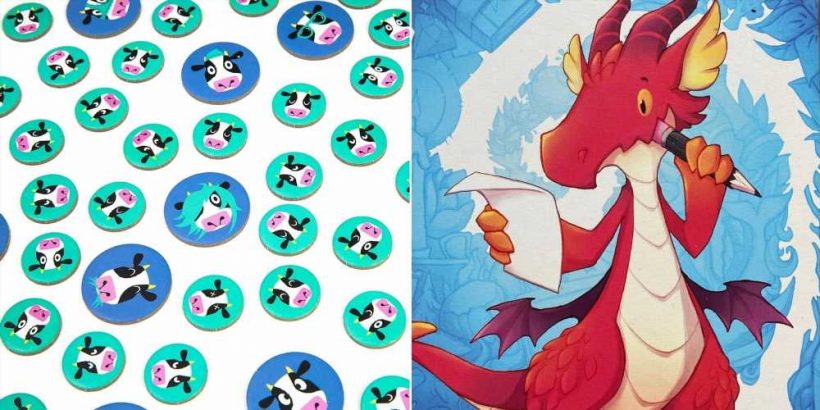 Cards Against Humanity is an amusing NSFW game the first few times you play it, but the novelty can fade away rather quickly once you recognize the cards. So, if you've looking for a new party game, there are plenty of hilarious, fun tabletop games out there to try next.

Here are some incredible card and board games to play at your next gathering. These are great for avid board gamers and those new to the hobby. Each game on this list is simple to learn and has rapid rounds of play. If you enjoy Cards Against Humanity, these are perfect for you to introduce to your friends. 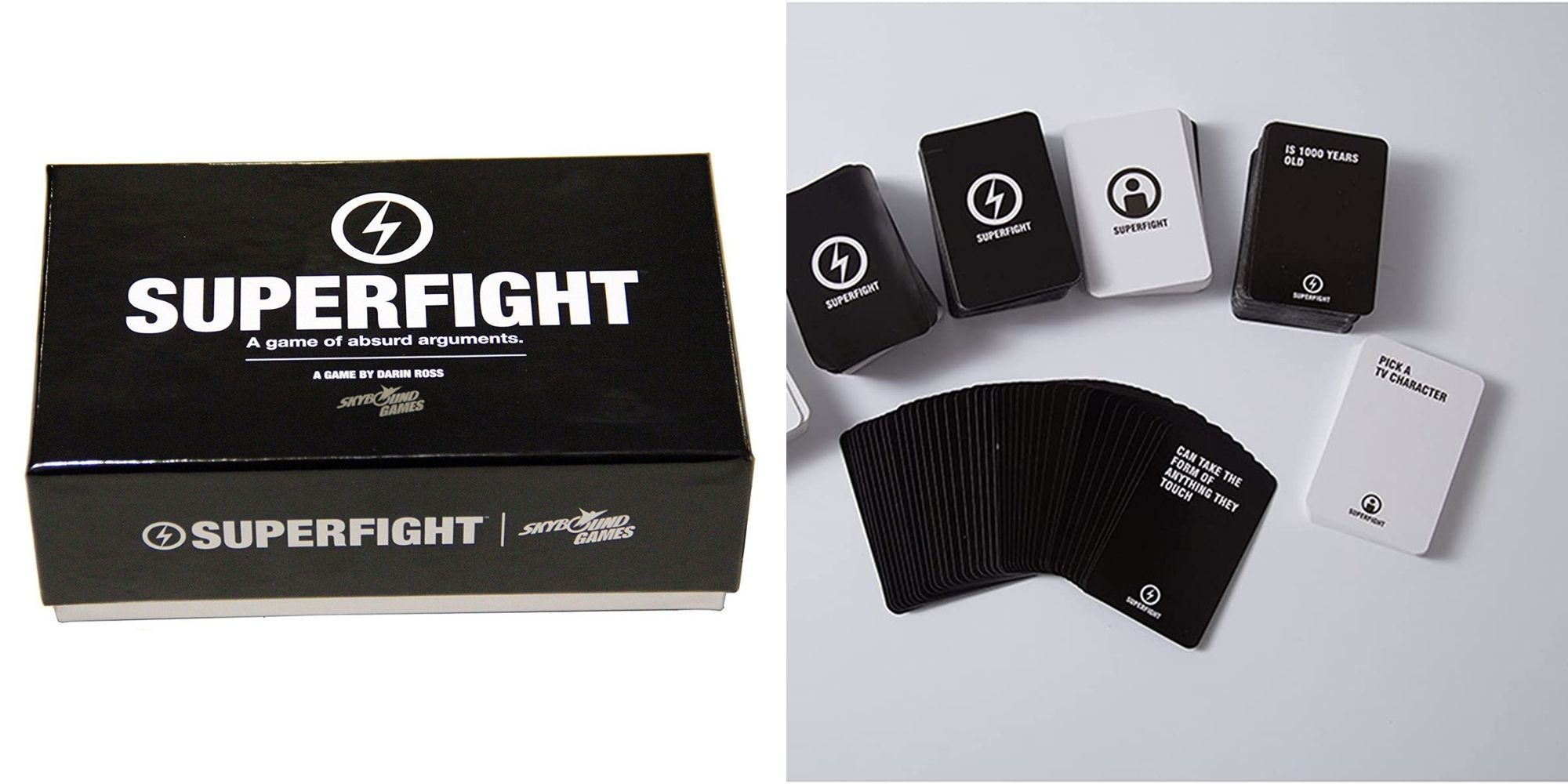 Super Fight is similar to Champ'ed Up from Jackbox Party Pack Seven but without drawing. Instead, you use character and attribute cards to craft the ultimate fighter. This game is similar to Cards Against Humanity in that you must impress the other players based on your answers.

Two players will face off against one another with their chosen hilarious warrior. They must plead their case as to why they should win to the rest of the group. Everyone can get involved as this game encourages plenty of discussions (and silly arguments). It doesn't always need to be about violence, either. The game suggests other themes, such as who would make the best date. 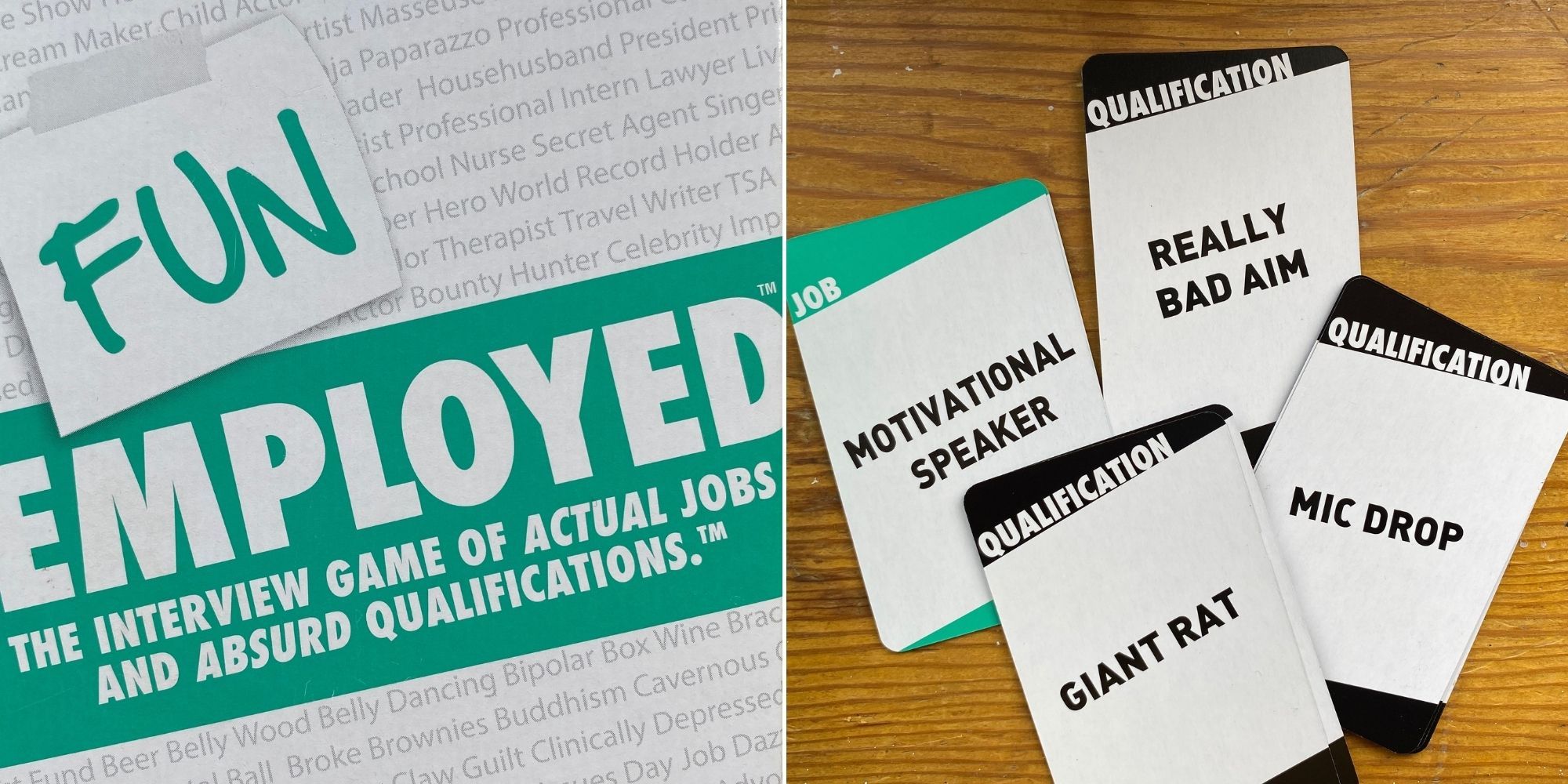 Just like in Job Job from Jackbox Party Pack Eight, Fun-Employed is all about competing to get the job of your dreams. Each round, one player will be interviewing candidates, and it is up to the others to convince them that they are suitable for the job. But, their qualifications are always somewhat difficult to justify.

Whereas Cards Against Humanity relies solely on the cards for entertainment, Fun-Employed's silly cards are used as a jumping-off point. It is down to you as the potential employee to sell the strange qualifications you have at your disposal. For example, you might need to explain why your "Evil Laugh" would make you the perfect Dentist. Good luck with that one… 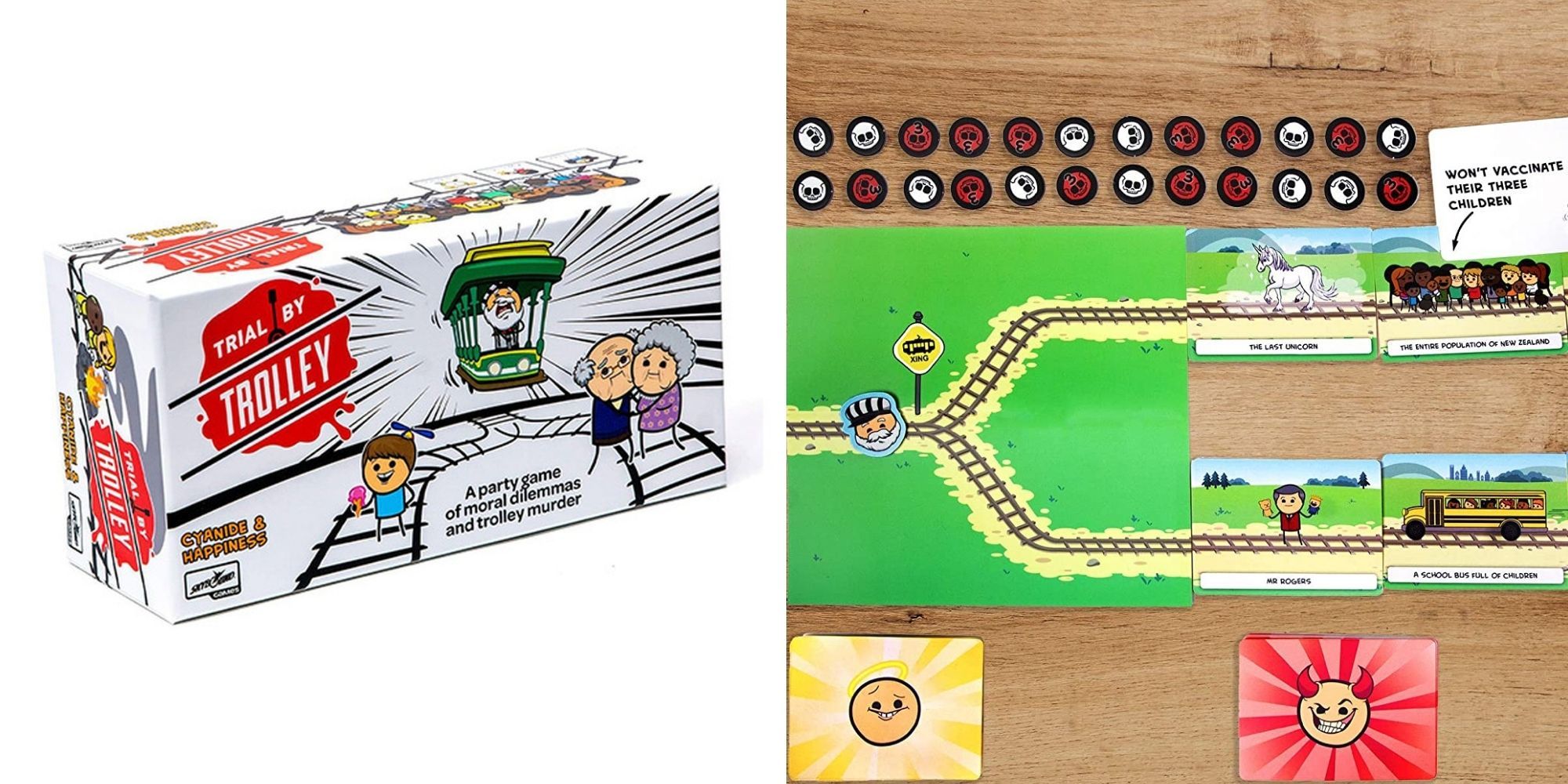 Trial By Trolley is a game all about making difficult choices. Two teams try to convince the Train Conductor to run over the rival team's track. Using your cards, you must try to make your track more appealing to spare and the other team's more tempting to hit. To do so, you have three types of cards: Innocent, Guilty, and Modifier.

The hilarious cards will always lead to difficult decisions, but the real fun comes from the discussions as everyone attempts to plead the case for their track being spared. It is also fascinating to see which team the Train Conductor inevitably sides with. 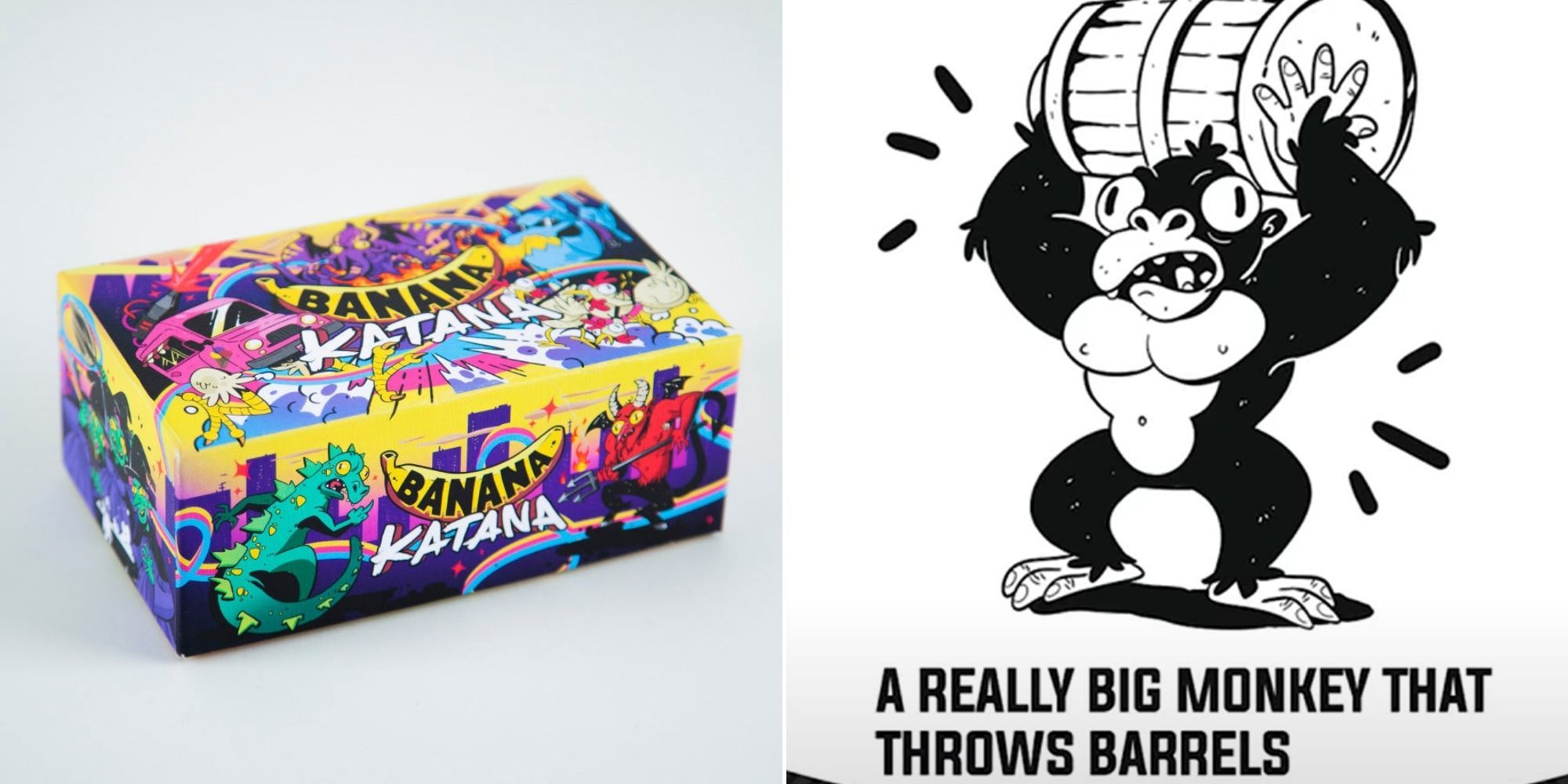 Banana Katana is a ridiculous party card game in which you play as inventors attempting to defeat a dangerous monster. As with Cards Against Humanity, one player will act as the judge, determining which invention should be used to defeat the threat.

The game comes in a compact, small box, so it is effortless to bring along to a game night. There are so many different combinations to choose from when creating your invention. You'll have to decide what the base is, its power source, weapon, and malfunction. The fun and creativity of this game comes from how you convince everyone that this mix mash of random components will be of any use at all. 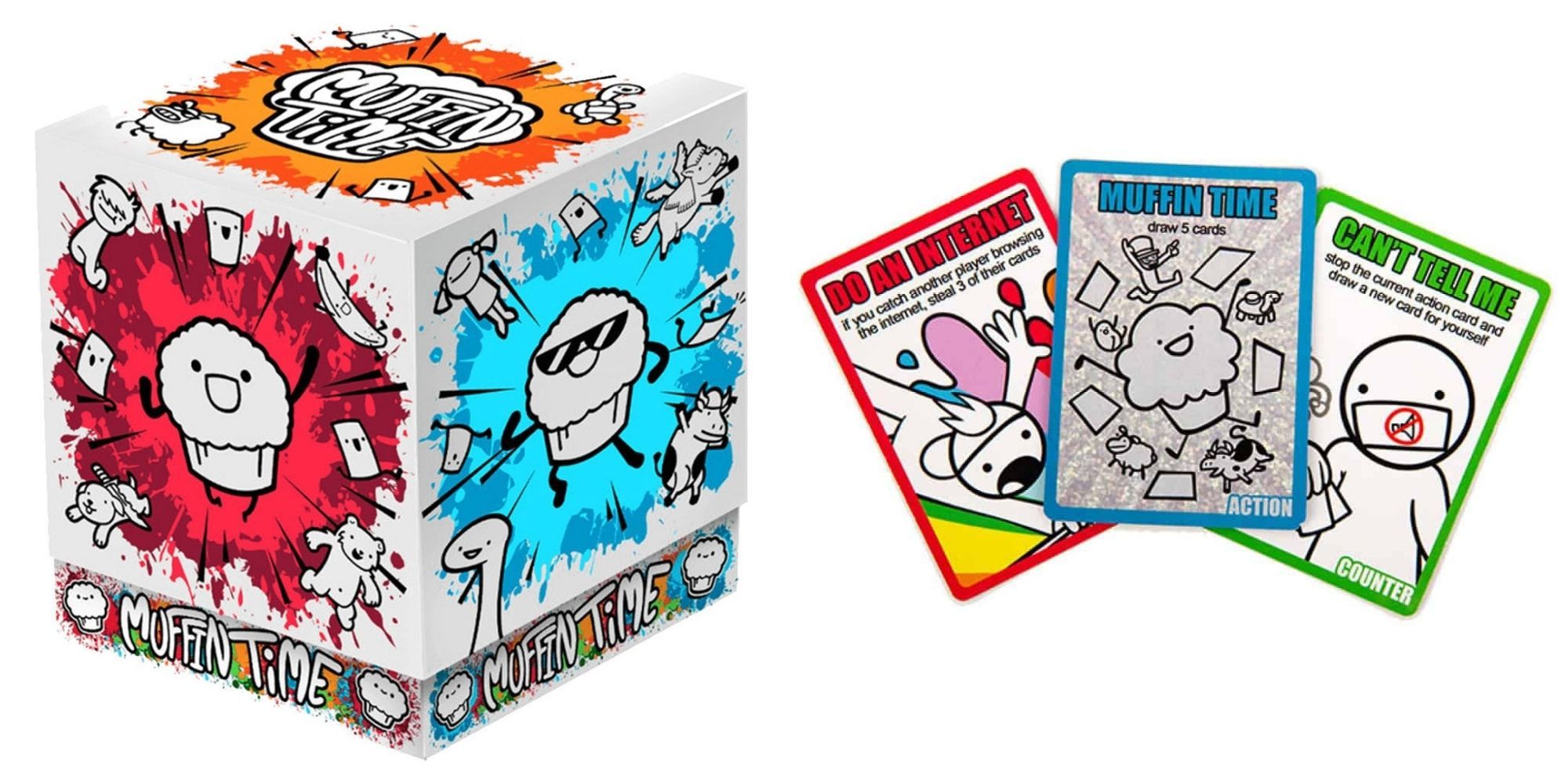 You're in for a hilarious night of fun if you bring Muffin Time to your next party. You begin the game with three cards. These will include action cards, counter cards, and trap cards. Each card is unique and will often turn the entire game on its head. The aim of the game is simple: start a turn with ten cards in your hand.

It is such a simple goal, but everyone will have cards to mess with their opponents. It is a game that requires you to pay close attention to your friends so that you can surprise them with silly traps. Muffin Time is pure chaos and will have everyone at the table laughing. 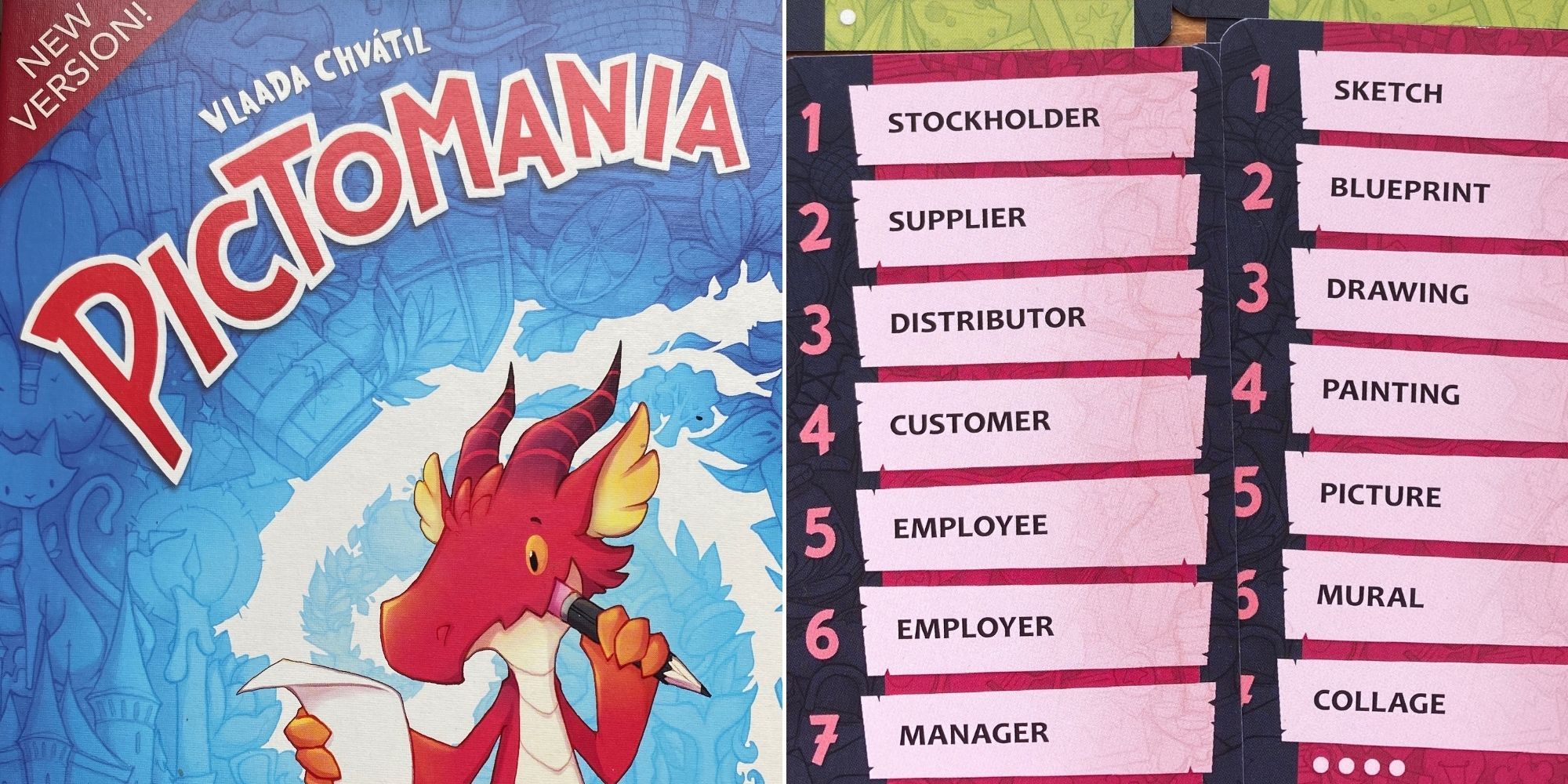 This quick-paced drawing game captures the hectic nature of Gartic Phone. In Pictomania, everyone will be given a secret prompt to draw based on a list of words. You will all be drawing simultaneously while also trying to figure out what everyone else is drawing. As soon as you figure it out, you must make your prediction right away. The faster you are, the more points you can gain, but you'll lose points if you are wrong.

This game is a fast, silly experience that will have everyone engaged at all times. It can be challenging to figure out what exactly someone is drawing. This uncertainty keeps you on your toes, as you have to make wild guesses and hope for the best. 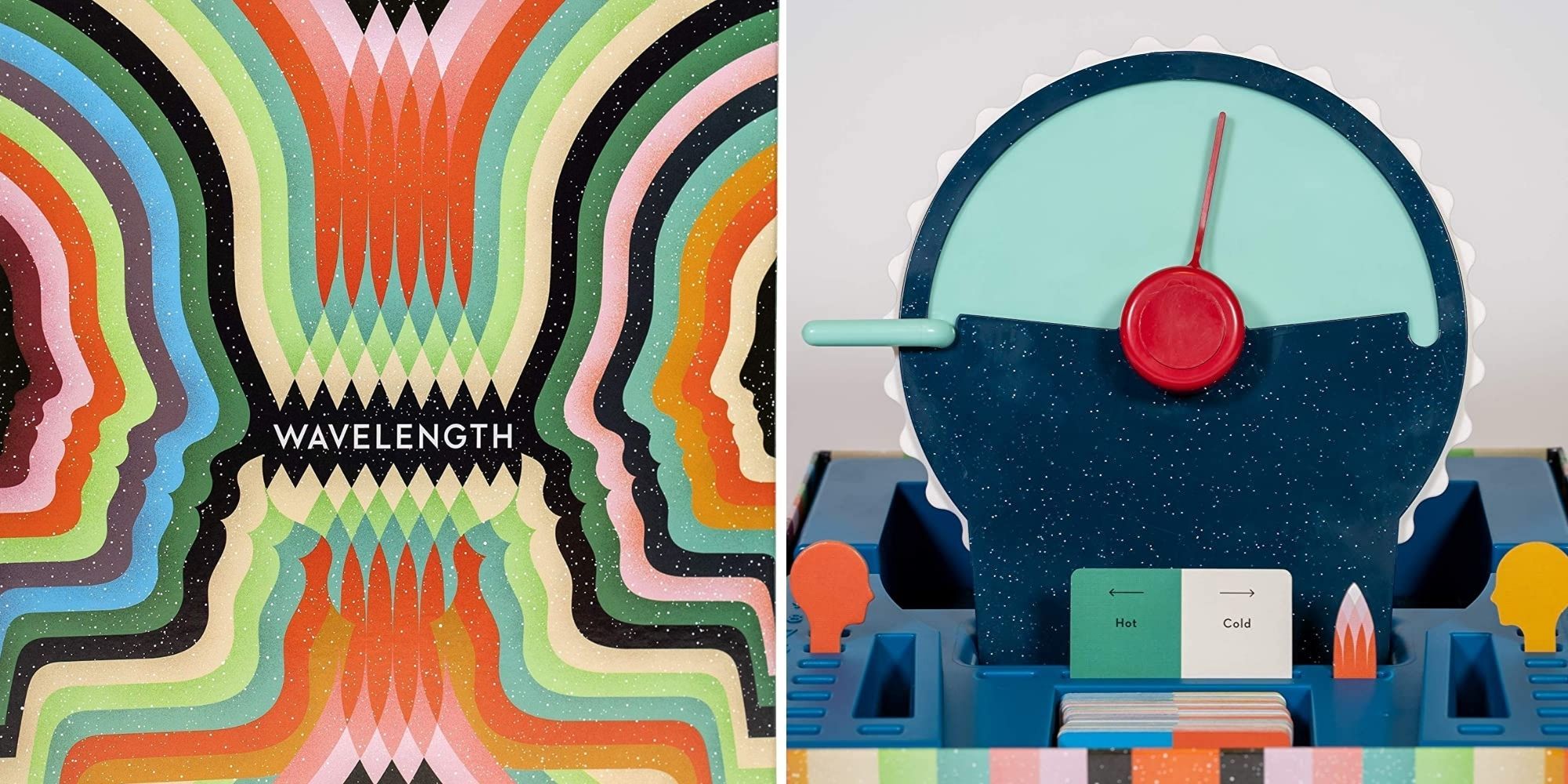 Wavelength is a guessing game in which two teams try to be on the same page. The psychic player will be given a card that will determine what each side of the giant wheel represents. For example, the left might be 'Happy song,' and the right might be 'Sad Song.' They will secretly spin the wheel to determine the position of a dial and need to come up with a clue that will help their team pick the correct position.

This game comes down to opinions and figuring out what the clue-giver is thinking. Wavelength encourages plenty of discussions, and it is always incredibly satisfying when you are right with your guesses. Each round is quick and straightforward to grasp right away. You can even test out this game for free online with your friends. 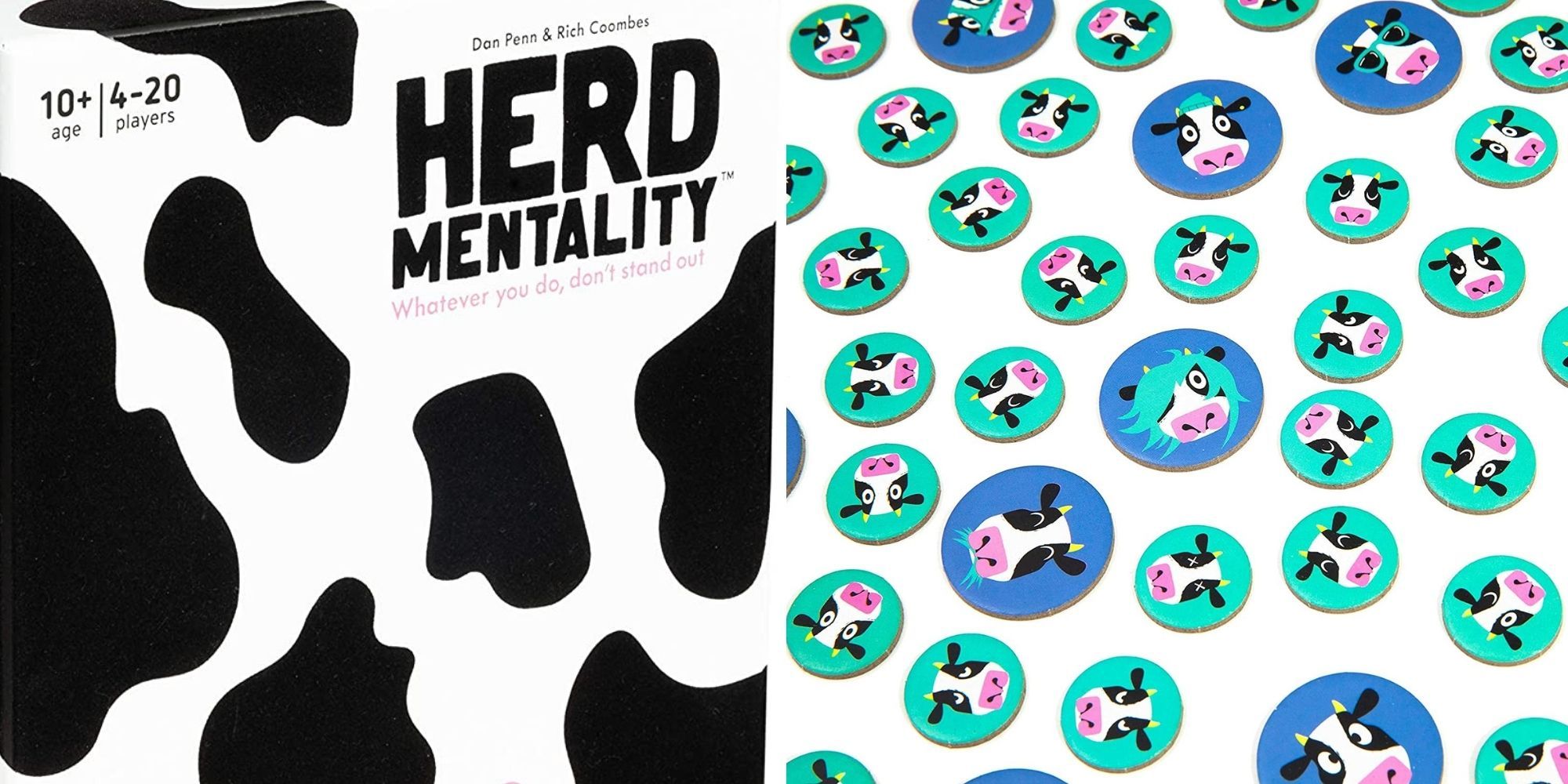 Herd Mentality is a game all about fitting in with the group. You will draw a card that will prompt everyone to answer a question. Once everyone has written down their answer, you reveal them to see how many of you wrote the same thing. If you did, you'd all receive points. But if one person wrote something unrelated to the rest of the group, they will receive the pink cow. You cannot win the game unless you get rid of the pink cow, so you need someone else to stand out from the crowd next.

This game is excellent for playing with both family and friends. The questions are always interesting, and trying to guess the same answer as all of your friends is a lot trickier than you might think. It is always fun to see how in sync you are with everyone. 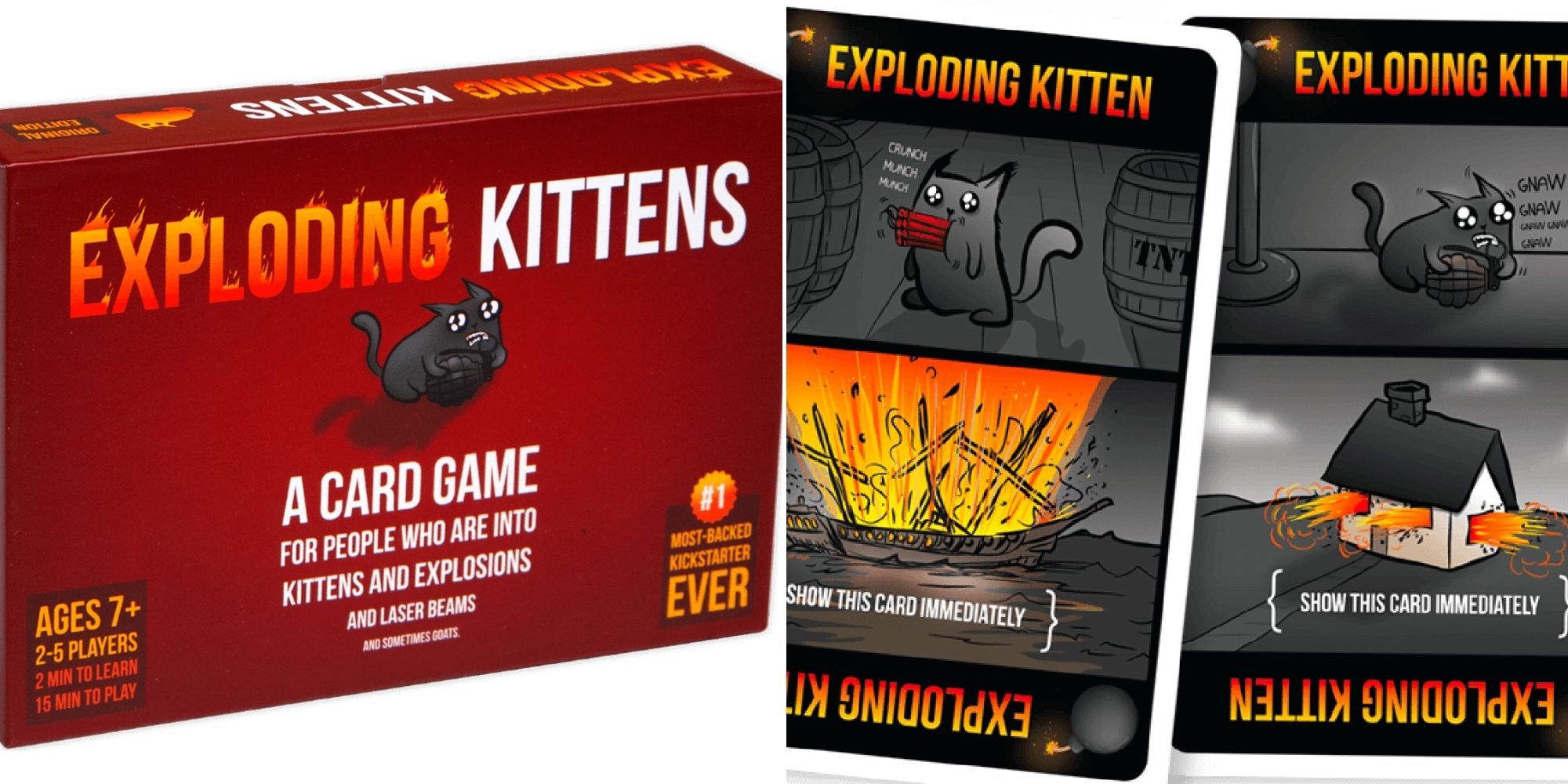 For those that want a more animal-themed card game check out Exploding Kittens. Each turn, players draw cards, hoping they don't pull an Exploding Kitten card. You'd better hope that you have a defuse card to survive if you draw it otherwise it's game over. Most of your cards will allow you to avoid drawing cards or let you sabotage your friends. Turns are simple: Play cards and then draw a card. You are out of the game if you can't stop an exploding kitten. The last player standing wins.

There is also an NSFW version of the game if you want more of the mischief you got with Cards Against Humanity. But, the game will still be ridiculous and light-hearted. It's a great quick filler game to bring to any party. 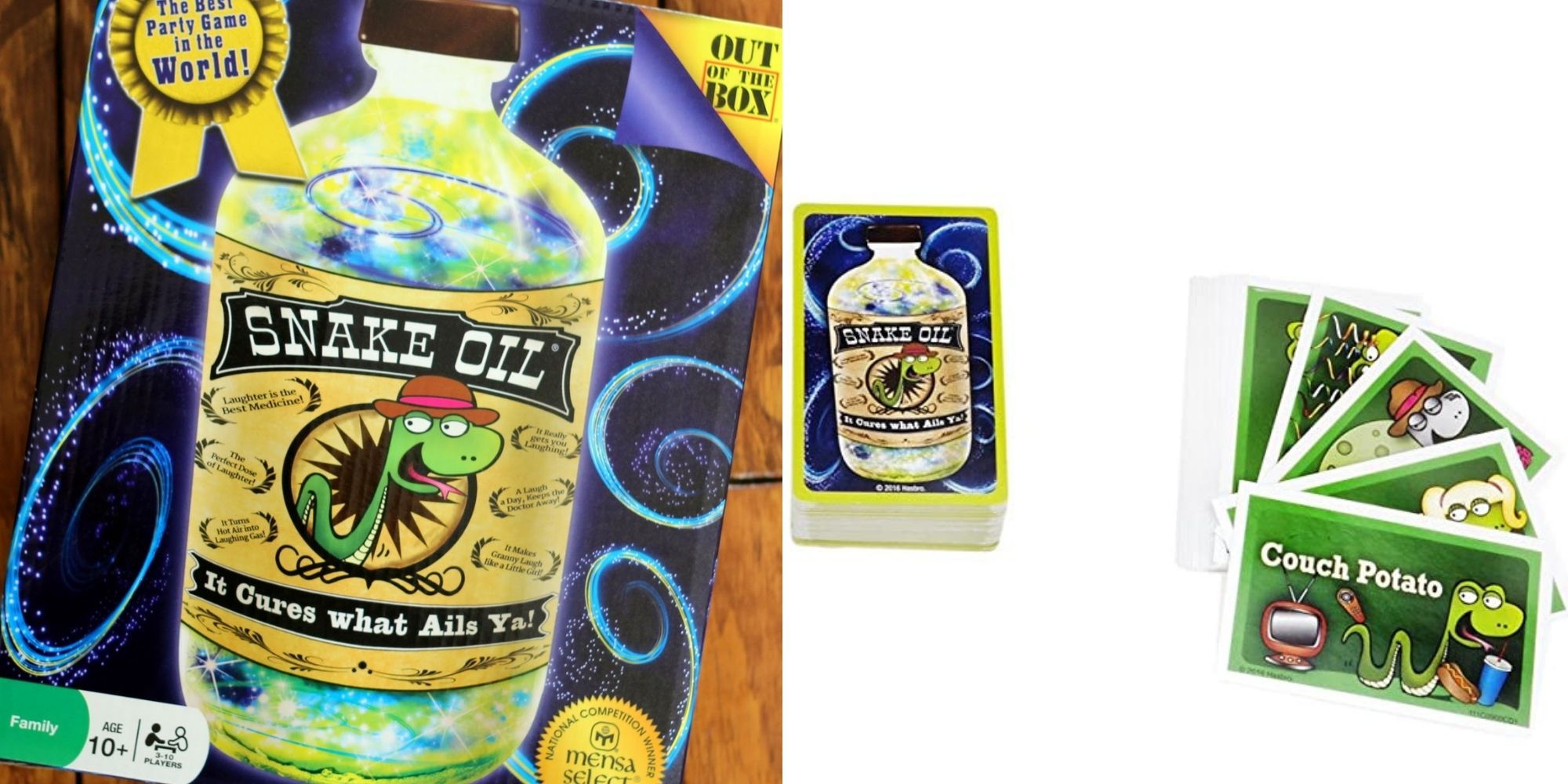 Snake Oil is bound to be a hit no matter how big or small your party size is. The game is similar to Cards Against Humanity and is consistently funny no matter how many times you play. Each round, someone takes on the role of a customer, and then everyone must combine two cards to form the name of their new product. It's down to you to determine what exactly your invention is based on its name.

The sudden spark of inspiration you get when you begin to pitch your idea, no matter how good or terrible it might be, is always a joy to witness. You can easily have everyone laughing as you pitch a ridiculous product to your friends. You can also get into the role of acting like a mysterious snake oil salesperson whose invention might not be as legitimate as they claim.