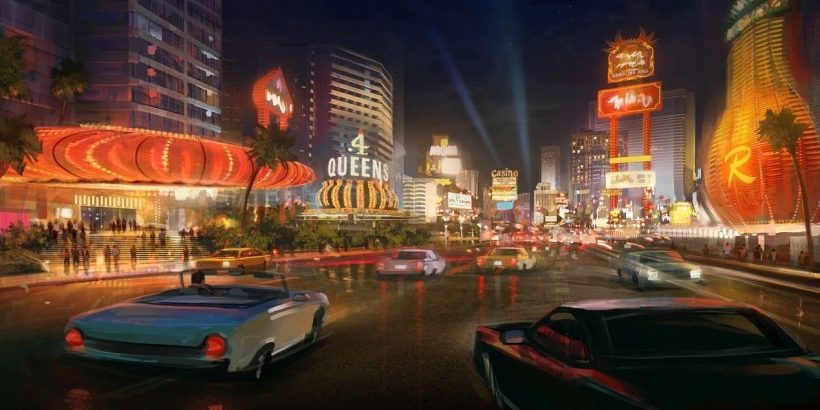 Scarface: The World is Yours was a GTA clone by Radical Entertainment, launched in 2006 for the PlayStation 2, Xbox, and PC. It had some pretty neat ideas, chief among them being letting you buy stereotypical drug lord things like pet tigers and a pool full of sharks. You'd play as Tony Montana as he rose up the ranks to become the crime boss of Miami. It surely deserved a sequel for its neat ideas and letting you play as Al Pachino, but we never got one.

However, it seems that Radical was in the process of making a sequel, but it got cancelled before it saw the light of day. A Twitter handle called Mafia Game Videos has shared concept art and assets of which would have been in Scarface 2, which looks like it would have been set in Las Vegas.

The concept artwork reveals the bright lights of The Strip, complemented by the vast emptiness of the surrounding Nevada desert area. We can also see fancy hotel and casino lobbies along with dark parking lots, back rooms, and what appears to be a morgue. A separate YouTube video by the same account reveals the names of the developers and artists who worked on these assets, many of whom have used them on their portfolios for years now.

A Scarface game set in the City of Sin would have made for a great game if Radical could have further built on the unique features. Instead of doing up your mansion, Tony would work his way up the ladder and gradually build the best casino the city would have had to offer. You can already picture the upgrades ranging from regular slot machines and blackjack tables, to high-roller tables, infinity pools, chopper services, and everything else you'd need to have a good time.

It's unknown why the Scarface sequel was cancelled, given the reception that The World is Yours received. The game did a bit more than most GTA clones have ever done. In certain aspects, it had features that even surpassed those of GTA: San Andreas. If we had to guess, the game was probably shelved due to some issue with the rights.