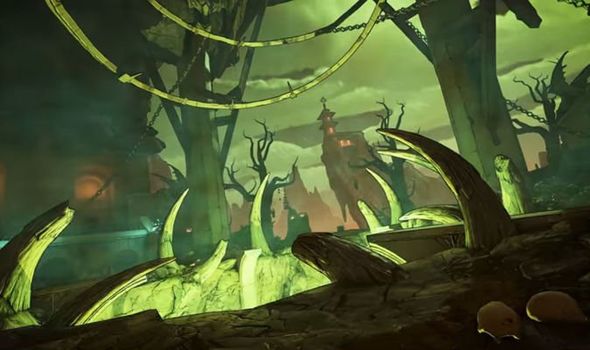 A new Borderlands 3 update has been released today by Gearbox alongside the new Bloody Harvest Halloween event.

Many fans were caught unawares when the patch was launched, clocking in at under 8GB on Xbox One and PS4.

This new build of Borderlands 3 is different from the one launched on October 17, with no new patch notes shared yet.

The main component of this new update is the Bloody Harvest event, which is scheduled to go live later today, October 24.

Vault Hunters are confirming that after downloading the new update, they have found a special Tab added to the menu screen.

This also includes information on the upcoming Halloween celebrations, which appears to still be inactive at this point.

The Bloody Harvest will run until December 5 and is a seasonal content update put together by Gearbox for all platforms.

This includes cosmetic items, new weapons and special challenges, all of which will be available for the full event schedule.

According to the dev team, Vault Hunters will need to have progressed far enough in the story campaign to have unlocked Sanctuary III, which happens early on.

There’s no current set time for the event to begin but it seems likely to have kicked off by 9pm, BST, in the UK.

That would be around 3pm PST in the United States.

“While Bloody Harvest is active, you’ll notice a peculiar newcomer aboard your ship: Maurice, a surprisingly friendly Saurian who can speak to you via a device of Tannis’ own invention,” a message from Gearbox explains.

“When Bloody Harvest begins, Maurice will offer you a repeatable mission that must be completed in order to reach Heck, the spooky setting for Borderlands 3’s Bloody Harvest.

“Maurice kindly asks that you collect a certain amount of Hecktoplasm, an item that drops from slain Haunted enemies.

“You’ll encounter Haunted enemies all over the galaxy during Bloody Harvest; you’ll know them by their ghostly green glow.

“Once you’ve collected enough Hecktoplasm, Maurice will open a portal to Heck aboard Sanctuary III that will transport you to the creepy domain of Captain Haunt and his undead minions.

“Once you’ve managed to stop shaking in your boots at the sheer spookiness of Heck, you’ll have to fight your way through an undead army of Maliwan soldiers who are rising from their graves with ambitions of revenge. You’ll also encounter freaky fauna including flying, fire-breathing Rakk-o’-Lanterns and wretched Ratch that’ve gorged themselves on blood.

“Deep within the depths of Heck lies Captain Haunt, the bony final boss of Bloody Harvest.”

As mentioned above, this is a content update from Gearbox, meaning there will be plenty of new loot and cosmetics to unlock.

Challenges will need to be completed for some of these new items to be unlocked and there will also be gear dropped that will only be available during Bloody Harvest.

This includes items like the Fearmonger, a new Legendary shotgun that packs a supernatural punch.