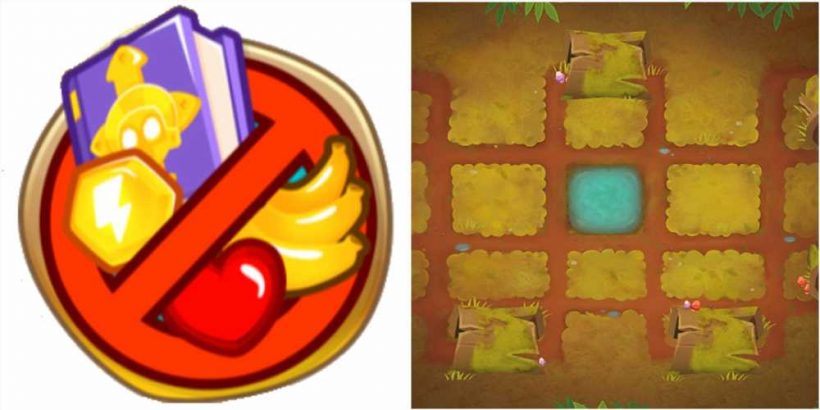 Chimps is Bloons Tower Defence 6's ultimate challenge, stripping away every possible aid to give you the hardest experience possible. A Chimps win means battling through 100 grueling rounds with none of the usual help, and getting one is seen as the game's biggest achievement.

Not all maps are created equal, however, and this remains true for Chimps. Some of the expert maps are borderline impossible, but if you're looking for a Chimps game that is, at least relatively speaking, easy, BTD6 has plenty of maps to suit you. There are even some maps in the harder difficulties that are far easier than they appear, allowing you to nab a cheeky advanced or expert win! 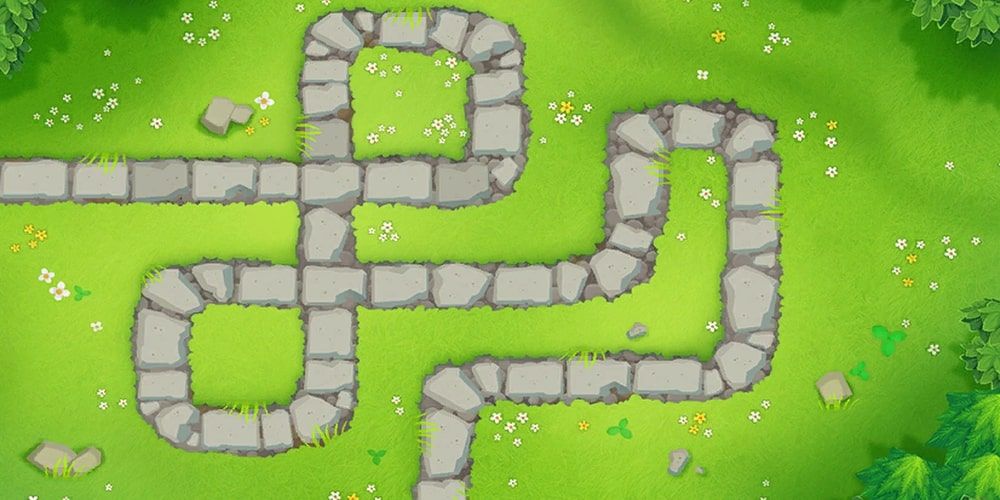 While this is the first map you'll be faced with when looking at the game's easy maps, it's by no means the easiest Chimps map. Lack of water alone imposes something of a restriction that will force you out of using certain towers.

That said, Monkey Meadow is still a pretty easy map, so if you're looking to lock down a Chimps win, the map's multiple loops and overlapping sections of track should provide a pretty great opportunity to clear up the intimidating rounds with ease. 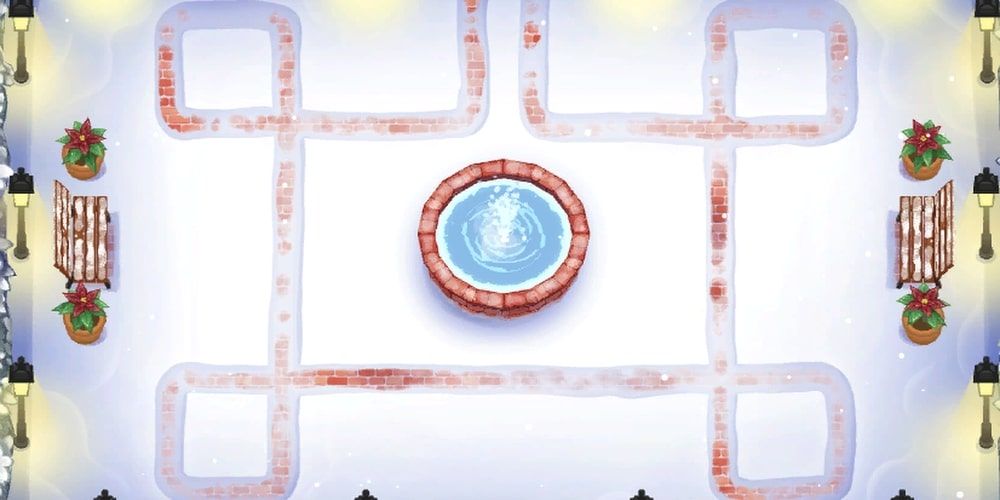 As one of the game's easy difficulty maps, it's no surprise Winter Park makes for a pretty easy Chimps game. The map is long, and has overlaps on each corner, and the fountain in the middle allows you to utilize subs and buccaneers, two very strong towers.

There's still a reasonable amount of challenge, as the overlaps are short, and water space is limited, so if you fancy yourself as a pretty good BTD6 player, Winter Park could be a great choice to jump into Chimps. 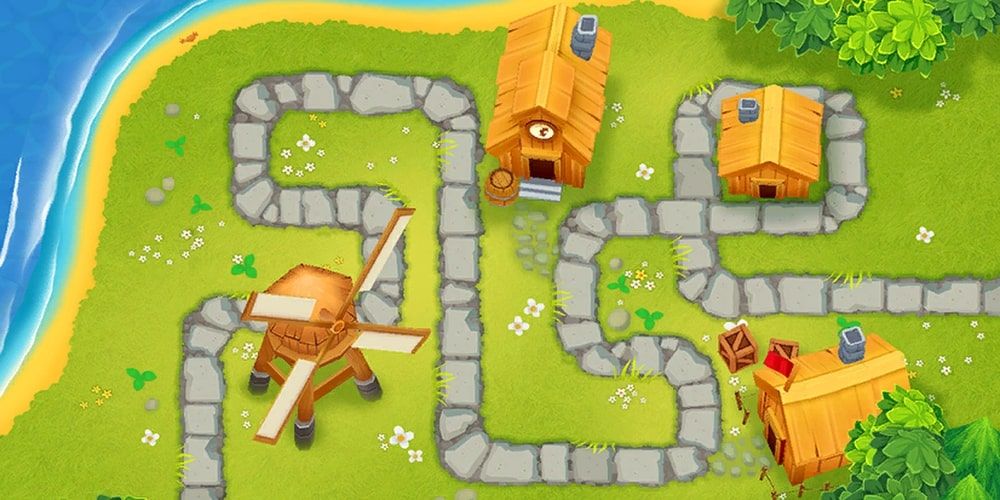 Another easy map that's a pretty simple Chimps run is Town Center. This is essentially like an easier Monkey Meadow, since it has the same kind of twisty track that gives towers good coverage, but there's also water, allowing you to use those excellent aquatic monkeys.

Be wary of line of sight however, as Town Center has a few objects – namely the houses and windmill – that will block your towers' visibility, so plan your positioning carefully. Keep that ion mind, though, and Town Center should provide a pretty easy Chimps medal. 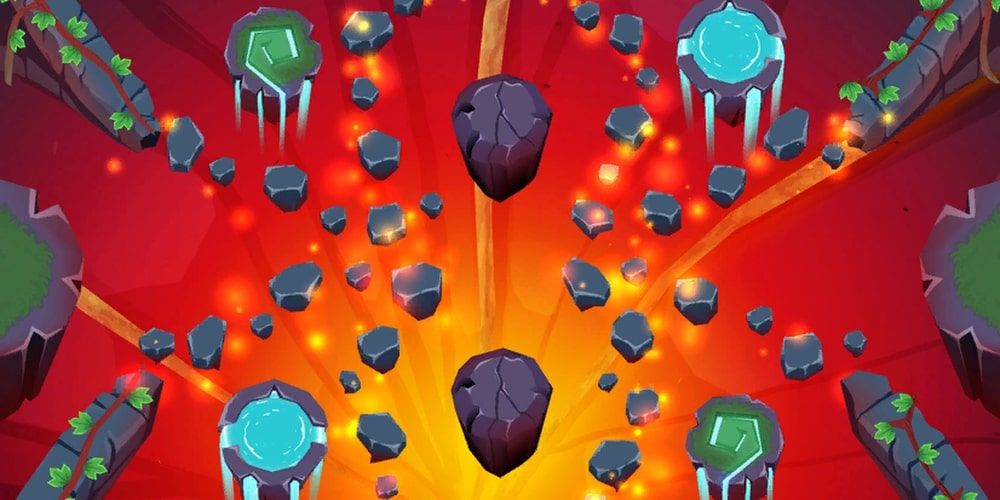 While this is definitely a hard map to beat Chimps on, it makes the list as it's significantly easier to beat on Chimps than other expert maps. The tracks are long, and have water available right next to them, and while there are two of them, bloons only ever come down one at a time.

If you want an expert map Chimps medal to show off, Infernal would be a great pick. There's no greater challenge than expert Chimps, so if you think you're up to it, Infernal is at least not as difficult as some others. 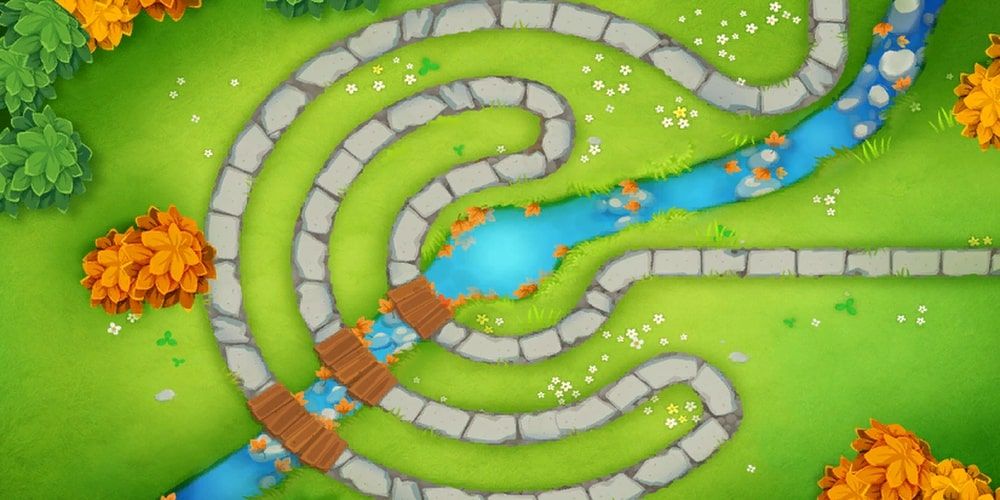 Another easy map filled with looping track that gives plenty of coverage, Park Path has a stream running right down the middle that lets you take full advantage of boats' massive range to cover several lanes. It really has everything you need to utilize any tower you like to the max.

Though easy, Park Path definitely isn't the easiest, so it's a good map to try if you're not a complete newbie and want to get a feel for how Chimps works. Use the corners to your advantage, pick a good hero, and the medal will be yours before you know it. 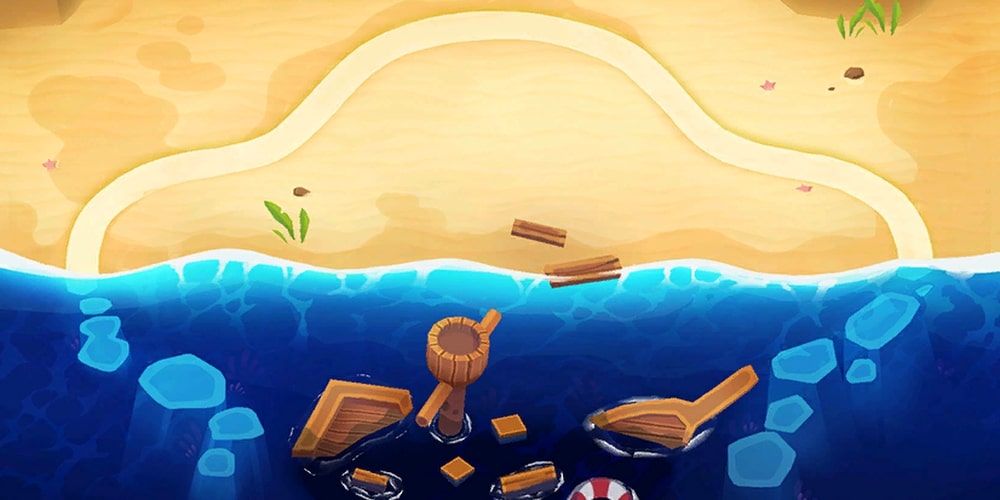 Another map that's easy for its difficulty, Off the Coast is the perfect way to get a Chimps medal on an advanced map. There's more than enough water to go for any boat or sub strat you like, the track is singular and long, and there are no gimmicks to mess you up.

While other advanced maps like Geared or Cargo force you to plan for quirks, Off the Coast is a simple track that's great for getting better at Chimps, serving as a gateway into the harder maps, or simply getting you a cool medal to show off. 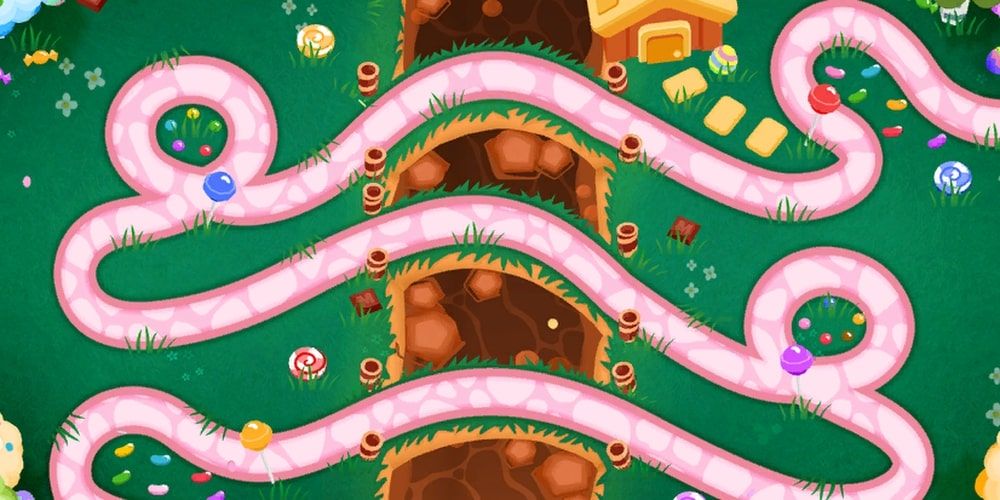 One of the longest tracks in the game, Candy Falls couldn't be much easier if it tried. The track goes on for what seems like miles, and the way it loops back on itself gives you more than ample opportunities for excellent coverage. It won't take much more than the classic monkeys throwing darts at balloons to beat this map.

The map also has a fun easter egg that allows you to unlock the small towers option. Click around the map to summon the oompa loompas in a certain order, and you'll be rewarded with a song and the achievement that nets you the aforementioned settings toggle. 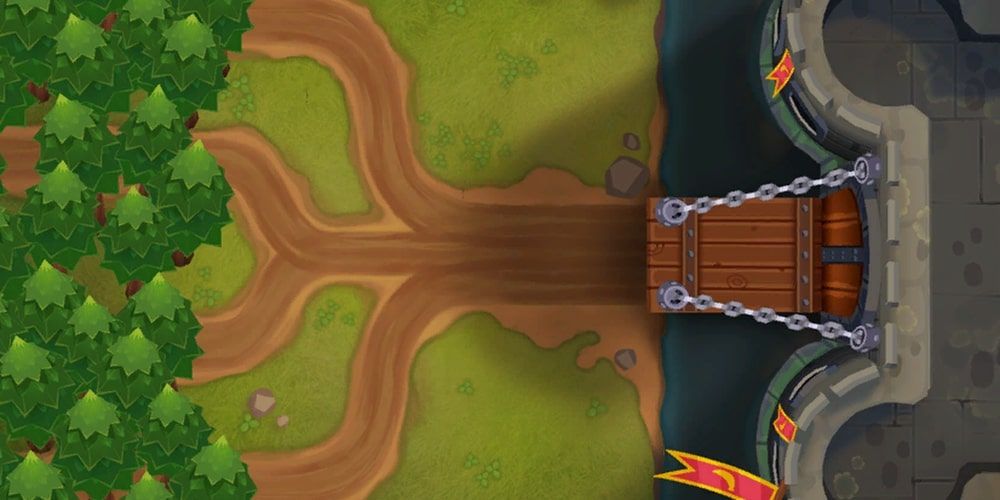 The pinnacle of "easy for its difficulty", Dark Castle is an expert map, but one that's not too hard to beat on Chimps if you know what you're doing. While the tracks start off as four separate lanes, they converge quickly, and crucially, to a single exit, allowing you to use the powerful spike factory.

There's also plenty of water and no major line-of-sigh issues, so Dark Castle is absolutely the choice if all you care about is getting an expert Chimps medal, or the black border that comes with beating every difficulty on a map. 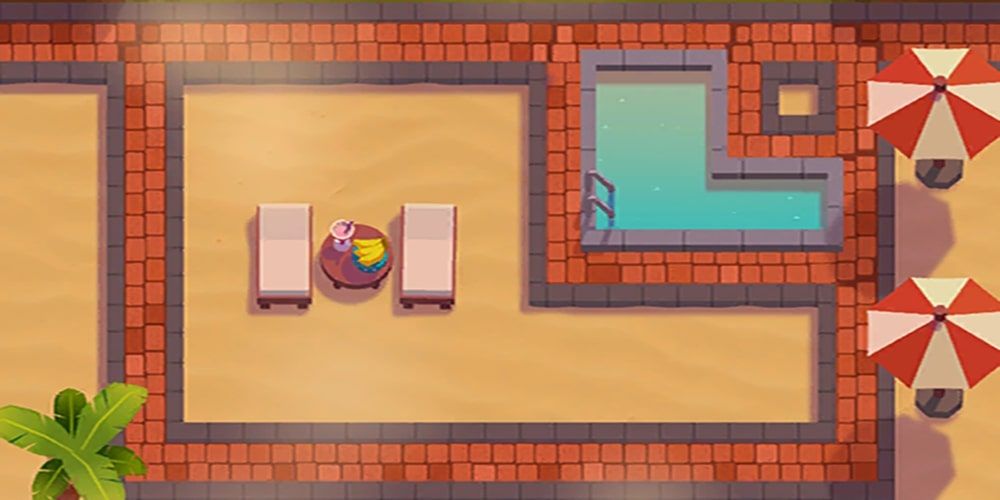 Resort is absurdly easy due to how the map works. Bloons pass the same point in the top right so many times that a handful of towers there are enough to obliterate Chimps with ease. There's even water nearby to give you every option available, but sand alone is sufficient to get far into the run.

The map's holiday setting is pretty relaxing, which is fitting, since a Chimps run on Resort is unlikely to prove too stressful. Simply focus that top right corner, and you should have no trouble earning yourself a victory. 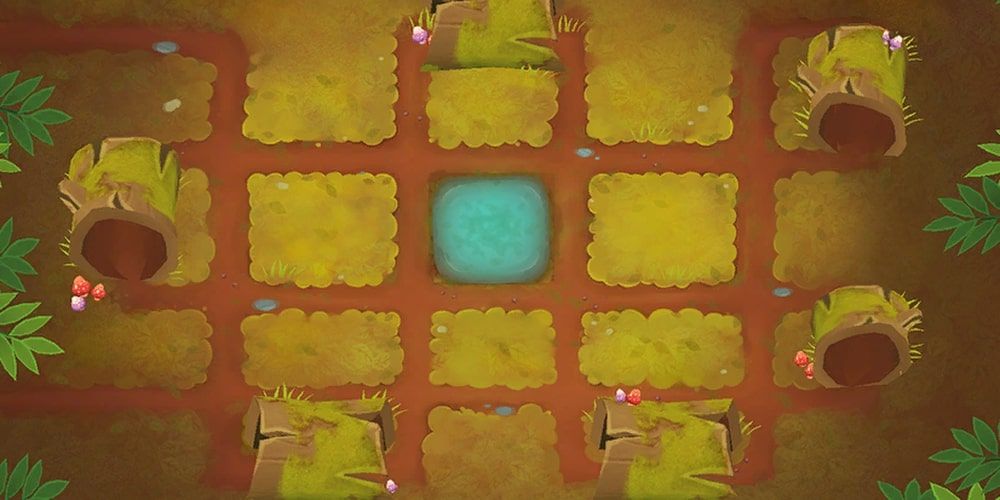 If you've ever watched YouTubers or streamers play Bloons, you'll have noticed they do all their challenge runs on Logs. This is because Logs is, to put it plainly, the easiest map in the game by a pretty significant margin.

While it doesn't have a huge amount of water, it's there, and bloons pass every intersection on the track so many times that you barely even need to think about your placements. If you're a complete newcomer to BTD6 and want to try Chimps, or just care about getting a medal, then Logs is the map for you.