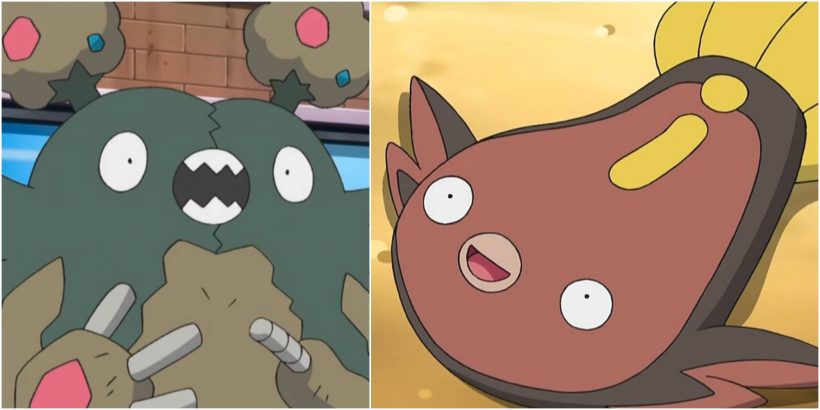 In every new region that's uncovered the Pokedex expands, bringing a whole generation of lovable Pokemon to life. But among our favorite cuties, like Pikachu and Eevee, and the powerful gods, like MewTwo and Dialgia, there are the…other Pokemon. The ones that got bullied in the tall grass, and were likely designed very late at night by a desperate animator who hoped no one would look too closely.

Pokemon Black and White's Unova region has its fair share of absolutely baffling and hilarious designs that make you wonder how any of the Professors take them seriously enough to study.

Funny and adorable often go hand-in-hand, and that goes double for the mustachioed, giant dog Pokemon. Its pre-evolutions Lillipup and Herdier are basically just terriers that most players will come across early in the game, even in the first gym in Striaton. But out of nowhere, it grows to the size of a horse, and its cute whiskers become two meters long, trailing behind it in the wind.

It's worth catching and training up the first Lillipup you come across in the tall grass, just so later in the game you can fawn over a humongous living rug that likes giving kisses.

Known as the dream eater Pokemon, it's possibly the cutest thing that's ever deserved that title. Musharna look like a cross between dolphins and tapirs, and the hallucination-producing gas could be mistaken for external intestines. It evolves from Munna which isn't any less funny-looking and resembles a child's toy plastered with tacky flower stickers. Both just fly around, producing Dream Mist and seeming vaguely threatening.

In the Dreamyard the player will come across a cutscene featuring Team Plasma and a Munna, but if you hang around long enough you can catch your own, if you think it's worth the nightmares.

Another contender for the odd-looking Pokemon with seemingly missing features award is Sigilyph. You might mistake its body for its head, as it features two unseeing eyespots, but the real eye sits between the wings on what might be an Unown.

This Pokemon is based on ancient geographical drawings in the desert sands of Peru which is a cool concept but strangely executed. The designers somehow turned the Nazca Lines into a creature for children to fight with but its tiny trident arms and lack of mouth just secure the Sigilyph a spot as one of the funniest Pokemon of the Unova region.

This is the multiplying Pokemon, whatever that means, and it's covered in green goop that forms a larger body than it can control. The little pale body in the middle isn't all that weird, but along with the floating orbs that make up the skeleton of its extended appendages, the Reuniclus is a very funny little creature.

Instead of using its psychic abilities to fight combatants like most psychic types, the Reuniclus and its pre-evolutions use their minds to control the giant club hands which pummel enemies into dust. How can something so cute be so full of rage? It's said that people that drink the green goo acquire wisdom beyond their years, and then immediately die because it's incredibly toxic.

This fellow became a bit of a meme right out the gate, along with Trubbish and Vanilluxe, as being very low effort and lazy. Fans angrily pointed out they had simply brought inert objects to life instead of the complex designs of Pokemon's early days, like Pidgey (a pigeon) or Ekans (snake spelled backwards).

Garbodor looks perpetually surprised to be alive, as though a pile of garbage really did get left for so long it became sentient. It's definitely not going to win any beauty competitions, what with it looking positively sticky, but there's a certain charm to Garbodor and Trubbish. Even perfect video game worlds have dumpsters, evidently.

Cryogonal might be the angriest, and therefore funniest, looking snowflakes in existence. These Pokemon turn to steam and evaporate when they get too hot, but reform once it cools down, so logically they could end up in human drinking water sources during the summer. Let that sink in.

Aside from their bizarre chemistry, their eyes and mouth also glow from behind the crystalline structure which is stuck in a menacing frown. The color scheme is metallic, making them look more like an army of whimsical, wintery robots than animals that form in snow clouds.

Stunfisk seems to be based on real-life Stonefish, which look like, you guessed it, stones and cause horrible pain in any foot that steps on them. They're even known as the trap Pokemon, but instead of venomous barbs penetrating your flesh, this happy little guy electrocutes its unsuspecting victims as they frolic in bodies of water.

The shape of the fish itself is pretty uninteresting, but it's the blank, staring eyes and an empty smile that suggests it's creepily happy to see you suffer that get us. It will mercilessly kill every water Pokemon living in its vicinity if someone accidentally touches it. But what a silly smile it has!

It's time for more mustache Pokemon! These three have zero legs between them, and instead float about on their cloud bodies, looking like incredibly angry genies. Each one has its own unique head-tail thing, covered in lumps that don't seem to have any purpose other than to look like very crusty pigtails.

In Black 2 and White 2 when exposed to Reveal Glass these three turn into their Therian forms, which might remind you of birds and cats with really fancy hair and purple bras, still sporting impressive, white mustaches. These forces of nature take themselves way too seriously for how hilarious they look.

This little cutie is disarmingly sweet at first sight, but the consistency of its mucus is what determines how it does in battle, which is a fact that immediately reduces its charm. Cubchoo will constantly snort up its own snot which otherwise dribbles down its face. You can't help but laugh at the otherwise innocent bear as its nose drips with raw ice power.

It will evolve into an intimidating bear beast, and the watery boogers will have evidently frozen into a rather fashionable sharp beard. Until then though, this very cold cub will continue to wipe its nose on the back of your trouser leg. 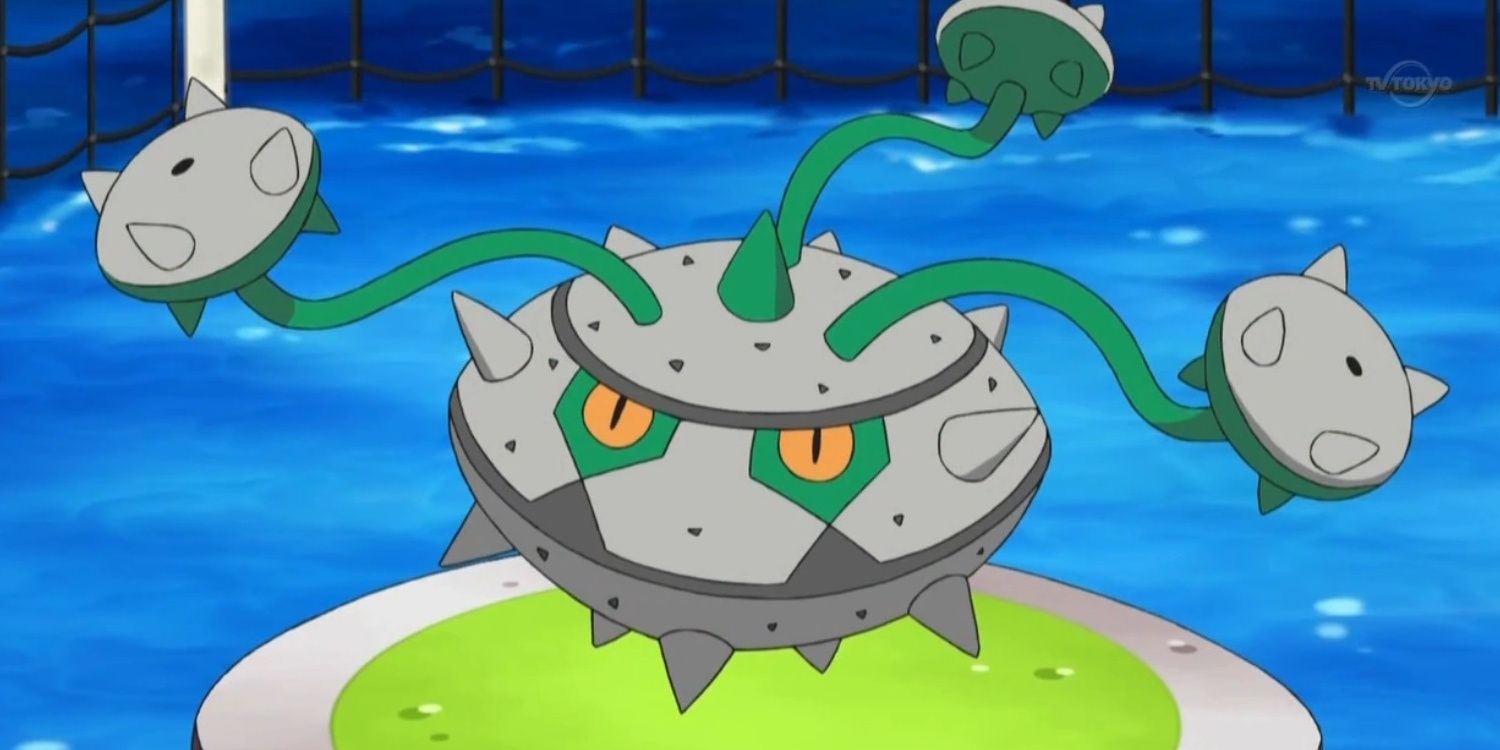 Where to even begin with this thing? It's the thorn pod Pokemon, and is another biological entity that is somehow made out of metal. With the three arms on its head, it can walk about, like a very spiky spinning top that can also give you a hug.

The spikes on their feet-hands can cling to the ceilings of caves and absorb nutrients from the rock. You wouldn't want to look up in the darkness and see those orange eyes glaring down at you, but when it looks like a stepped-on durian fruit it's hard not to laugh instead of run away.