Bartering is the next quest in Assassin’s Creed Valhalla after The Sons of Ragnar. It picks up right where the previous quest leaves off, and tasks you with finding Tonna and her mercenary group in order to learn more about King Burgred.

Bartering is pretty long and can be tough to complete if you’re not totally familiar with stealth and combat yet. As a result, we’ve written this detailed Bartering guide as part of our complete Assassin’s Creed Valhalla walkthrough, which will help you find Tonna, defeat Tonna, and figure out where King Burgred is hiding.

After finishing The Sons of Ragnar, head down the main path out of Tamworth. Either call your mount or grab a horse at the stables by the river — regardless of what you choose to do, you need to go to the river anyway to unlock the fast travel point for Tamworth, which will save you a lot of time later on.

Once you’ve unlocked the Tamworth docks fast travel point, head towards the quest marker highlighting Tonna’s camp. It’s not far, but there are wolves along the way, so be frugal with your horse’s stamina so you can burn through it to gallop away, or prepare for a fight. Once you reach your destination, speak to Sigurd — after a brief cutscene, it will be decided that you and Sigurd will speak to Tonna while Ubba and Ivarr wait outside. 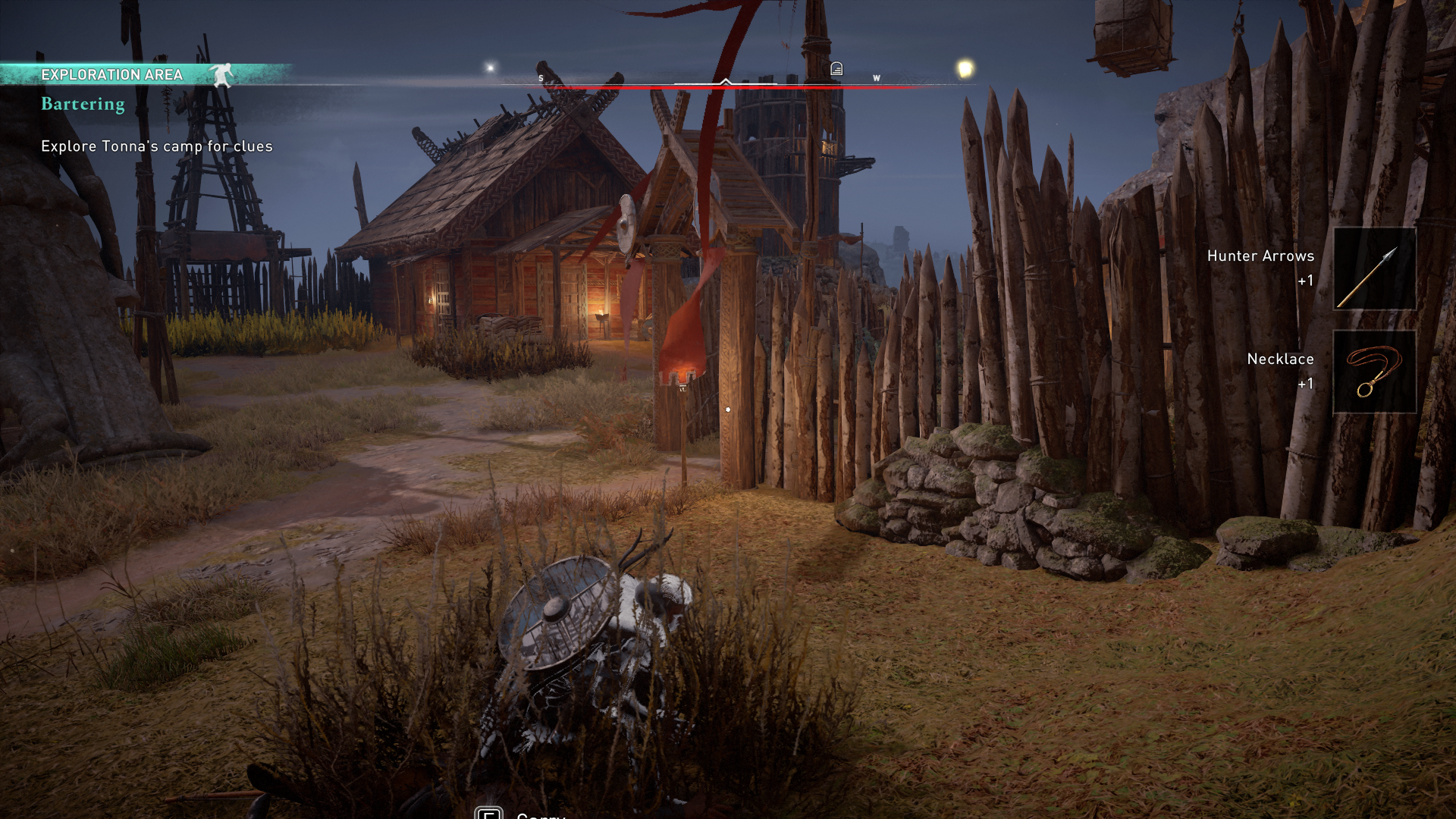 Approach Tonna and another cutscene will play. Your first choice doesn’t matter all that much, but your second one does: you can either pay Tonna 520 silver for the information (or 260 if you’ve got high enough charisma from flyting), or refuse to pay. Choosing the latter option means you will have to infiltrate the camp.

You can go in axes swinging like a proper Vikingr, or you can take the old-school Assassin’s Creed approach. for the first option, go into the camp and take a hard right up the hill — you’ll see Tonna outside her house with two guards. You can also sneak up this way if you feel like it — if you enter Tonna’s house from the left instead of going towards it head-on, there’s a good chance you won’t be seen. The evidence you are looking for is in the basement — if you use Odin’s sight, you’ll see a wooden trapdoor in the floor that you can smash with an arrow and then drop down into by holding the crouch button while walking towards the trapdoor’s wooden support beam.

If you want to do a full infiltration, you can — however, we’ve just put together a blow-by-blow analysis of how to clear Tonna’s camp without anyone seeing you in the fastest way possible. 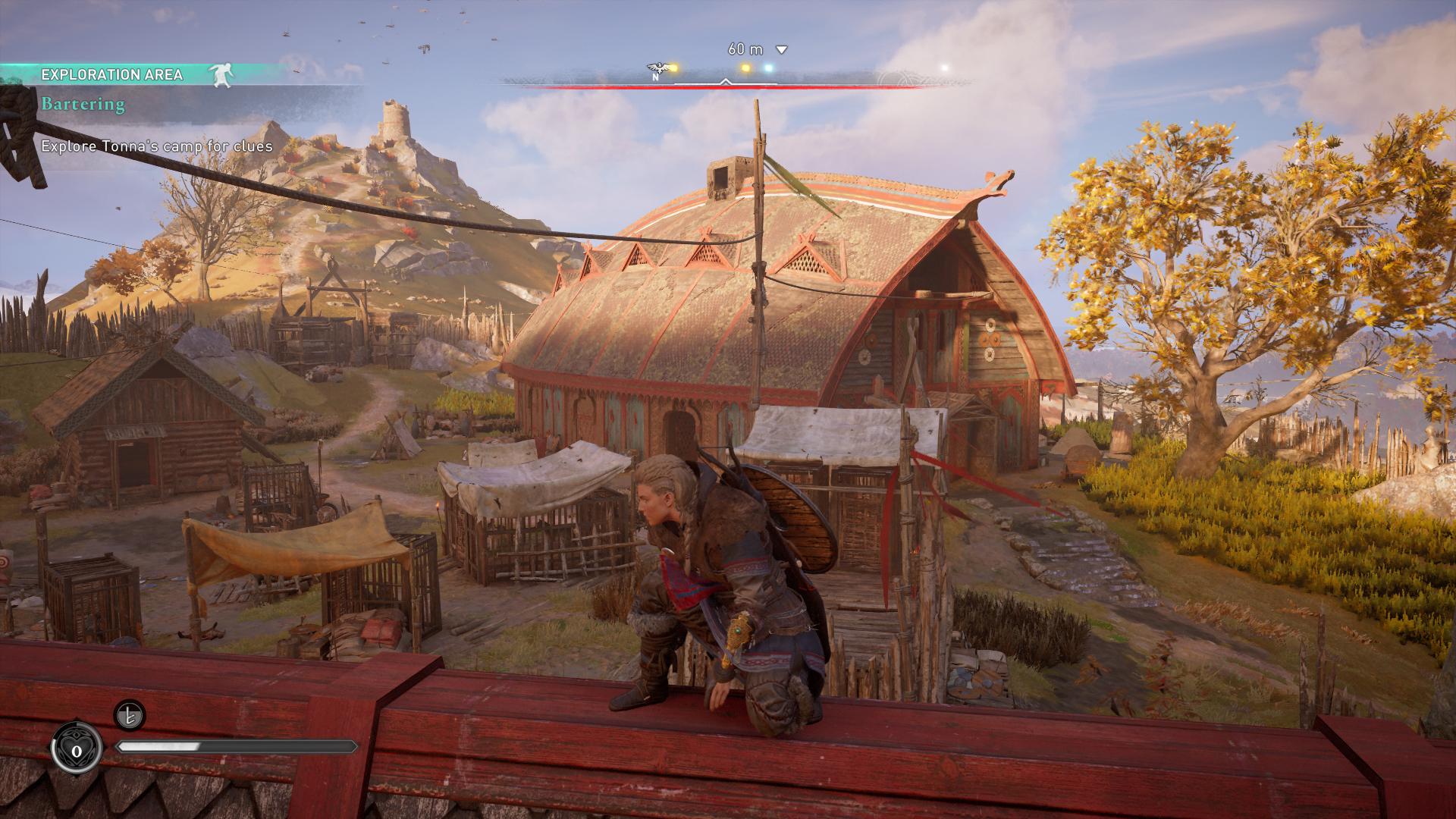 Go around to the left of the outer fence and you will see a gap leading into the stronghold. Crawl through it and crouch in the long grass — you can safely climb the ladder to your left without alerting anyone. Assassinate the guard at the top and climb back down. You will see another guard at a bonfire to your right — headshot him with an arrow. Hug the left wall you came through the whole way to the house in the corner of the camp. Loot it, go out the other door on the right, and hug the spiked fence towards the centre of the camp. You will alert two enemies, but not fully — hide in the small patch of grass right in front of you (crouched, obviously) and assassinate them one by one by luring them to you with whistles. I tried this twice and it worked perfectly both times.

From here you can crouch and walk straight through the middle of the camp. Climb the small ledge immediately to your left after passing through the main arch and go to the left of the two boar cages — there are no guards posted here, so you’ll be completely safe. From here you can go to the right and head into Tonna’s house unseen, or continue walking straight ahead if you’re planning a full infiltration.

For the purpose of simply completing the quest, head into Tonna’s longhouse via the door directly opposite the boar cages. Shoot the trapdoor in the floor and head down into the basement below. The clue is a letter in the chest at the back of the room.

You can climb back up to the ground floor by jumping on one of the beams lining the wall. Climb along these to jump up to the support beam you originally gripped to drop down into the cellar. Head back out the door you came in — if you go out the front door, you’ll alert Tonna. Head back the way you came — around the boar cages and everything — to avoid alerting enemies on your way out. Once you’ve successfully escaped the camp, walk back to Sigurd and the Ragnarsson brothers. You will see your mount along the way, so collect it and ride the rest of the way down if you want to speed things up. It’s not a far journey, though, so this isn’t strictly necessary.

When you reach the quest marker, speak to Sigurd. A cutscene will play where the two of you discuss your plans for what’s next with Ivarr and Ubba. Judging by the letter you found in Tonna’s basement, there are two areas worth checking out: Templebrough Fort and Ledecestre. For the former, you’ll be heading in with Sigurd and Ubba, while the latter is designated to Ivarr. You have to do both quests, but for the purpose of this guide, we’re going to start off with Ivarr’s one.

After the cutscene plays out, the Bartering quest will end. Open up your quest log and set Rumors of Ledecestre as your active quest, which will cause a new quest marker to show up on your minimap.

Read next: Assassin’s Creed Valhalla Review — An Assassin And A Drengr Walk Into A Longhouse