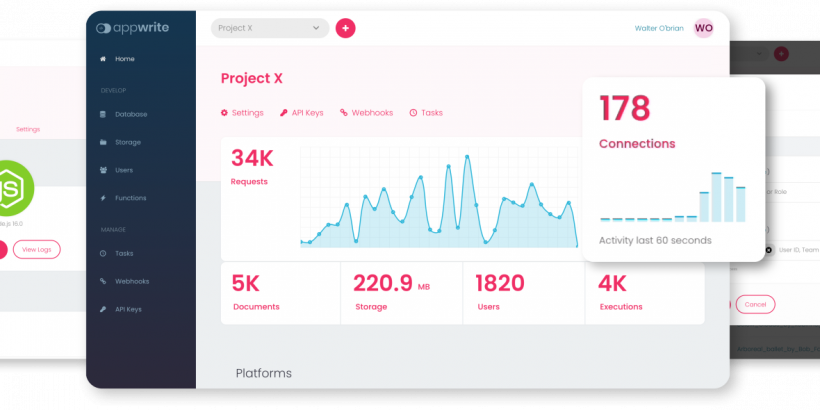 We are excited to bring Transform 2022 back in-person July 19 and virtually July 20 – August 3. Join AI and data leaders for insightful talks and exciting networking opportunities. Learn more about Transform 2022

Appwrite, an open source backend-as-a-service (BaaS) platform that enables companies to forget about infrastructure and focus squarely on the front end, has raised $27 million in a series A round of funding.

Founded in 2019, Appwrite is one of several emerging open source BaaS companies that are setting out to challenge Google’s Firebase, with the likes of Supabase and Nhost both landing investors’ cash in the past twelve months. Appwrite, for its part, announced late last year that it had raised $10 million across two seed rounds, further highlighting the burgeoning BaaS movement.

In its current form, Appwrite is a self-hosted BaaS that gives developers all the APIs they need to power the underlying infrastructure of their applications, and includes user authentication, security, API management, file storage, databases for storing and querying data, privacy, and more.

“Since the very beginning of Appwrite as an open source project, our primary focus has always been on building tools that create value for developers and allow them to innovate,” Appwrite founder and CEO Eldad Fux told VentureBeat. “With Appwrite, developers get all the tools they need to build their products with a consistent experience that turns development into an enjoyable and, most importantly, a fast process.”

The company is also working on a new hosted cloud offering that was touted to launch late last year, and while this has yet to make it to market, it’s not far away from reality. The beta is currently earmarked for launch this coming summer, and the company is already accepting early signups.

“The Appwrite Cloud is our developers’ most anticipated feature, and we’re working extremely hard to make sure they get the best product on the market,” Fux said.

What the cloud product will bring to the table is flexibility. As an open source, self-hosted BaaS product, businesses can deploy wherever they wish and aren’t locked into any specific ecosystem. But some companies don’t want the operational headache that comes with that, and would rather offload the setup resources to Appwrite itself.

“While the Appwrite Cloud will be the easiest way to deploy and scale Appwrite projects in production, we’re still fully committed to bringing developers the best self-hosted solution in the market,” Fux added.

With another $27 million in the bank, the company is well-financed to accelerate development of its cloud product, and double down on its recent growth which has seen it extend its open source community from 40,000 to 150,000 developers since last fall.

The capital will also be used to grow its internal team, and build out the platform with yet-to-be-determined new features and functionalities.

“While it’s still too early to share specific features, we can share that we’ll continue to strive to reduce the friction required for building applications on top of our end-to-end platform by allowing other essential APIs to be part of our stack,” Fux said.

Appwrite’s series A round was led by Tiger Global Management, with participation from Bessemer Venture Partners, Flybridge Capital Partners, Ibex Investors, and Seedcamp.