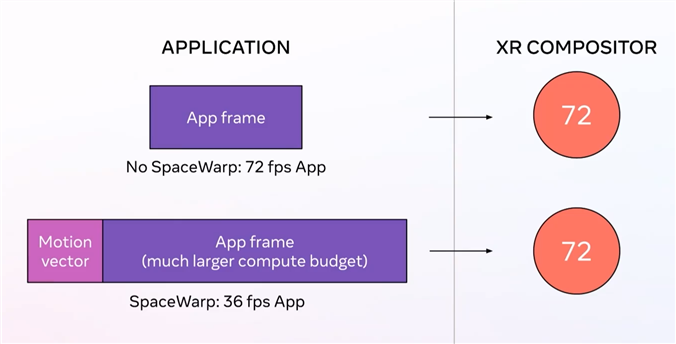 Quest headsets will get a new feature called Application SpaceWarp next week, letting apps run at half framerate by generating every other frame synthetically.

Application SpaceWarp uses the depth buffer and motion vectors – both provided by the game engine – to extrapolate a plausible next frame for every real frame. The depth buffer is a low resolution version of each frame representing the distance of each pixel from your eye instead of color, while the motion vectors represent the movement of pixels from one frame to the next.

That means apps using ASW on Quest 1 will be able to render at 36 FPS, while on Quest 2 developers can choose between 36 FPS, 45 FPS, or 60 FPS since it has multiple refresh rate modes.

Meta says ASW can give apps roughly 70% more power to work with compared to rendering at full framerate. That’s the kind of jump usually seen between hardware generations. It could lead to noticeably higher fidelity graphics or even new games that wouldn’t otherwise be possible on standalone VR.

There are usually two major side effects when using technologies like ASW: latency almost doubles as input is only sampled half as often, and visual artifacts can often be seen as the extrapolation is not perfect.

Meta notes that while the PC-based Oculus Rift’s SpaceWarp estimated the motion vectors itself, Quest’s SpaceWarp will require the game engine to provide the true motion vectors instead. This “significantly” higher quality input, Meta claims, results in “little to no” visible artifacts in most cases. For details on the edge cases where artifacts will be visible, watch the full Connect ASW presentation.

To combat the latency increase, Meta is also releasing Positional TimeWarp next week. While SpaceWarp will be a developer choice, TimeWarp is always enabled on a system level. The current TimeWarp on Quest reduces rotational latency by skewing each finished frame by the angle your head rotated since rendering began. Positional TimeWarp will use the same depth buffer provided for ASW to also reproject each frame in the direction your head moved, reducing translational latency too.

Meta says Application SpaceWarp will be included in the next Oculus SDK release, which should launch November 8. It will require apps to use OpenXR and Vulkan – the legacy Oculus API and OpenGL are not supported. Unity apps will also need to use a Scriptable Render Pipeline like URP – the legacy built-in pipeline isn’t supported.