Bread and circuses. All we need are bread and circuses, to keep the populace complacent. And yet, try as I might, I cannot seem to produce enough bread to meet the demands of the citizens of Ditchwater. Am I not growing enough wheat? Are the millers not working fast enough? Do we need more bakeries? Before I can fix the problem it’s hit the pages of the local newspaper, further stoking resentment. A riot breaks out, protesters clashing in the streets with my tiny police force.

Simultaneously, a thousand miles away and across the ocean, arsonists are attempting to burn down my fledgling colony on La Isla. Chances are they’re related to the same shadowy group that murdered my father and stole my inheritance—but I can’t stop them, because I don’t even have enough bricks to build a police station here.

Everything’s going wrong at once, and it’s all my fault. That’s Anno 1800.

Times are a changin’

After two Anno experiments set in the far-flung future, the series returns to its roots as a historical city-builder-slash-strategy game with Anno 1800. As longtime fans can no doubt surmise from the title, the game is set in the 1800s, the period of the industrial revolution, with distinctly Victorian Era architecture and a focus on factory labor. 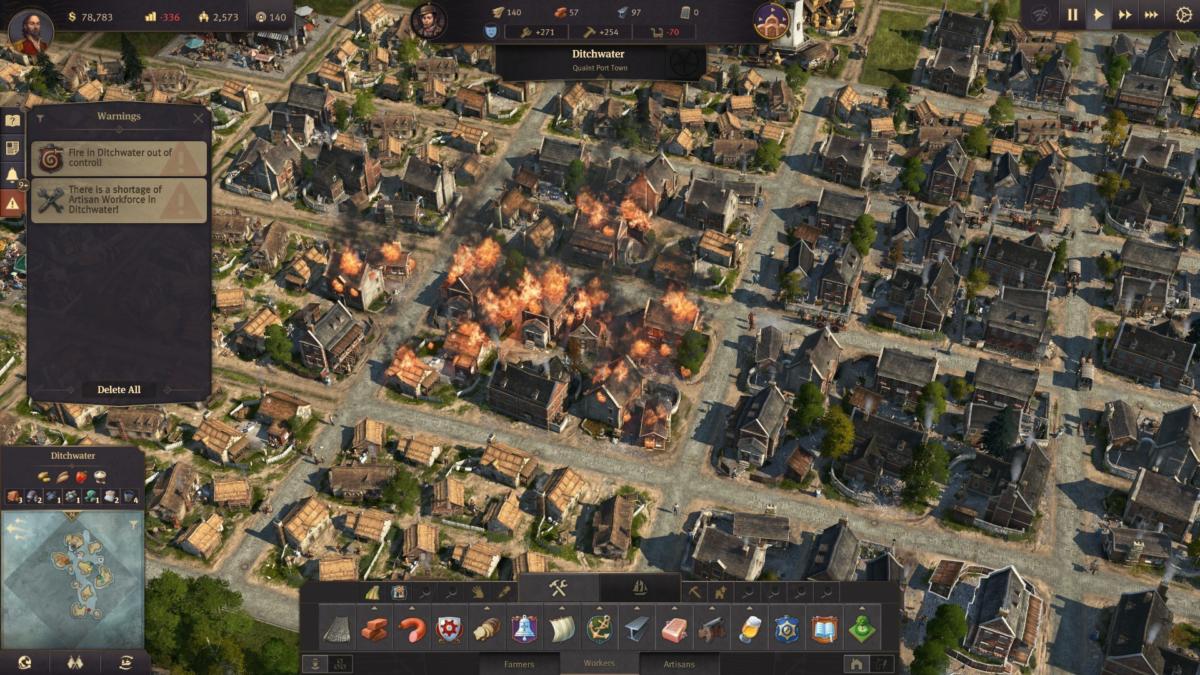 And if you like Anno, it still does the Anno thing pretty damn well—which is to say, it’s a game about optimization. Sure, it looks like a city builder, but it’s more complicated than your average SimCity or Cities: Skylines. Money isn’t your only constraint, or even your primary constraint. Instead you are balancing a bunch of resources against the needs of your citizens, or at least attempting to do so.

Now you have farmers—but the work doesn’t stop there. The farmers have needs as well, so you build a dock for fishing boats, create a potato farm and a distillery, create pens for sheep and a factory to turn the wool into yarn and then rudimentary clothes. All of these require labor, which means more houses, which means more farmers, which means more potato farms and sheep pens and factories, and so on. 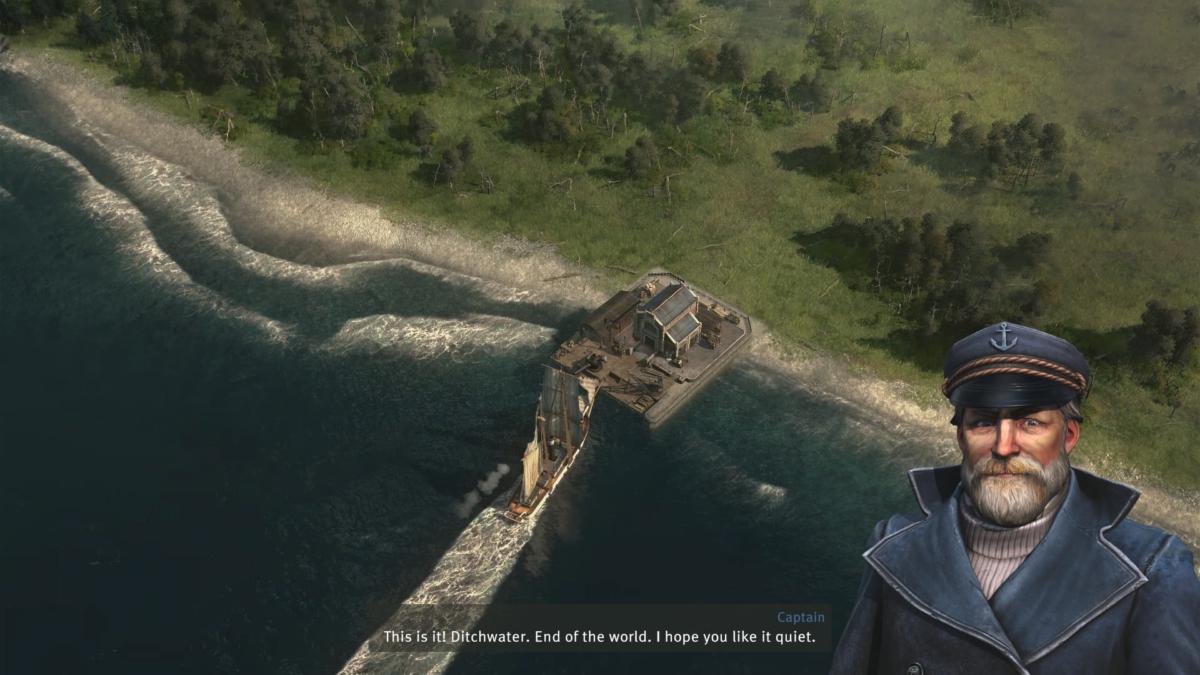 This is the Anno loop, and it only gets more complicated from there. Eventually you’ll turn some of those farmers into workers, and then into artisans, each with different necessities you need to supply—canned food, sewing machines, sausages, and so on. And then when it seems like it couldn’t possibly get more complicated, Anno 1800 introduces the New World, a second city that runs parallel to the first and turns out products like rum and coffee that your laborers in the Old World want to purchase. Get ready to set up some trade routes.

It’ll be very familiar to Anno veterans, especially those who were around the last time Anno was set in a historical period. Many of these ideas are throwbacks to the colonial Anno 1701 and the like, just moved forward to the Victorian Era. The main differences are some quality-of-life changes made in the future-era Annos that now map onto 1800, plus one key new “blueprinting” feature that I’m really fond of.

Most important, in my opinion, is the Move feature. This was introduced in Anno 2205, and allows you to easily reorganize your cities by picking up any structure and moving it to a new area. On Anno’s standard difficulty you can do this at any moment and to any structure, for free. Realistic? No, but it’s a welcome addition that helps solve the standard city-builder problem where starting out you build a sawmill or a wheat farm in what eventually becomes the center of your town. Now you just pick that sawmill up and move it to the outskirts again, where it belongs. 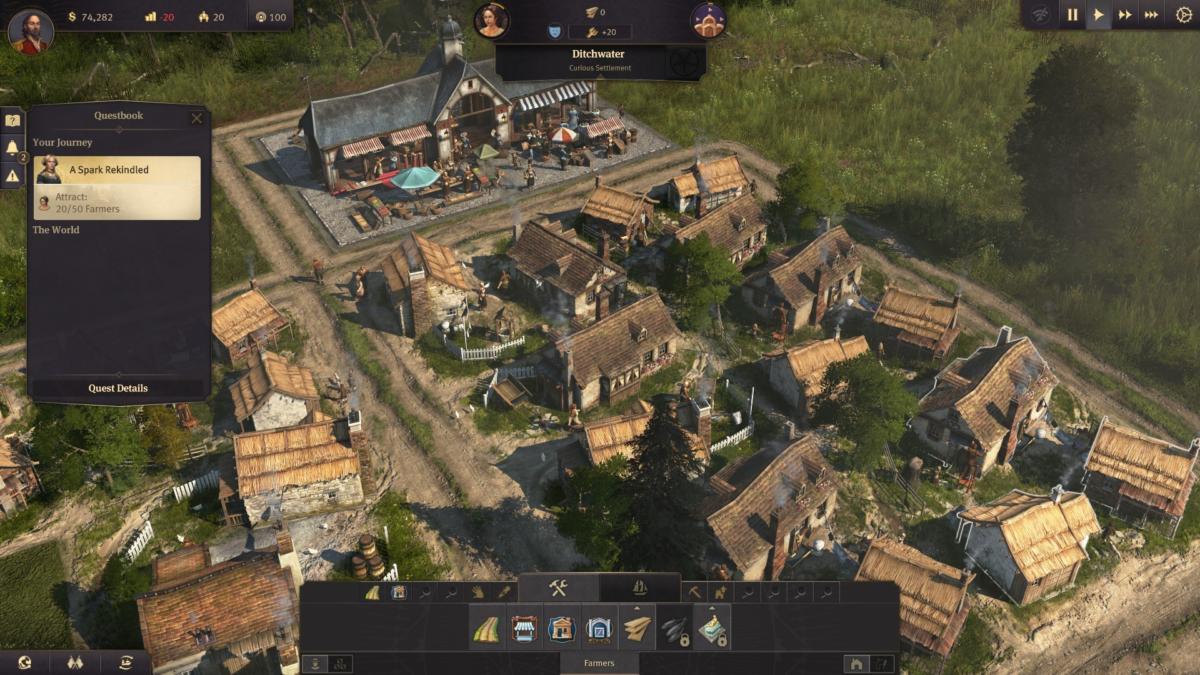 Anno 1800 also adds another feature to help budding urban planners: Blueprint Mode. Say you know you want to reserve a plot for your Town Hall but your factories haven’t produced enough windows yet, you can now place a silhouette of the Town Hall onto the spot in question. These blueprints won’t function until you build them properly, but it’s a nice touch for people who like to neatly lay out their cities.

Unfortunately, Anno 1800 feels like a step back in some regards from Anno 2205. I really loved that the three environments in 2205 felt varied on a minute-to-minute level. The temperate zones played like a standard city builder, but the arctic areas forced you to cluster houses around factories for heat, and the late-game lunar colonies were limited by costly life-support domes.

Anno 1800 doesn’t have that luxury, limited as it is by the scope of the Victorian Era. Aside from the unique resources, building in either zone feels interchangeable. Islands tend to be smaller in the New World, but you’re not really forced to reckon with tropical storms or anything that might fundamentally change how you play a city builder. I think there might be a slight tendency towards more diseases in the New World, but this is easily solved by the fact you unlock hospitals earlier than your Old World counterparts. 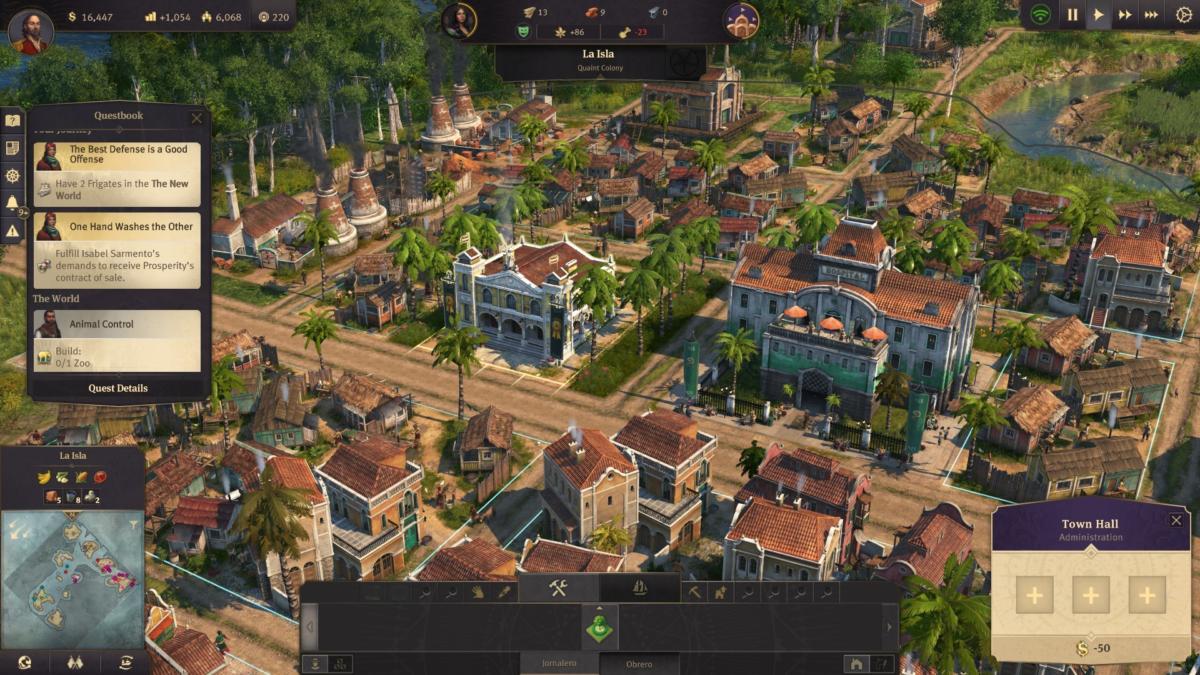 And the hardest part of Anno is still figuring out what the hell is going wrong. I complained about the interface in Anno 2205, which pared down the old text-heavy menus into something more pleasing to the eye. 1800 is a weird hybrid though, in that the menus are more cluttered than they were in 2205 but still don’t tell the player enough.

Try figuring out why you can’t upgrade your old farmer hovels into gleaming worker apartments, for instance. To do so you’ll need to click on one of the farmer residences and see what you’re short on—let’s say worker clothes. Then you’ll need to figure out which stage of clothing production is the bottleneck. Do you not have enough sheep farms? Not enough yarn? Or just not enough clothing factories?

And there’s not really an elegant way to surface this information either. You can pore over your warehouse’s storage list to see if there’s an obvious shortfall in one or another product, but I often found it easier to find the factories in question and check step-by-step whether each process had access to enough raw materials. “Easier.” The problem’s compounded any time trade comes into the equation, trying to figure out whether you’re out of cotton or hops or what-have-you because nobody can sell you more or if there’s a boat on the way laden with the resources you need. 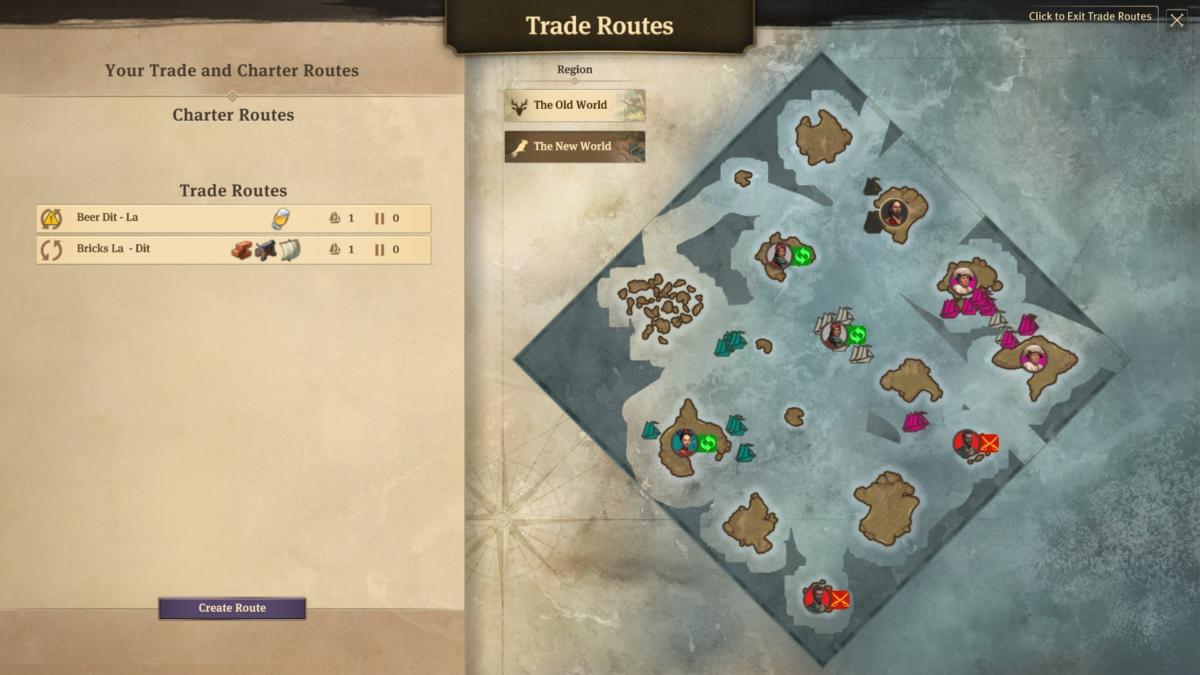 It just feels cumbersome at times. Anno is fundamentally a series about micromanaging. Reviewing 2205, I wrote that Anno “often feels less like [building a] real city and more like machinery.” It’s all about managing pipelines, spinning two-dozen plates at once and all those plates have additional plates balanced on top. And if Anno has a flaw, it’s that it’s terrible at telling you when one of the plates starts to wobble.

Okay, one more flaw: It’s a game about colonialism, but it’s unwilling to engage with what that historically entailed. I’m not really sure what I expect a city builder to do in this regard, but it’s one of the thornier parts of Anno 1800 that the series avoided with the future-oriented 2070 and 2205. The history of colonialism in South America is brutal, exploiting both the region’s natural resources and labor pool. Anno has you building sugar plantations, stripping the land of gold and oil, et cetera, and doesn’t ever ask the player to think twice about the ramifications.

It’s hardly the first long-running series to encounter this issue. Civilization and Europa Universalis, for example, have run afoul of the same problem in recent years as developers and players both try to align the modern (mostly negative) connotations of colonialism with games predicated on colonialist ideas. I found myself thinking about it a lot playing Anno 1800 though, watching my sombrero-clad workers laboring on the sugarcane plantation without seemingly a care in the world. 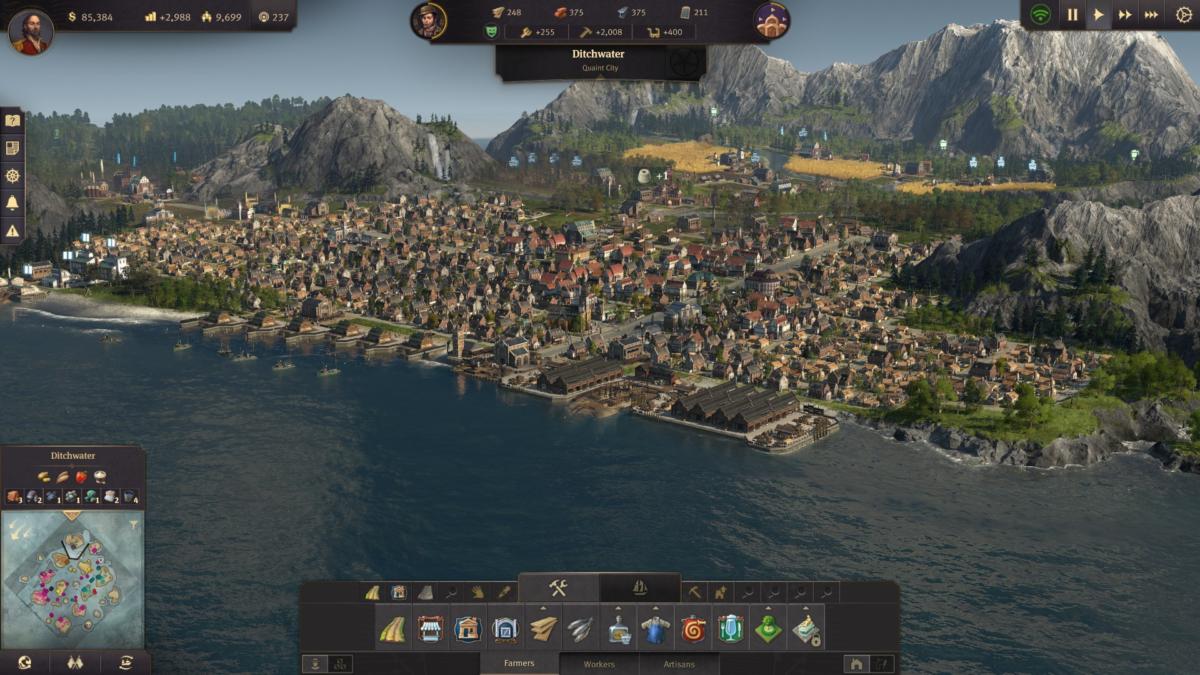 To its credit, Anno 1800 does try to grapple with industrialization’s impact on the populace, with every factory you add diminishing your city’s attractiveness rating. This system’s pretty thin though, with penalties applied to entire islands instead of (as in Cities: Skylines) affecting the immediate area around an industrial center. There also aren’t, from what I’ve seen, any impacts on the land or the people themselves. You can place a wheat field next to a smoke-spewing factory with no negative impact, and none of my citizens ever came down with respiratory problems or anything despite living in the shadow of the smokestacks.

That said, this is the most impressed I’ve been with an Anno game on a technical level. The buildings are incredibly detailed, down to signs and moving bits of machinery. The streets bustle with people. Sheep wander around their pens. Plantain trees wave in the wind. Your island is only one of many, as the map is populated by a bunch of AI island-cities as well, some of which (in the campaign at least) are vastly larger than your own. 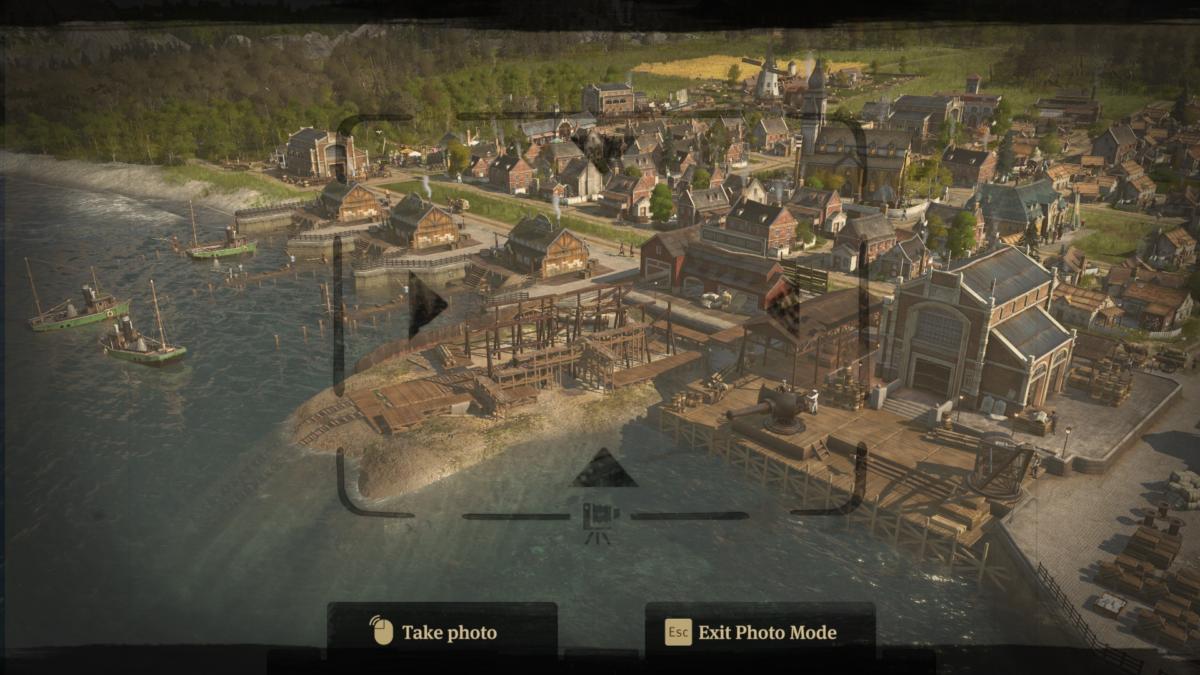 And then there’s the New World/Old World dynamic. Both run at the same time and can be switched between on-the-fly—and immediately. In 2205 I complained that switching zones required a 20-second load each time, but in Anno 1800 you can toggle Old World to New World and back again with zero load screens.

It’s incredible, really. I’m running on an Intel Core i7-5820K and an Nvidia GeForce GTX 1080 Ti and even so I’ve seen a bit of slowdown, but honestly with this much happening at once I’m amazed it runs at all.

As always, Anno 1800 is flawed but strangely engrossing. I’ve spent 15 or 20 hours constructing my little ocean-spanning empire now, and may well spend 15 or 20 more fleshing it out. Much as I miss the additional challenges posed by the environments in 2205, there’s still a satisfying loop to Anno 1800 that makes it one of the more unique city-builders, balancing two-dozen different resources, trade, diplomacy, and a rudimentary navy all at the same time.

I’d like to see Blue Byte improve the framework next time though, the structure within which that loop is contained. The menus need a complete overhaul for starters—even the non-game menus. It took me 10-plus hours to find out you can rotate buildings by clicking the middle mouse button because it’s not even listed in the settings menu. It’s only detailed in a load screen tip, and the only time you see load screens is on initial startup.

Bigger picture, I’d like to see a more daring setting next time as well. Anno 1800 returns the series to its roots after two games away, which is fine, but it does feel like playing it safe after the creatively daring 2070 and 2205. It’d be great to see another departure soon—say, an Anno starring the Phoenicians or another ancient trade empire.

But Anno 1800 will do for now. It’s nothing we haven’t seen before, and it’s a bit rough around the edges, but Anno’s still the most fun you can have with a glorified spreadsheet. Just be sure to build lots of bakeries.