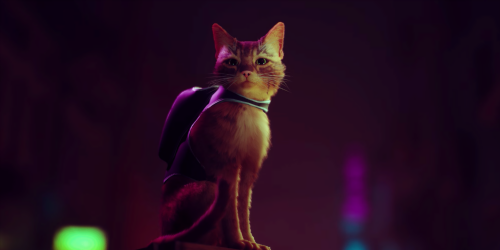 Cat lovers rejoice! Indie game Stray is still on track for a 2022 release. This news was confirmed by developer Annapurna Interactive on Wednesday, just ahead of Sony’s State of Play broadcast.

Leading up to this week’s State of Play, social media was buzzing with what games could possibly be focused on in the PlayStation broadcast. One name that was tossed about was Annapurna’s cat sim, Stray. The title was revealed back during Sony’s PlayStation 5 reveal stream and was expected sometime last year. However, a PlayStation Blog post last summer announced that the game would be pushed to an early 2022 release. Since then, news on the feline adventure game has been sparse.

With the “early” part of “early 2022” coming to a rapid close, many believed that Stray would take the spotlight at the State of Play event. However, Annapurna quickly confirmed that the game would not be making an appearance but is still on track for a 2022 release. A few hours before the broadcast, the developer tweeted out, “for those asking about a Stray update, it won’t be a State of Purr today…it’s still coming this year, though!”. While the studio didn’t offer an official release date, it is good to know that the cat sim will still be making an appearance this year.

Stray is a detour from the traditional adventure-puzzle game. For starters, players will inhabit the body of a cat on an alien planet filled with robotic inhabitants and other creatures. While not a lot is known about what awaits the four-legged protagonist, a gameplay trailer touts a focus on puzzles and platforming. The cat is seen jumping between obstacles and adorably picking up items to solve a puzzle. Of course, it is not all puzzle work as some intense action scenes will really put those four paws to work.

What makes Stray stand out is the attention to detail that Annapurna has put on making the cat feel as real as possible. This includes adding in cat-like behavior like drinking milk, rubbing against a character’s legs, and scratching up furniture. You know, all the things that make cats so darn lovable.