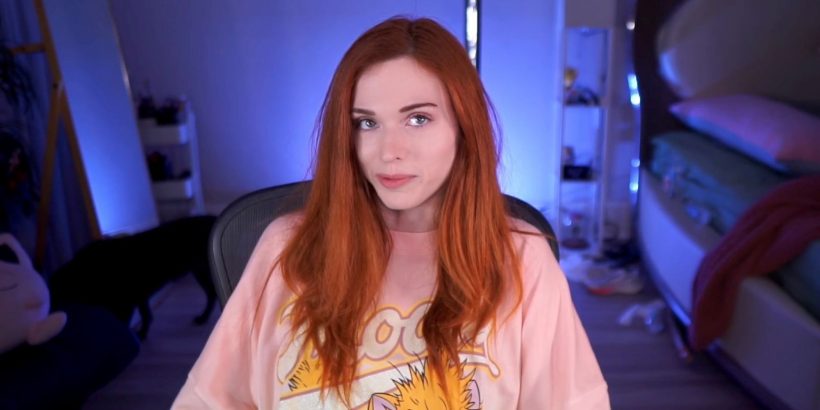 [This piece contains links to resources for anyone who might be experiencing emotional abuse, or thinks they might be, at the end of the article]

Amouranth has understandably been on an emotional ride following a stream on Sunday where she recorded a phone conversation with her formerly secret husband, showing his abusive behaviour and which suggested he controls her finances. Now, in her first stream since those events she's updated fans on her situation, saying that she's "happy that I'm free".

During her Twitch stream, Amouranth, who's real name is Kaitlyn Siragusa, got things off her chest as she updated fans on the situation (via Kotaku). She was appreciative of the outpouring of support and concern that she has received lately, with offers of legal assistance for example, and expressed her gratitude multiple times.

"As for the husband situation, as some of you probably saw the other night he called me during a stream and I disappeared for like two hours. Then I finally unmuted about an hour and a half into the call, and I apologise if that was hard to watch for people, I didn't really know what else to do…" she said in the below video (stream starts around 33 minutes in – content warning for mentions of abuse).

She explained that it was the first time her husband had heard himself on a recording. Although he'd been previously recorded during other abusive calls, he had not before agreed to listen to himself she revealed. "I think when he heard himself on that call it really sunk in how much of an asshole he really is," she said, and laughed. "It's like, you never even realised, idiot?"

She revealed that her husband is now away "getting help" and "as of today I have access to all my accounts and finances again". The streamer said she is also seeking legal and emotional counsel.

"I didn't think that many people would give a shit, to be honest, it's kind of crazy," she said, referring to the outpouring of support she's received since Sunday. "Even haters are like 'damn, I fuckin' hate Amouranth, but you know what, I hope she's ok', that's so nice," she added.

Those who believe she used the situation for personal gain and clout include her "former cameraman" she said on the hour-long stream, as she presumably fired them, while over TwitchCon (October 7 to 9) she said that her husband had tried to "create a scene" and that this led to increased strain between the couple, which ultimately led to the abusive call on Sunday evening.

Amouranth explained that the abuse had been going on for years, but that it would come in cycles. However, she said she's previously gone to to the police to explain her situation but that they wouldn't take any action unless she had suffered physical harm.

But following Sunday's events Amouranth is now looking forward to having friends again, getting more sleep, watching TV, and being able to "wear some clothes" as she said she's beginning a "new chapter" in her career. Before that however she's going to "take some time to process things, spend some time with my animals, feel like a human again".

Help: If you are feeling like you could be in a similar situation of an emotionally abusive relationship, there are various ways to get help. Factors of domestic abuse can include the abuser cutting off access to family and friends, and intentionally isolating their partner; bullying, controlling, and threatening behaviour; taking control of your finances; monitoring or limiting access to technology such as mobile phones; and physical and sexual abuse, but official advice says it's important to recognise that domestic abuse is not always physical.

Crisis Text Line has further information on emotional abuse, as well as a phone number you can text. Their service is available to US, UK, and Ireland residents.

Those in the US can also use the National Domestic Violence Hotline, which offers 24/7 confidential and anonymous help by phone, text, or online chat.

Those in the UK can also use the Domestic and Sexual Abuse Helpline, which has a phone contact as well as email.

If you feel you could be in immediate danger and are coming under physical harm, it is recommended to contact emergency services ASAP.