According to a new report, Among Us downloads increased by a massive 661% between the months of July and August. That astronomical growth continued throughout September, with the game now sitting at well over 100 million installs.

Considering Among Us launched in 2018, the recent numbers it has been putting up are astounding. In fact, according to the report, “During the one-and-a-half-month period from the beginning of August to mid-September, the number of installs accounted for 70% of the game’s lifetime downloads.”

This massive influx of players was driven primarily by a few popular Twitch streamers playing the obscure game, although Sodapoppin seems to have been the most popular. In fact, Among Us viewership increased by more than 3,200% – 3,200% – between the months of June and July. Twitch viewership jumped from 171 average viewers to 5,600. When it launched back in 2018, it averaged around 30 concurrent players. Now, however, it recently recorded a peak of 3.8 million.

Most players are based in the United States, with nearly 24% of all installs and 20.5 million players. Brazil took the second-place spot at 19%, followed by Mexico with 8%. Not surprisingly, Americans have spent the most money on Among Us, with over $1.6 million in sales by the middle of September, accounting for almost half of the game’s revenue. 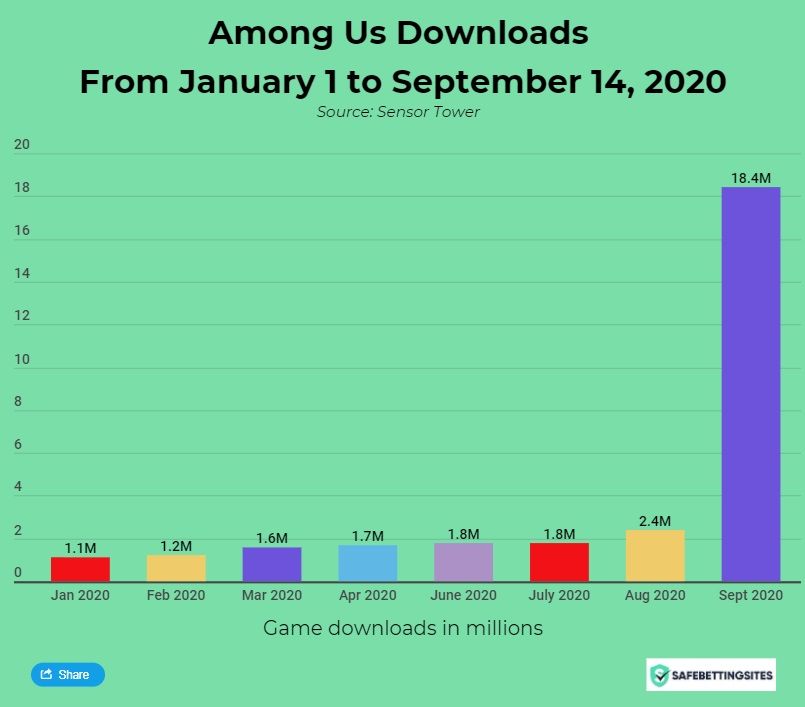 Among Us became so popular over the past few months that back in August a sequel was announced by the developer. It has since backtracked, and stated that it will instead focus on bringing new content to Among Us and has abandoned plans for a sequel – at least for now.

Available on PC, iOS, and Android, Among Us is a multiplayer game about “teamwork and betrayal.” The game takes place on a spaceship with 4-10 players, all of whom are busy keeping the ship functioning as normal. However, one player in each round is designated as the Imposter and is tasked with sabotaging the crew’s efforts and picking them off one by one. It’s up to the crew to detect the Imposter and eject them from the ship. It’s a hilariously fun game, and wholeheartedly deserves all the attention it’s getting.

Among Us is now available for free on the App Store, Google Play, and Steam.