She may be the princess of the Gerudo, but like Zelda, Riju isn’t just a figurehead leader. Wielding not only the Thunder Helm but her trusted Sand Seal, Patricia, Rjiu is one of the harder characters in Hyrule Warriors: Age of Calamity to get a handle on, but once it all begins to click, she is a force of nature that tears through Guardians like paper.

Unlike Yunobo, Teba, and Sidon, who all play like slight variations of their predecessors, Riju is entirely unique and doesn’t play like any other character in either Age of Calamity or the original Hyrule Warriors. This unique quality means she is also often left by the wayside in favor of easier to grasp characters. 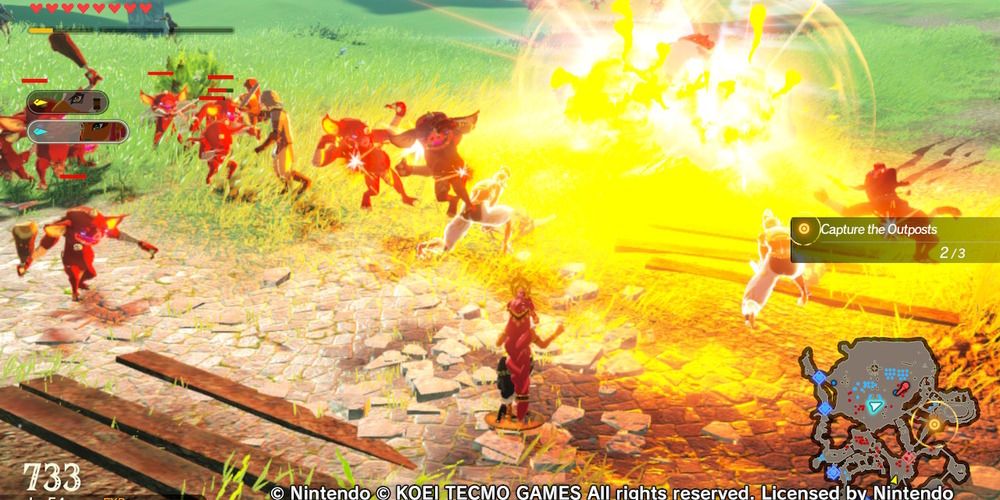 Unlike the rest of the Age of Calamity cast, Riju’s playstyle revolves entirely around movement and keeping momentum while attacking on the fly. This makes playing as Riju feel more like Sunset Overdrive than Hyrule Warriors, but she’s more than up for the task of taking down Calamity Ganon.

This does mean, however, that Riju struggles to focus on single target enemies from time to time and is far more efficient when it comes to taking down hordes rather than a Moblin or Hinox. 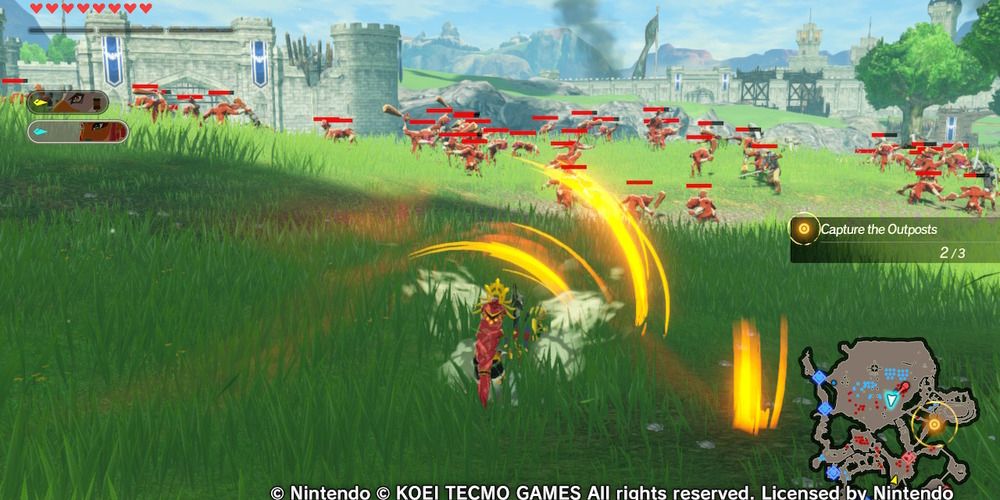 When using Riju’s strong attack, Patricia will launch herself forward and begin a charge attack that continues to do damage for quite a distance. This is a good way to start sprinting if you need to get somewhere fast.

While on the move, Riju will instead swing around Patricia and attack in a wide circle around her, dealing decent damage while also moving her model around enough to avoid most incoming damage. 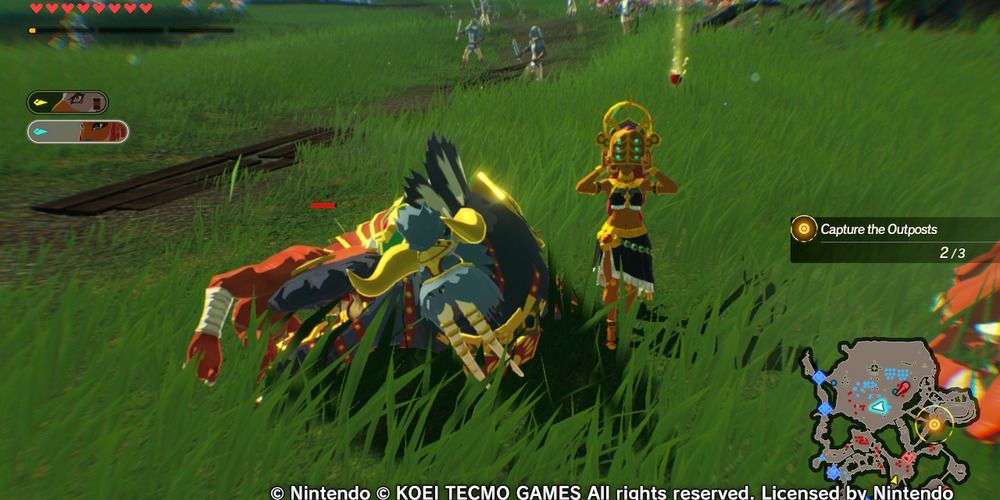 Although Riju differs substantially from Urbosa, their special attack is almost identical. When activated, Riju will place the oversized Thunder Helm on her head before summoning a dome of electricity around her that damages everything inside.

Like Urbosa, this is quite a large AOE attack and can very easily catch multiple large enemies inside of its damage range. Unlike Urbosa’s special attack, however, there is no targeted lightning bolt to deal the bulk of the damage to a specific target. 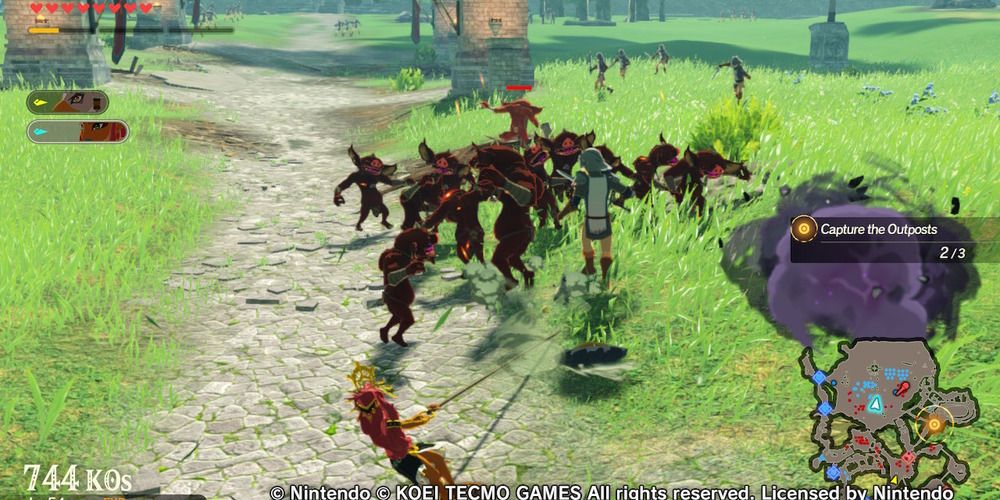 Riju’s basic combo string is somewhat difficult to pull off since it has the tendency to stop after the first attack and not proceed to the second if your timing is even a little bit off. However, when you can get it to work in your favor, Riju’s forward momentum is greater even than Mipha’s, with her traveling a substantial distance in the process.

While Riju is on the move, her combo is slightly altered as Patricia will leap into the air to allow for aerial combos rather than staying on the ground. This attack launches her very high into the air and well out of reach of most enemies, making it a good way to avoid Lynel attacks in particular. 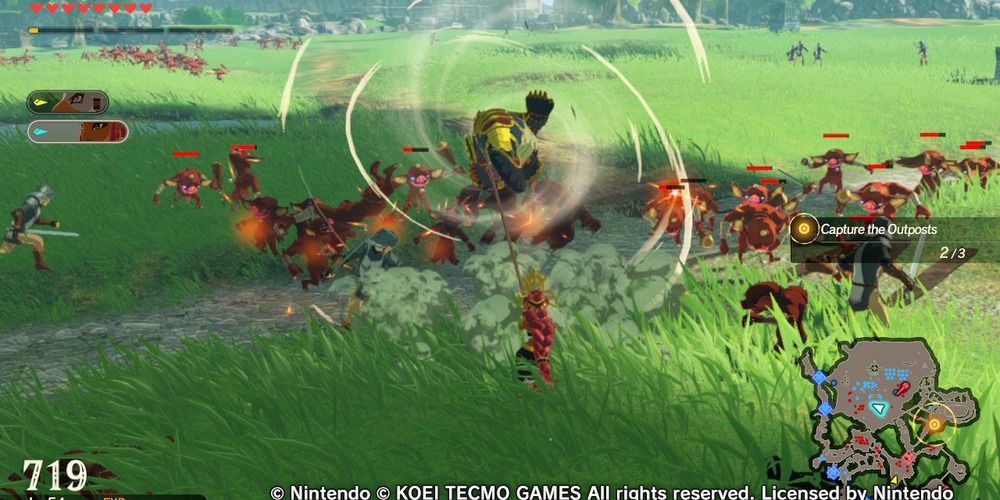 Because of how wildly Riju moves when she attacks, it can be very difficult to know the timing for executing her strong attack combos. However, with a little practice in the Meditation Room, you should be able to figure it out fairly quickly. The bulk of her strong combos are based around AOE damage, with her third combo summoning lightning strikes, her fourth summoning a tornado, while her fifth summons multiple Sand Seal riders to attack alongside her.

Riju’s first and second combos are also decent and focus on hitting a single enemy in front of her or launching her into the air respectfully, though their use is a little more niche. 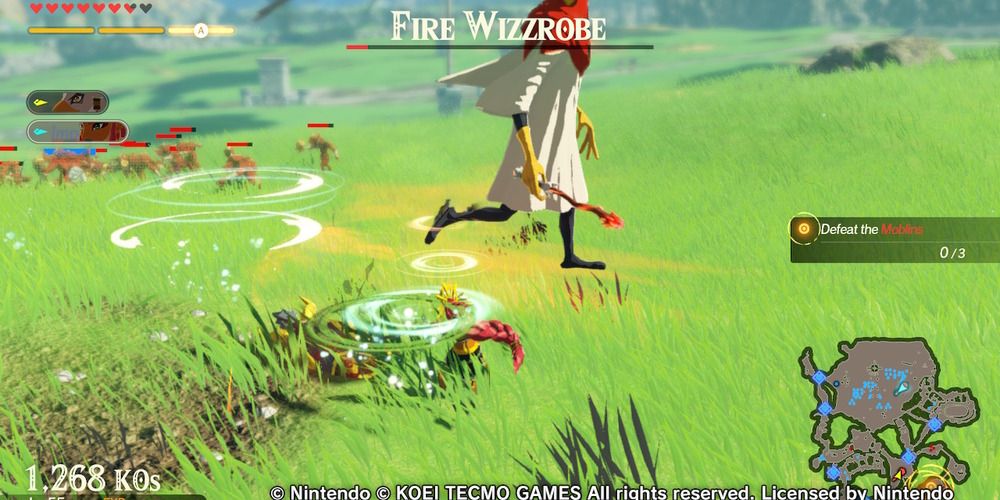 Unlike the majority of characters in Age of Calamity, Riju’s best weak point drainer is her sprinting strong attack, where she spins around Patricia constantly dealing damage. That said, this attack takes some getting used to against single targets and you can very often move outside of her hit range if you aren’t careful.

Riju’s third combo is similarly good, but it also has the same downside of being difficult to control. 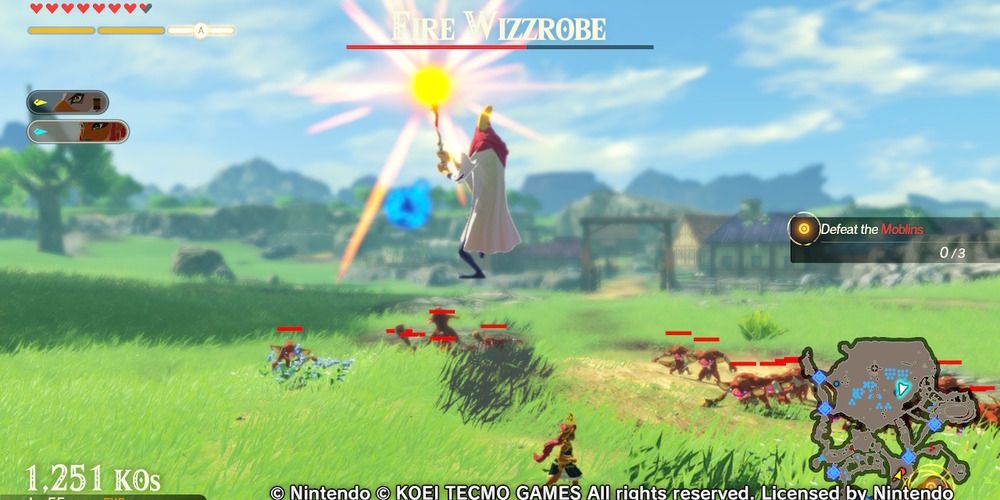 Like every other aspect of Riju, her Sheikah Runes are rather unique compared to other characters and don’t often follow the same style of play as most. Riju’s bomb rune, in particular, is entirely different, as she throws the bomb to the ground and uses it to launch herself into the air instead of directly hitting an enemy.

Riju’s Stasis rune is surprisingly good for having its own attack string attached, though this can also be dodged out of if necessary. Her Cryonis rune is similar to Link’s, summoning a large block of ice, but Riju can also follow this up by getting Patricia to push it along the ground to deal damage to anything in front of her. Riju’s Magnesis rune is probably the least useful, though it does have the added bonus of dealing lightning damage that can be exploited in water. 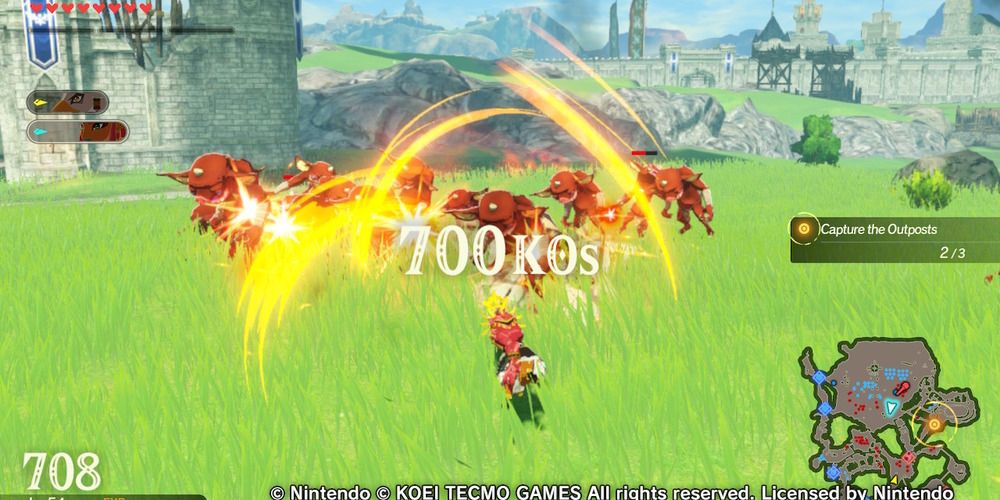 Riju, like many other characters who are agile on the battlefield, doesn’t always need to avoid attacks by dodging or blocking, since her basic combo and strong attack combos move her around enough to avoid damage in most instances. Her sprinting strong attack, in particular, allows her to stay on the offensive without needing to avoid damage unless it is an AOE attack.

Where Riju benefits from blocking, however, is in the fact she is one of the few characters who uses a shield, making her able to reflect Guardian beams alongside Link and Urbosa. 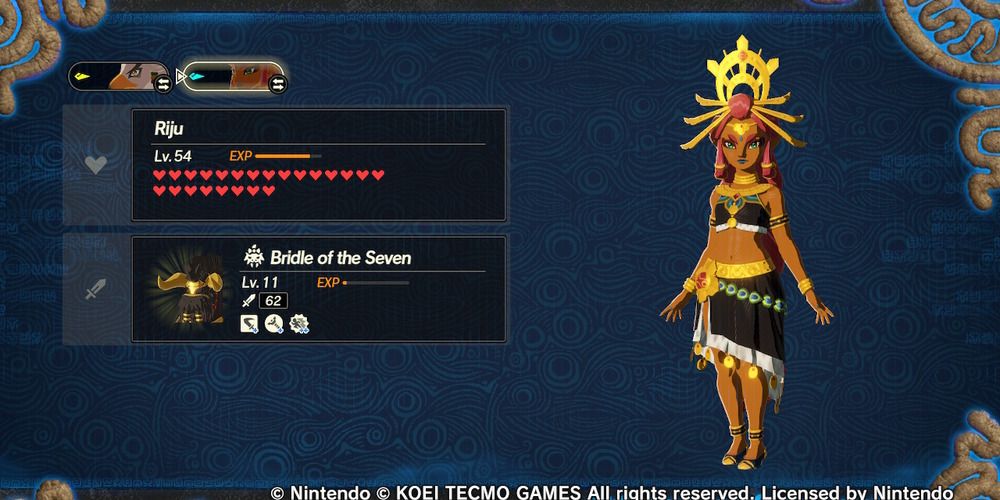 Similar to Sidon and Teba, the best seals that Riju can use are the Strong Attack Damage increase. More often than not, the best way to use Riju is by abusing her sprinting strong attack.

Another seal that Riju also benefits from is the Midair Damage increases, as many of her combos also launch her into the air for aerial combos. 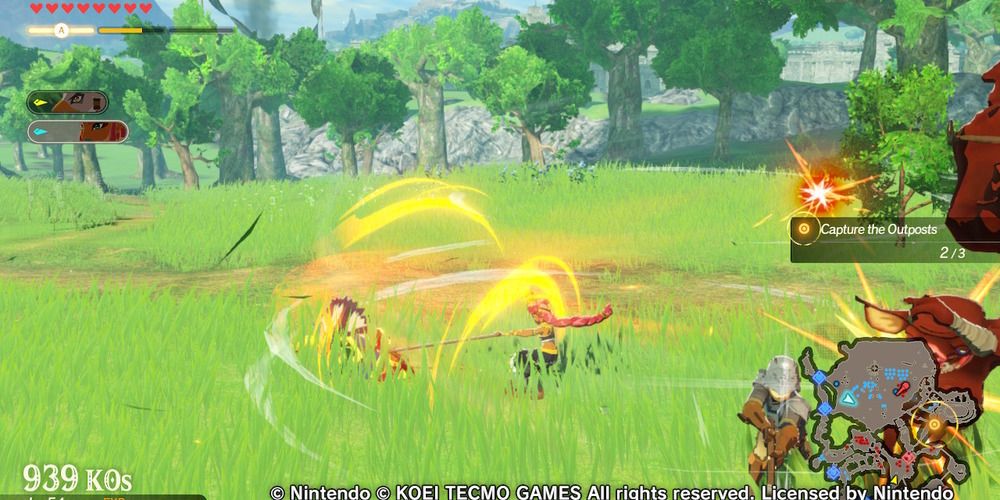 Riju’s unique action is fairly straightforward, as it causes Patricia to begin a charge attack that also drastically improves the character’s movement speed while it is active. For the most part, this attack is almost entirely useless against larger enemies and bosses, since you are more likely to miss your target than actually hit anything, but it is very useful in moving away from bosses or moving around the battlefield under a time constraint.

Next: Age Of Calamity: Pro Tips For Playing As Ganon 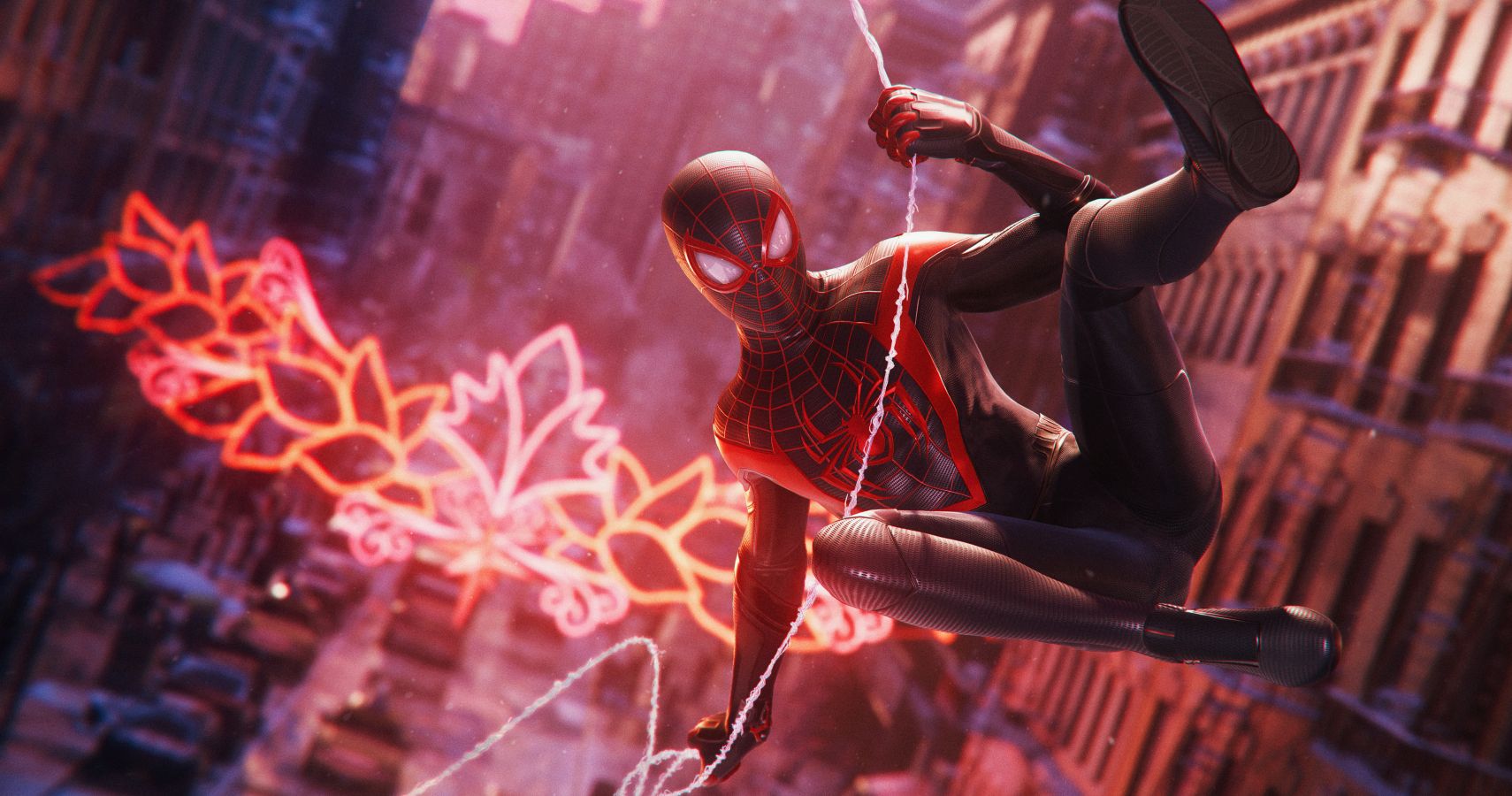