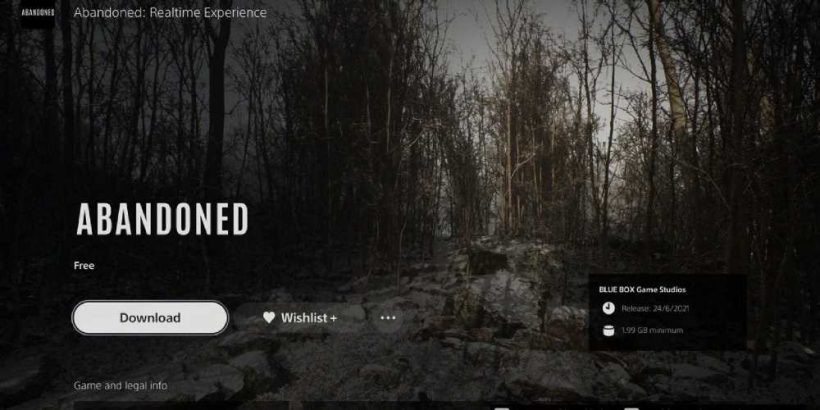 Remember that elusive gaming mystery from last year? It already feels like a lifetime ago. An indie developer started teasing a new horror game, Abandoned, which many believed to be an incognito Silent Hill. It wasn't. In fact, people thought it was Kojima in a hat and moustache.

The actual developer had to come out and make a video proving he wasn't Kojima after being harassed. But there was still the mystery of whether Abandoned was even real, especially given the studios' track record of bait and switch releases and 'abandoned' games. This one has taken a similar turn with nearly all tweets mentioning Abandoned having been deleted.

Three months ago, developer Blue Box Studios promised an imminent demo, but nothing came. There was also a 6GB trailer app that fans had to download. Again, nothing came of it. A lot of promises were made, a lot of dates given, but nothing concrete was ever released. Abandoned appears to have been, in essence, an ARG – not a game. The online mystery is what Abandoned ended up being.

Many have been quick to point out Blue Box Studios' track record which is very similar to this, making Abandoned almost feel like a tongue-in-cheek nod to its history. In 2015, it announced another horror game called Rewind, but the teaser was delayed, the Kickstarter cancelled, and game development put on halt. Then a new game was announced and the same thing happened. And again in 2017. Then again in 2018.

Eventually, in 2020, Blue Box did release a horror game called The Haunting on Steam for Early Access but it had 100 percent negative reviews and so the studio pulled the 'buy' option.

A big update was promised and nothing happened. Development ended. Jump ahead to 2021, and we had the announcement of Abandoned which has now, much like all the others, been abandoned.

As pointed out by Lance McDonald, Abandoned got marketing this time around from PlayStation as all indie games are given an opportunity, hence why, despite the studios' track record, it got put into the spotlight. But that's all it was – marketing hype.