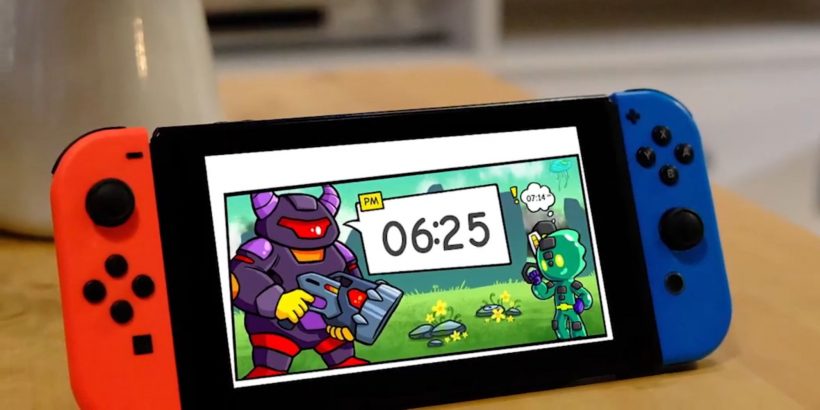 RedDeerGames, the indie game developer that brought us AAA Clock for the Nintendo Switch, has announced a sequel to its best-selling app. AAA Clock 2 is a clock, but this time, it’s also a game.

To be fair to RedDeerGames, AAA Clock was also a game, but it was described as a secret game that you had to figure out how to unlock. It was also not much of a game as the monochromatic graphics mirrored that of the original GameBoy. It did tell time, and it also had a Squid Game tie-in, but that was about it.

A year later, RedDeer has returned with AAA Clock 2. It still has a fun clock mode that is entirely unnecessary as the Switch already has a functioning clock (although you still have to pay $10 for a calculator), but now it also has a real game attached to it too.

It looks like AAA Clock 2 might have started out with a different title. RedDeer's site reveals a game called "Jelly & Vulca," a side-scrolling platform shooter like Contra and Metal Slug. The game features Jelly, a shape-shifting alien with a blaster, and Vulca, an armored alien with an even bigger gun. The two of them go on adventures throughout the Six Worlds seeking to restore harmony to the galaxy and blow up a bunch of weird aliens.

Described as a "continuation" of the secret game in AAA Block, AAA Clock 2 now has color, a selection of different weapons and power-ups, as well as a distinctive comic book style. Jelly and Vulca can swap places at the press of a button, and both seem to have their own special abilities. Jelly's is designated with some arrows while Vulca's icon is an explosion. We'll let you decide what that might mean.

RedDeer's site mentions six total heroes along with Jelly and Vulca, although the other four don't appear in today's trailer. You'll have to play the game to find out more. AAA Clock 2 arrives on November 4 only for the Nintendo Switch.