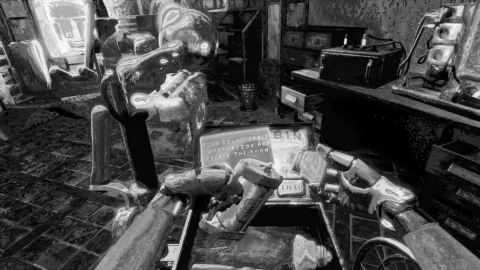 Developer VR Bros just revealed the first in a new series of developer diaries for the upcoming PC VR title. In this installment, the team looks at some of the VR-centric design, including the decision to place players in a wheelchair. For the first time we properly see the movement system in-action and it works much like you’d expect; grabbing both wheels and moving your arms will take you forwards and backwards, and you use one wheel at a time to steer.

It looks pretty immersive, though VR Bros has also implemented teleport and virtual joystick locomotion for those that prefer it, too. Your wheelchair is also fitted with a physical inventory system that has limited space to hold items. Think Resident Evil 4’s inventory management, just being played out in front of you.

Clearly VR Bros is putting VR front and center of A Wake Inn. The game sees players cast as a mannequin that explores an abandoned hotel littered with enemies and puzzles. You’ll need to find out how you got there, and how to escape in a full VR adventure.

The game’s due for release in Q1 of this year, so expect a release date within the coming weeks. It’s coming to SteamVR, though there’s no word yet on possible Quest or SteamVR versions. Will you be checking out A Wake Inn? Let us know in the comments below!