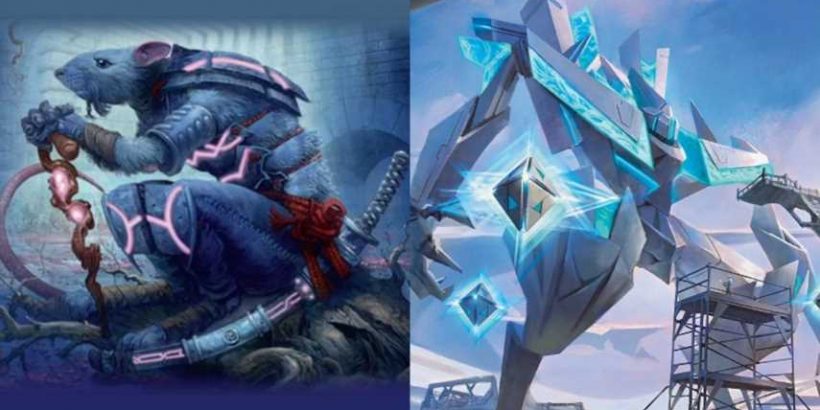 With a new Magic: The Gathering trading card game set releasing every few months they have the chance to stay and feel modern. This means that many of their cards reference current pop culture and entertainment, even calling back to shows infused with nostalgia and influence.

Kamigawa: Neon Dynasty was no different and the set's cyberpunk Japan plane aesthetic allowed the artists and designers to flex their muscles when it came to cleverly hiding easter eggs and references to their most beloved inspirations. 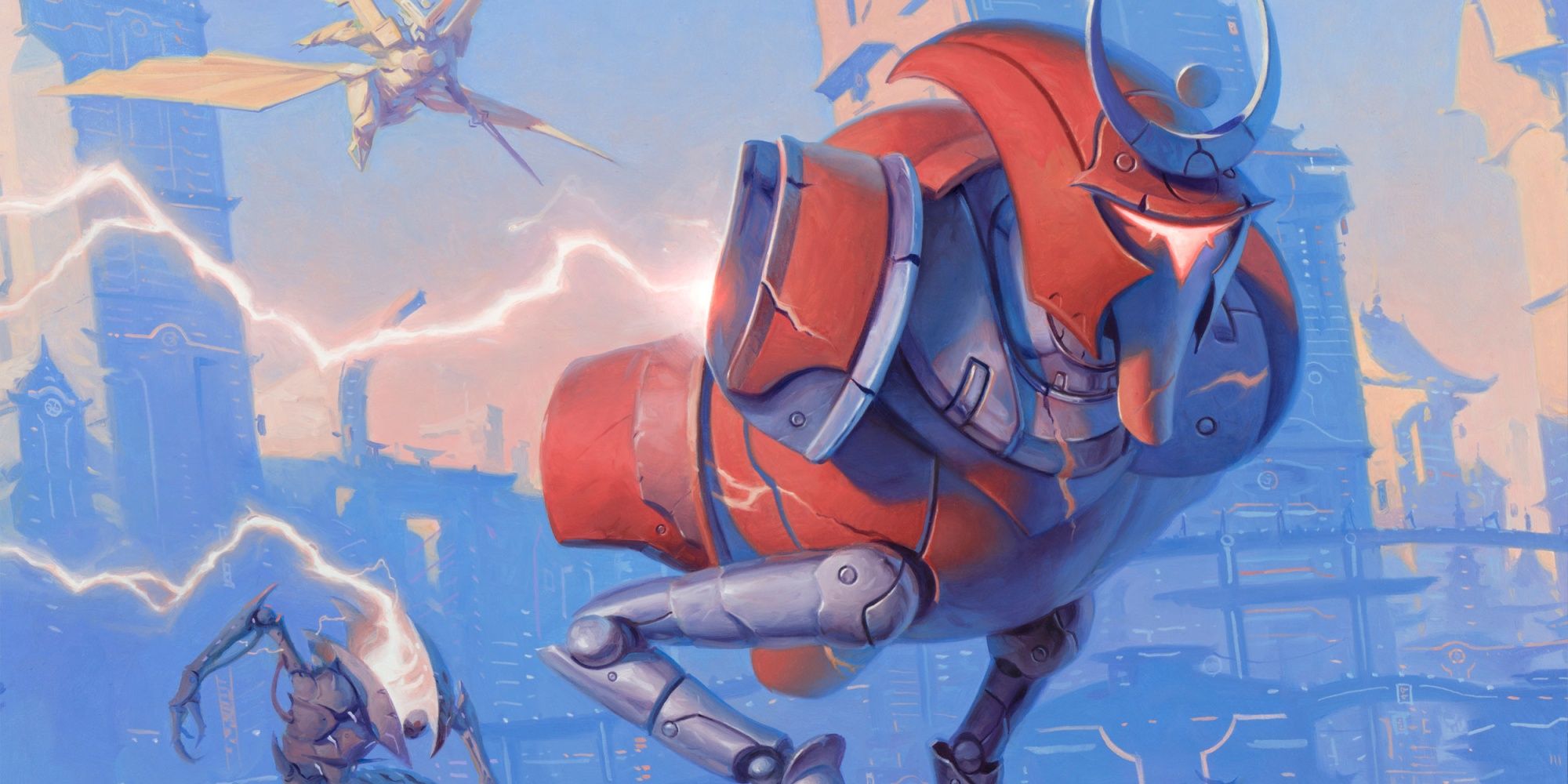 The card lets you turn five separate cards into one giant 10/10 artifact and lets you live out the fantasy or morph into a Megazord in the safety of your home or local game shop. 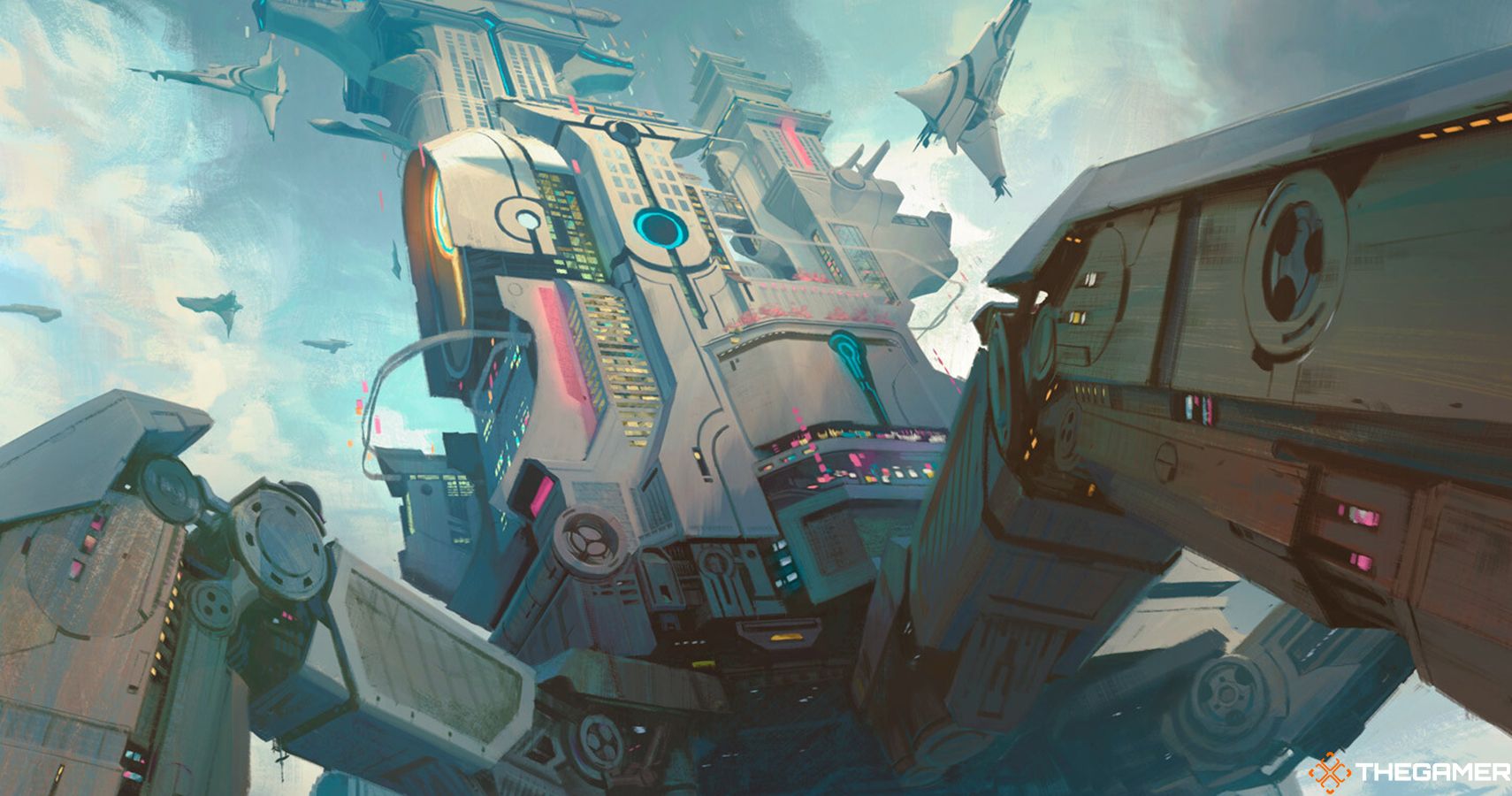 Kamigawa: Neon Dynasty is full of interesting artifact cards, including Walking Skyscraper. This 8/8 for eight converted mana seems to be a direct reference to the Mortal Engines series as it presents a giant building that moves around on six legs, like an architectural spider of sorts.

Mortal Engines is a series where entire cities on Earth are mounted on wheels and are constantly moving, functioning as large living vehicles. The film that came out in 2018 didn't review that well and flopped at the box office, but the fantasy novels have a sizable fanbase. 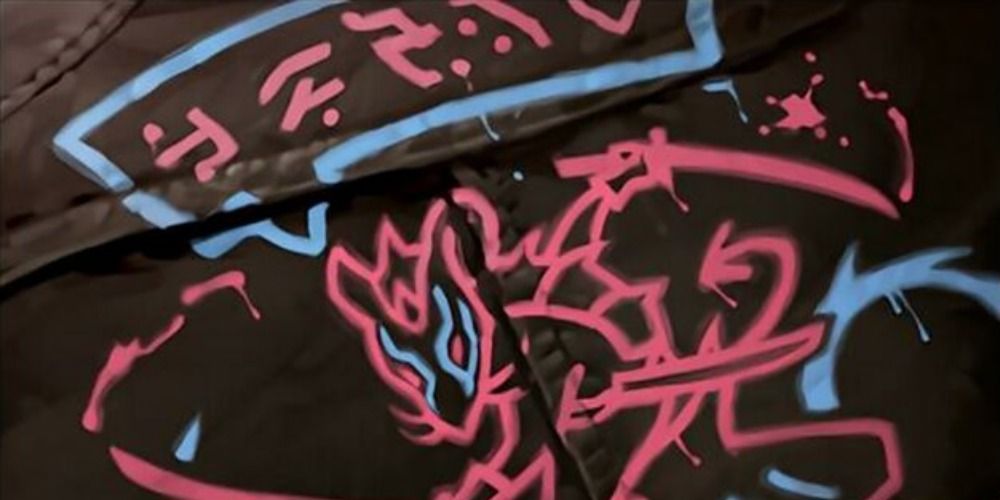 When the Okiba Reckoner Raid enchantment transforms into Nezumi Road Captain the art shifts from heavy cyberpunk vibes, to a reference to one of anime's most iconic films. In the film Akira, the lead titular character rides on an iconic red motorcycle. He performs a maneuver referred to as the 'Akira Motorcycle Slide' which seems to be the direct inspiration for the neon-infused jacket art presented on the card, Nezumi Road Captain.

It's nice to see people pay homage to such a classic part of anime's history. 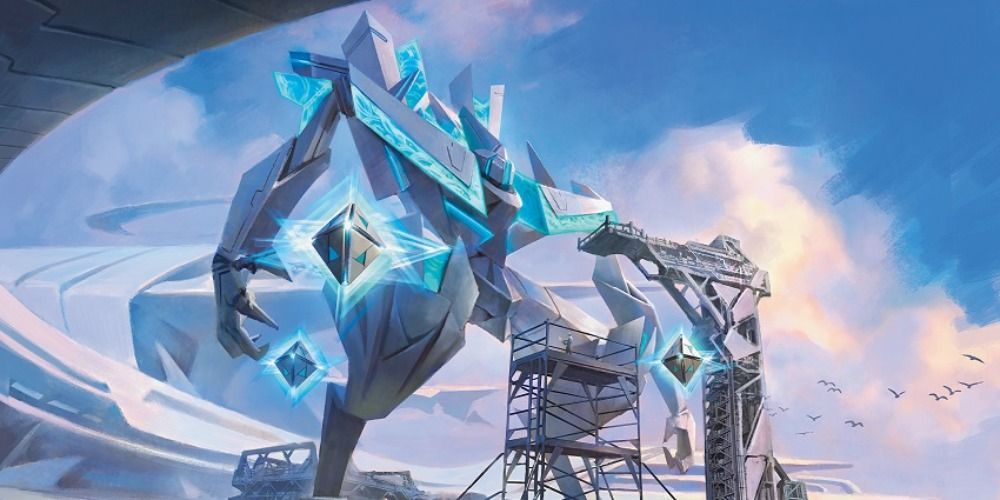 One could argue that Shorikai, Genesis Engine is simply referencing any and all mecha-related pop culture. The fact that this card summons pilots and has the word 'genesis' in its same seems like it is specifically inspired by Neon Genesis Evangelion.

This anime was released in 1995 and was praised for its complex and rich narrative that delivered a story unafraid to go where most animated series dared to. It's likely that many of the artists and designers working on the Kamigawa: Neon Dynasty set for Magic: The Gathering watched it in their youth. 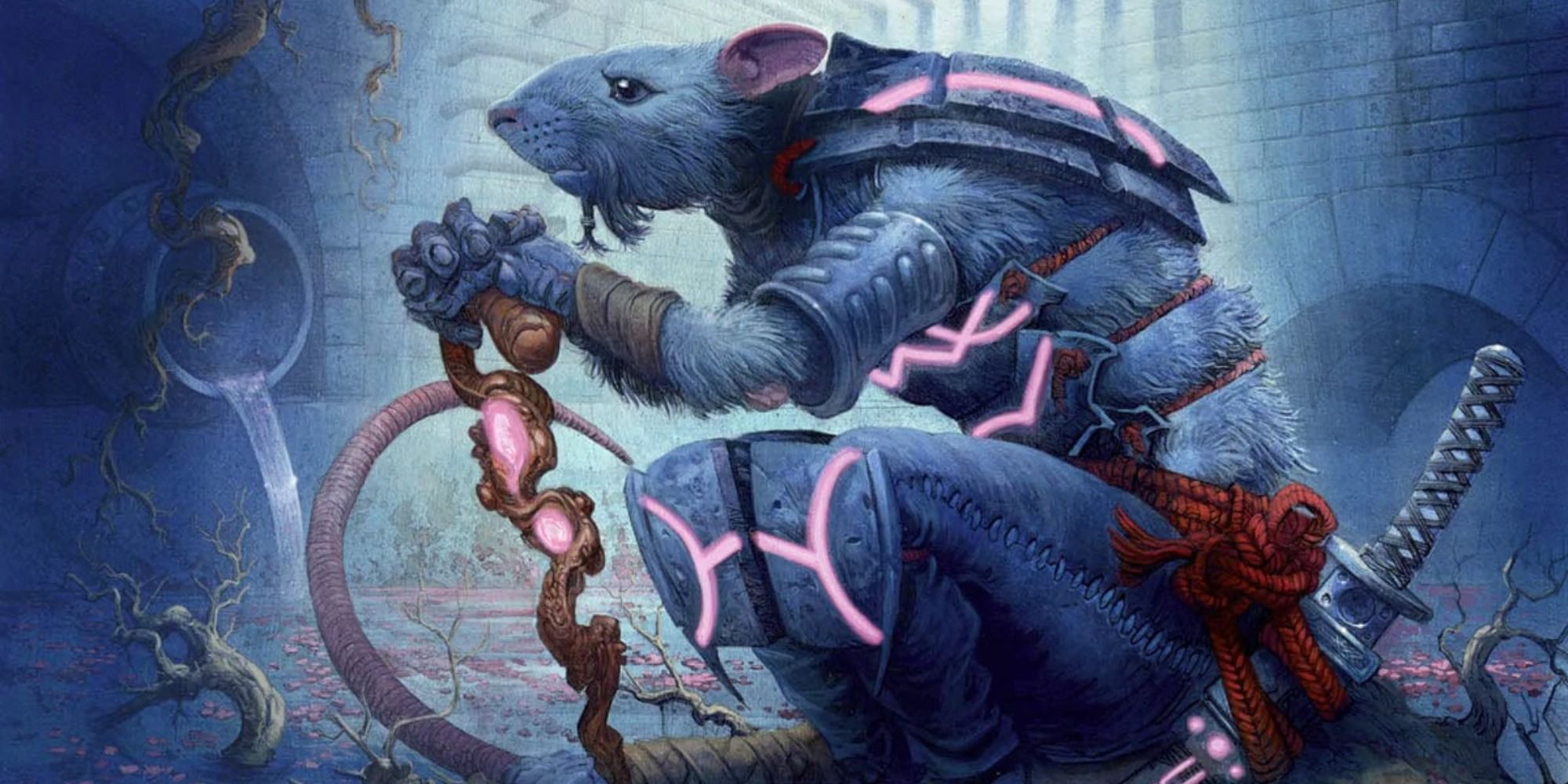 At first, it may seem like a stretch to say a rat that knows martial arts is a reference to Splinter from the Teenage Mutant Ninja Turtles series, but the card makes the connection all but true. Not only is this martial arts rat referred to as a master, but it also aids any ninjas you control, giving them +1/+1.

Add in the fact that the Kappu Tech-Wrecker card also in Kamigawa: Neon Dynasty resembles a Ninja Turtle, and it's clear that the Silver-Fur master is this plane's Master Splinter. Let's just hope that Shredder and Krang aren't also running around the cyberpunk streets, causing chaos. They'd likely take advantage of the futuristic technology to create the sense of power and control they've always desired.

Yoshimaru, Ever Faithful sports art that features a very loyal Shiba Inu dog that's seemingly waiting for its master. The Futurama episode titled 'Jurassic Bark' is notorious for a scene in which Fry's dog waits for him to return, laying in the same spot until it passed away. This heartbreaking episode of animated television seems to have partially been based on a dog by the name of Hachiko.

That's the name of a famous Japanese Akita that waited for its owner after he had passed, for over nine years. Dogs are extremely loyal and there's nothing sadder than watching them carry out that loyalty despite their owner either passing away or not returning. 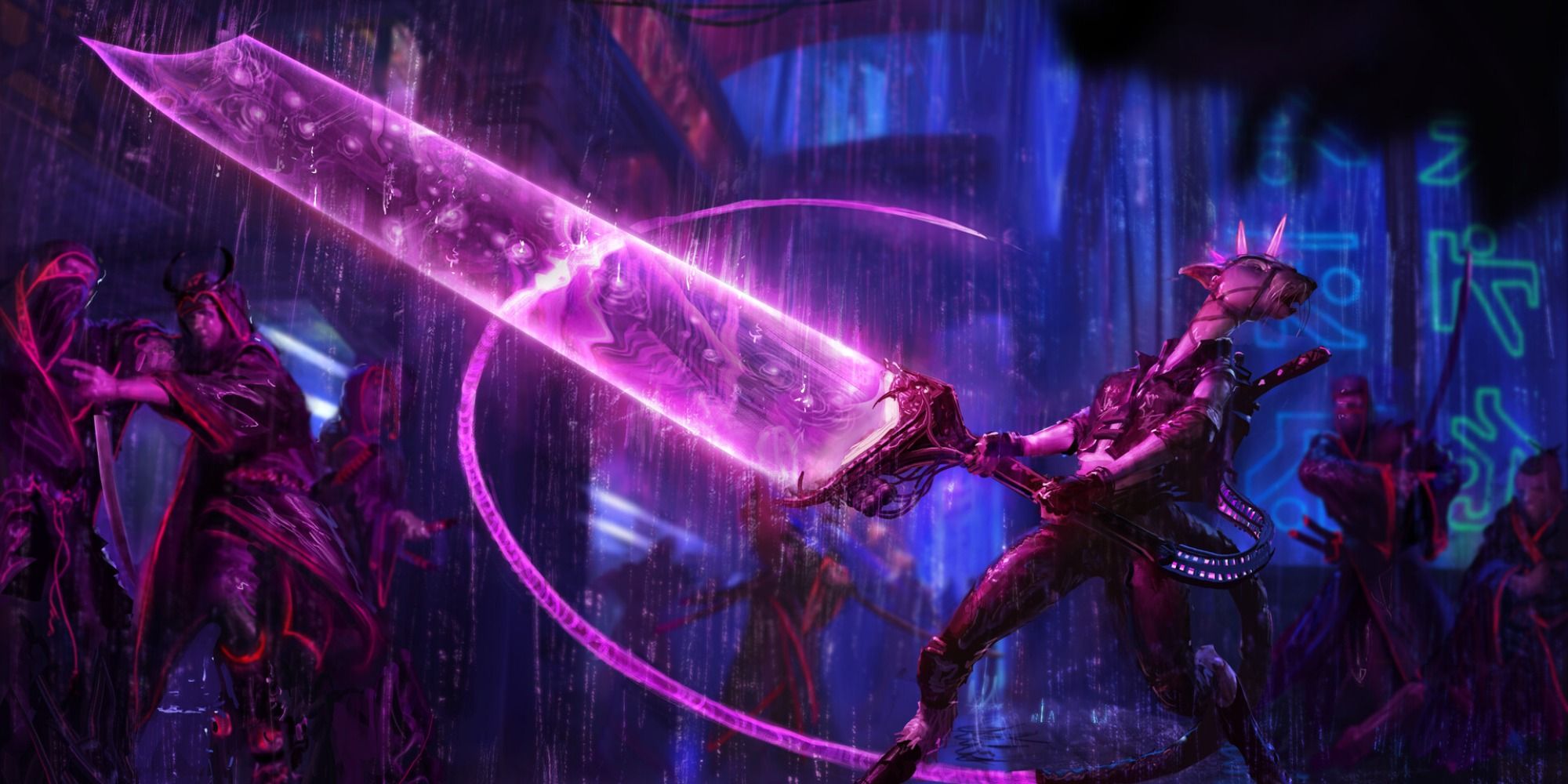 Anime in general is home to plenty of tropes fans make fun of. They tend to appear across generations, spanning dozens of shows. One such trope is the giant swords characters wield that are referred to in the world of memes as BFS.

The card Enormous Energy Blade is likely a callout to this specific trope and pokes fun at the most famous examples such as the sword Guts wields in Berserk and the famous Buster Sword from Final Fantasy 7 belonging to Cloud Strife. It seems that there's a new addition to the land of weapons no one should be able to functionally wield. 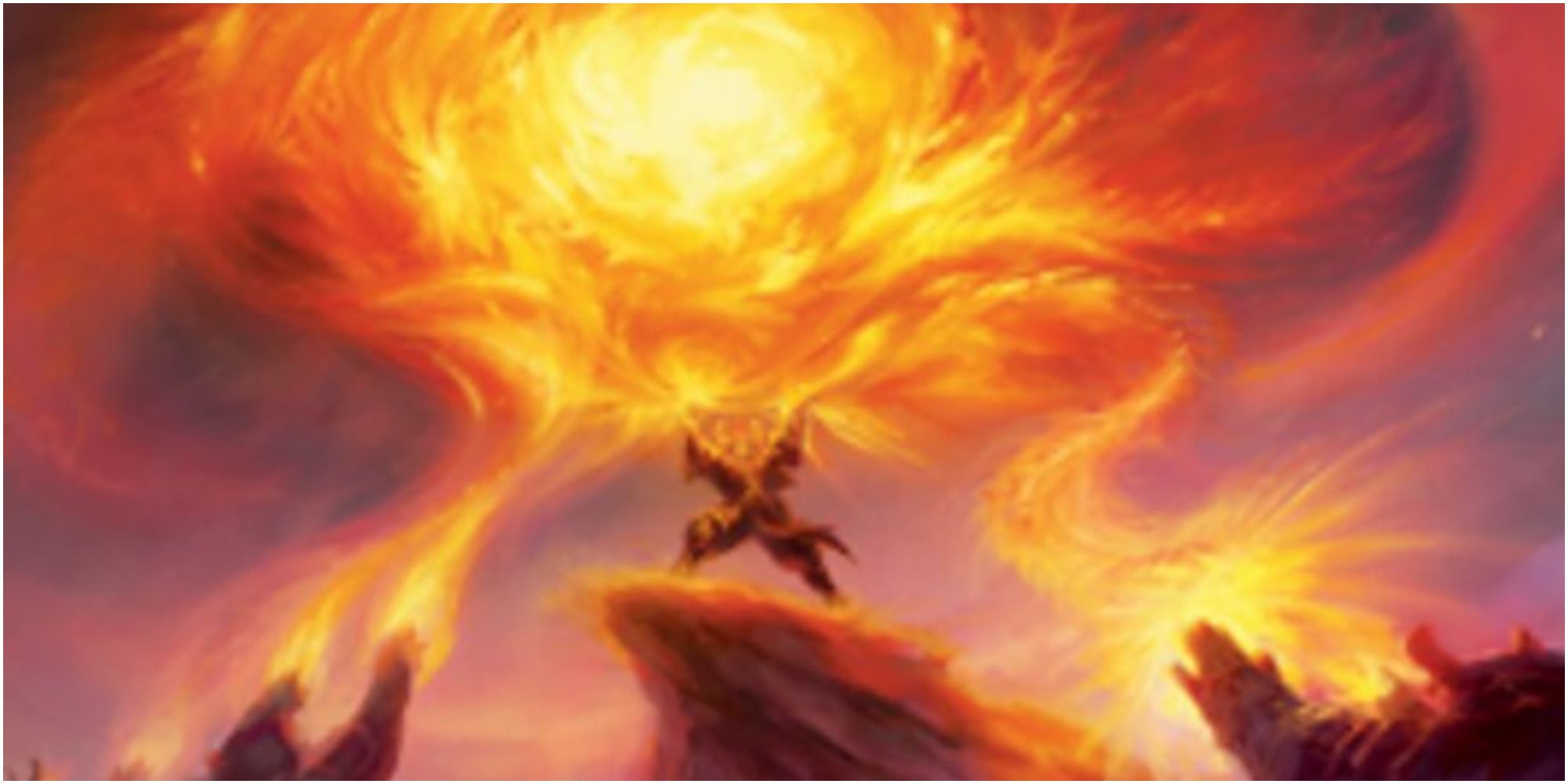 Explosive Singularity is a card featuring some dazzling art of three fire mages summoning and powering up a large fire-based spell. As they hold their hands in the air and the ball of flame is being imbued with their life energy it's reminiscent of a famous Dragon Ball event.

When Goku summons a Spirit Ball he makes the same gesture with his body. One could argue that Explosive Singularity could be referencing the powerful fire-bending displayed in Avatar: The Last Airbender by Lord Ozai and others.