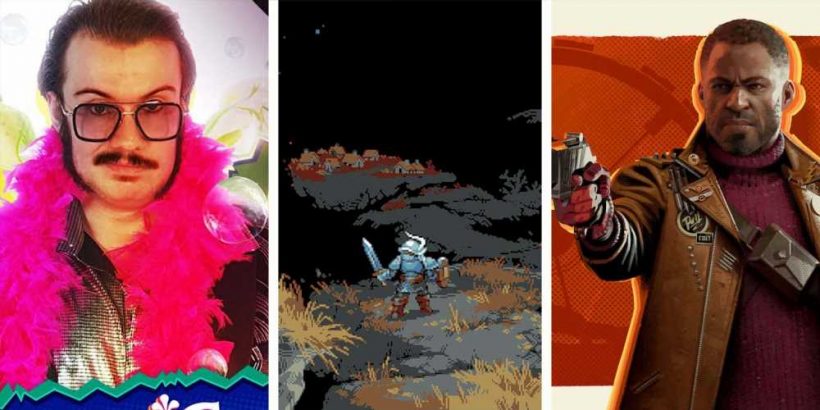 2021 had a ton of new gaming soundtracks that got us all pumped up while we smashed zombies, aliens, and manifestations of mental trauma in the face.

This is a list of the best gaming soundtracks we heard in 2021. Some of these are catchy, some are atmospheric, and some are just plain weird. Let's take a look at this year's best video game bangers.

Also, since this is a list of music that occurs at significant moments in these games, be aware that there may be some slight spoilers ahead.

Bravely Default 2 didn't end up being a smash hit like the first game in the series was, but it did manage to have a pretty killer JRPG soundtrack. After all, it's an RPG made by Square Enix. How could it not have great music?

Just about every track is grandiose and over the top with a full-blown orchestra, electric guitars, and occasional operatic warbling that pushes the drama to eleven. It's perfect music for saving the world through turn-based combat.

14 Guardians Of The Galaxy

Much like the Guardians Of The Galaxy films, this game has a full soundtrack of licensed music that would be enough to place it on this list. However, what pushes it over the edge is the fact that Square Enix put together a fictional hair metal band called Star-Lord just for this project. And they rule.

So not only do you get to hear songs from artists like KISS, Blondie, Billy Idol, and even Rick Astley, but you also get cheese-rock goodness like the song above.

We know this game came out 10 years ago, but under what we call the "Tony Hawk Pro Skater 1 + 2 rule," we're counting remasters for this list. Plus, it gives us an excuse to mention the songs of The Old Gods Of Asgard. There need to be more games that give us exposition through rock ballads.

It feels like a bit of a cheat putting Halo Infinite on this list since it recycles a lot of iconic tracks from past games in the series, but come on, it's Halo. This franchise is known for its unique soundtrack full of orchestrated tracks with pounding drums and overly dramatic Gregorian choirs. It really captures the feeling of being a beefed-up super-soldier who's in the middle of saving the universe on a giant space ring. It's also fine music for punching Grunts in the face.

This list is about the best soundtracks, but bizarre soda-dating simulator OnlyCans is really only making this list because of its incredible theme song. Seriously, we're not even going to go into detail about it. Just listen to the song and prepare to be strangely aroused.

If you're going to make a game that invokes the feeling of classic NES or SNES titles, then your soundtrack better be up to snuff. Thankfully, Cyber Shadow has music that's great for smashing tough bosses while doing some difficult 2D platforming.

Sable is a calm and contemplative game, and its soundtrack matches that vibe perfectly. Written and performed by indie-pop band Japanese Breakfast, this music gives the game a dreamlike quality that gels with its cel-shaded world. It's great for gliding around and would probably fit nicely into one of those "low-fi music to study to" playlists as well.

Oh look, another Square Enix game on the list. This expansion to the popular MMO came out rather recently so we're a bit hesitant to go into too much detail about it. But in typical Square Enix fashion, a huge orchestra and a melodramatic choir will be backing you and your crew up through many of the dungeons and boss fights.

Deathloop's soundtrack does an amazing job of setting up the world and atmosphere of Blackreef. There's a specific musical motif that repeats throughout many of the tracks that make things feel like a mysterious and tense James Bond film. Many tracks start off slow while Colt is stealthing around the level only to explode into loud, grungy rock once he starts firing bullets and using his powers.

One track in particular that needs to be mentioned is "City Lights/Ode to Somewhere" since it oddly doesn't appear on the official soundtrack. It's a far too accurate parody of a classic 60s love song that seems like it shouldn't belong in Deathloop but fits it like a glove.

The fantastic orchestrated music in Psychonauts 2 would be enough to get it on this list, but it also features a psychedelic rock song inspired by The Doors with Jack Black providing the vocals. So yeah, it's pretty good.

The Artful Escape is a cosmic adventure all about music, so it's not surprising that it has a great soundtrack. Whether it's the folk music of Francis Vendetti's uncle, the powerful synths, or the various guitar solos, this charming indie adventure has more than enough tunes to keep you travelling through space and time. It all culminates with an epic light show with a giant alien bug-brain-thing named The Glamourgonn that may rank up there as one of the greatest concerts in video game history.

Sometimes you just need music that's appropriate for beating people up. Guilty Gear Strive has a whole lot of that. Pretty much every song is a fast-paced metal tune with near-indecipherable lyrics that would make an ideal theme song for an anime that's solely about kicking someone's ass. This is what fighting game music should be.

It's hard to imagine that a game released by Toby Fox wouldn't have some absolute bangers in its soundtrack. There's an impressive mix of supremely catchy chiptunes here. Some of these might even give "Megalovania" a run for its money.

Any time a new Nier title is released – even if it's a remaster – there's no way that it won't have one of the best soundtracks of the year. It's hard to deny that Square Enix is the best at creating epic, emotional music. Choose just about any song from this game and it's bound to pull at your heartstrings while also getting you ready for one hell of a boss fight.

We appreciate good chiptunes, but Loop Hero's music is on a whole other level. It manages to simultaneously invoke old-school video games of the 8-bit and 16-bit era, lend a feeling of hopelessness and dread to its dark, empty world, and sound like the most badass music to destroy cosmic entities to.

It's the kind of music that makes walking around in a circle feel like the coolest thing you've ever done. Loop Hero is one of the best indie games of 2021 and its mind-blowing yet atmospheric soundtrack ranks up there with some of the best soundtracks in gaming. Once you start listening to it, you'll want to start looping all over again.