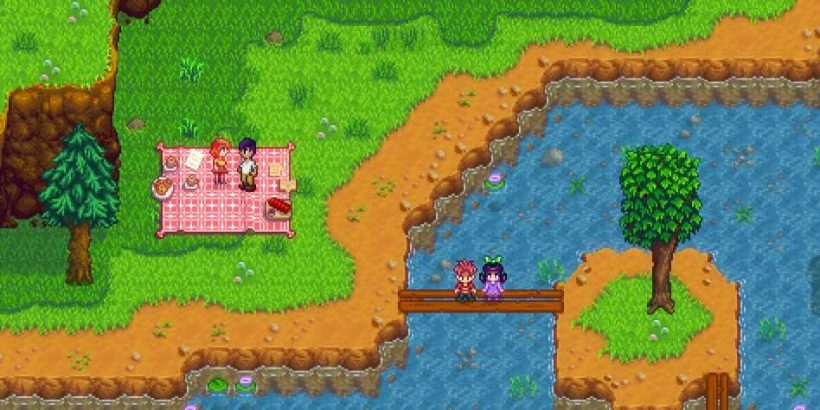 Indie darling Stardew Valley took the gaming world by storm when it was released in February 2016. Developed by a single man named Eric Barone, the game has managed to find its way onto several different consoles, including the PlayStation 4, Xbox One, and Nintendo Switch.

At face value, it’s a simple farming game where your character has inherited their grandfather’s farm and must work to restore it to its original glory, with typical RPG elements like finding a romantic partner.

Even the gameplay is deeper than just planting seeds and waiting for them to grow — but this guide will help anyone find their footing in the Valley.

Updated on April 19, 2021 by Michael Christopher: Stardew Valley has remained one of the most popular games, and new updates filled with content have helped keep it fresh. We’ve updated this guide to ensure it’s as clear and helpful as possible for any newcomers. Also, while you’re here, check out our complete guide for new players. 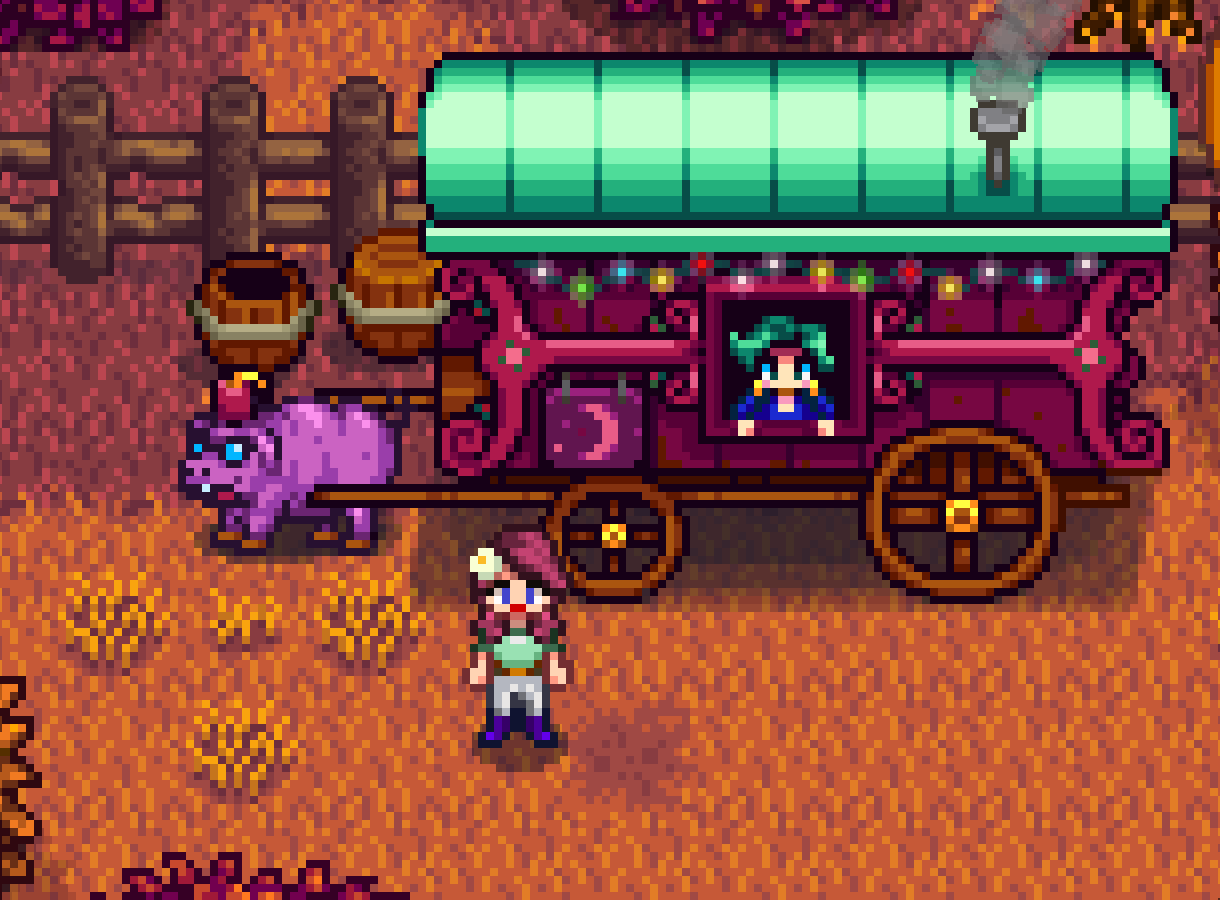 Every Friday and Sunday, a Traveling merchant and her pig will appear in the Cindersap Forest west of the entrance to your farm. This merchant sells a random assortment of items from 6 a.m. to 8 p.m. Here, you’ll find stuff you need for the Community Center that’s hard to come by, Rare Seeds that can be planted to grow Sweet Gem Berries, cooked meals, furniture, and much more.

It’s a great idea to check the Traveling Cart every Friday and every Sunday — you never know what you’ll find. 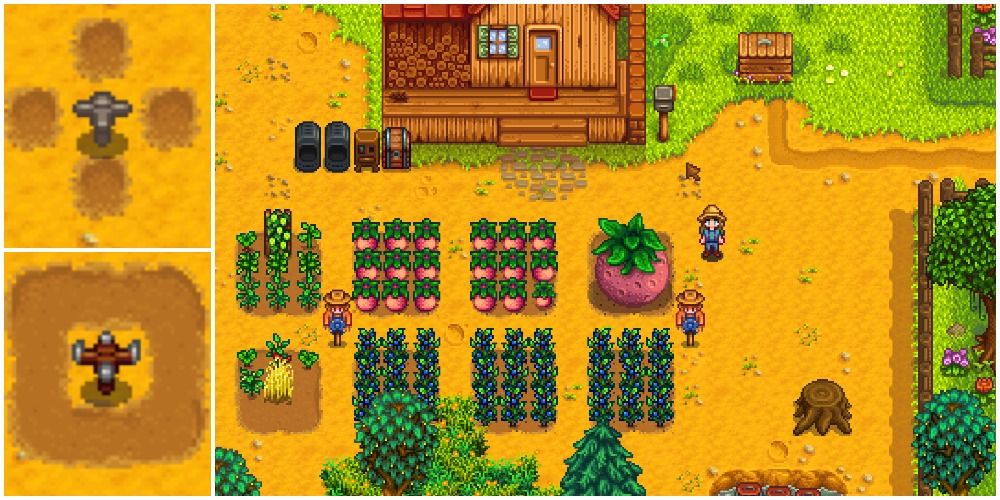 Stardew Valley allows players to have near-complete control over the layout of their farms, so you can actually do whatever your heart desires, but there are some advantages to planting your crops in certain formations.

When Cauliflower, Melon, and Pumpkin are planted in a 3×3 formation and allowed to reach a full-grown state, there’s a chance that the middle crop will combine with the eight adjacent ones to form a giant crop instead. Giant crops are harvested with an axe and provide double crops, so you’ll get a total of 18 pieces of produce!

Planting things this way looks neat and organized, plus it makes using proximity-based things (like Sprinklers, Scarecrows, and Bee Houses) a lot easier. It’s especially helpful for the first two levels of sprinklers. The basic Sprinkler waters four adjacent squares, while the Quality Spinkler water the eight adjacent squares, meaning both operate within a 3×3 tile grid.

Additionally, upgrading your Watering Can and Hoe will allow them to operate in 3×3 grids, making this much more convenient.

9 Grow As Much Cauliflower As Possible 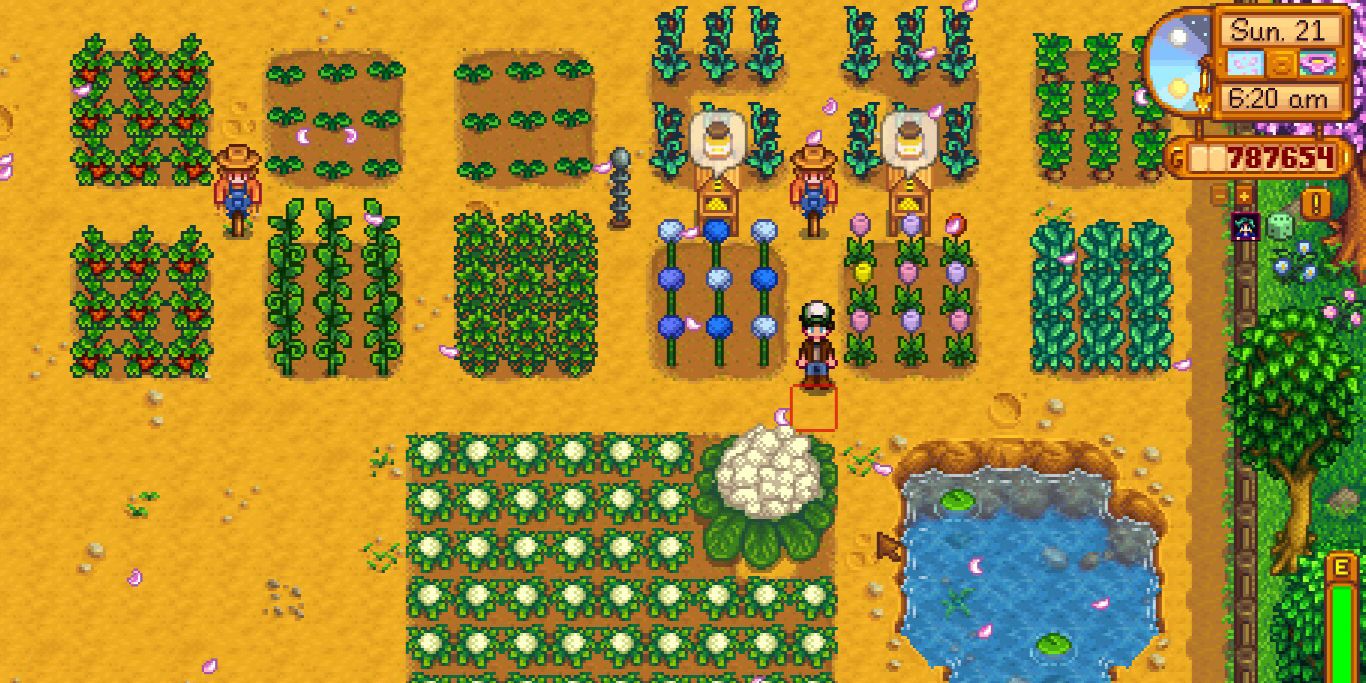 Cauliflower is a slow-growing crop that takes a total of 12 days to become full-grown, and its seeds are 80g each at Pierre’s, which is pretty pricy in comparison to other Spring crops. It is, however, worth it, because the payout is more than double.

Even without the Tiller profession, a single Cauliflower at basic quality is worth 175g, while silver ones are 218g and gold ones are 262g. It can be even more profitable if you save some for when you’re able to get your hands on a Preserves Jar to make Pickled Cauliflower.

It’s a good idea to grow Cauliflower in addition to other crops, particularly Kale and Strawberries, but focusing on acquiring as much as possible as early as possible is definitely recommended! If you manage to plant them within the first four days of Spring, you can have two separate harvests by the end of the season and rake in a considerable amount of gold.

8 Save Up To Buy Strawberry Seeds At The Egg Festival 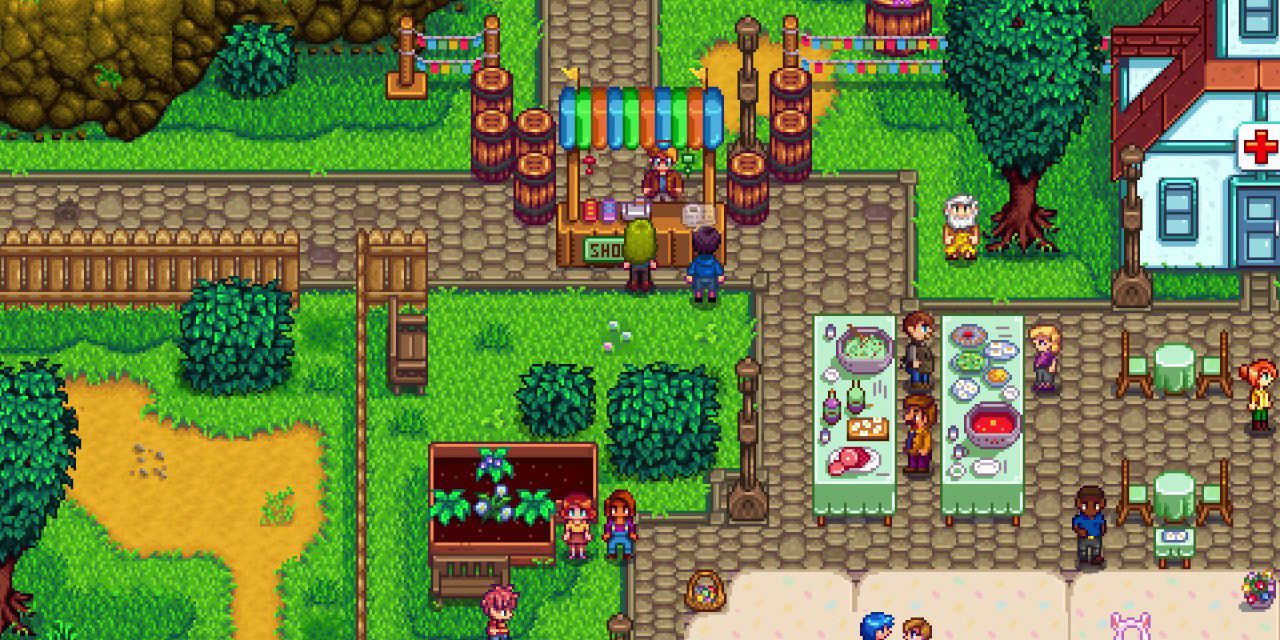 On the 13th day of each Spring season, the Egg Festival takes place. The town is decorated with cutesy pastels and there’s an egg hunt where you can compete with your friends and villagers for an exclusive hat.

However, what’s truly important is the fact that you can purchase Strawberry Seeds here. Strawberries are a remarkably profitable crop (basic quality sell for 120g, silver is 150g, gold is 180g) that needs eight days to mature, and has a chance of giving multiple Strawberries each time it’s harvested. After the first harvest, the plant will continue to produce Strawberries every four days.

With no boosts, planting the seeds the day of or after the Egg Festival will allow for two harvests, while planting them the next year will allow for five. It’s up to you! Just remember that with a Seed Maker, you can always turn Strawberries into Strawberry Seeds to use next spring.

Additionally, don’t forget you can use Deluxe Speed-Gro to make the plants grow faster, giving you a higher number of harvests per season. When planted the day after the Egg Festival with Deluxe Speed-Gro, you can squeeze in three Strawberry harvests. Regular Speed-Gro still only allows for two harvests, though, so save it for something else.

7 Get Your Hands On Some Machines ASAP 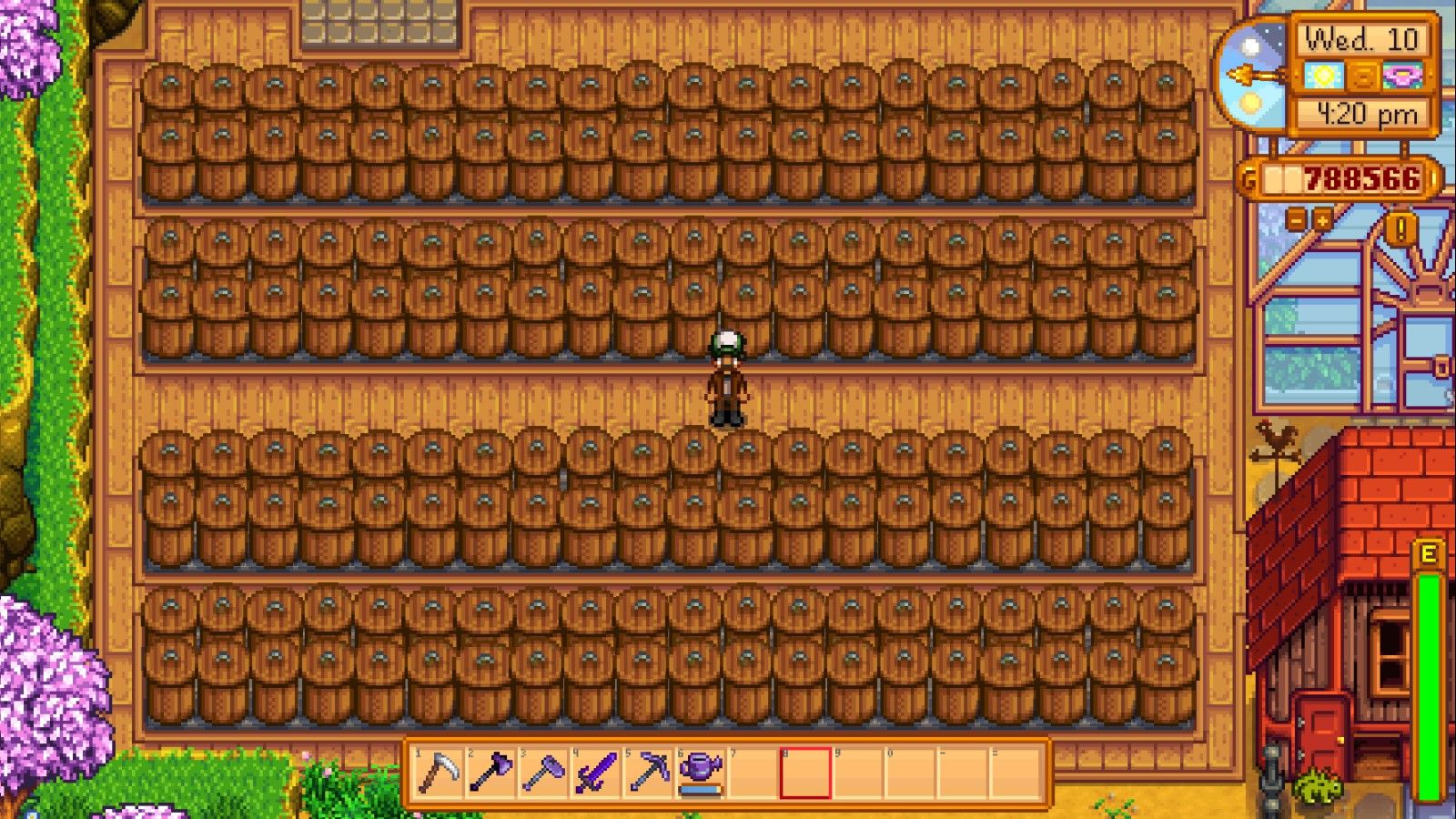 There are a few different types of machines in the game. Seed Makers can turn produce into seeds, making it easier to access rarer crops, and Kegs can turn fruits and vegetables into Wine and Juice in seven days, making them worth 3x their base value.

Getting those is important, obviously — but not nearly as important as a Preserves Jar.

A Preserves Jar takes fruits and vegetables and turns them into jelly and pickles. It only needs between two and three days to do it and it makes them worth 2x their base price + 50g. Quality doesn’t make a difference, so it’s a good way to squeeze some extra gold out of basic produce.

6 Repair The Beach Bridge Before Summer 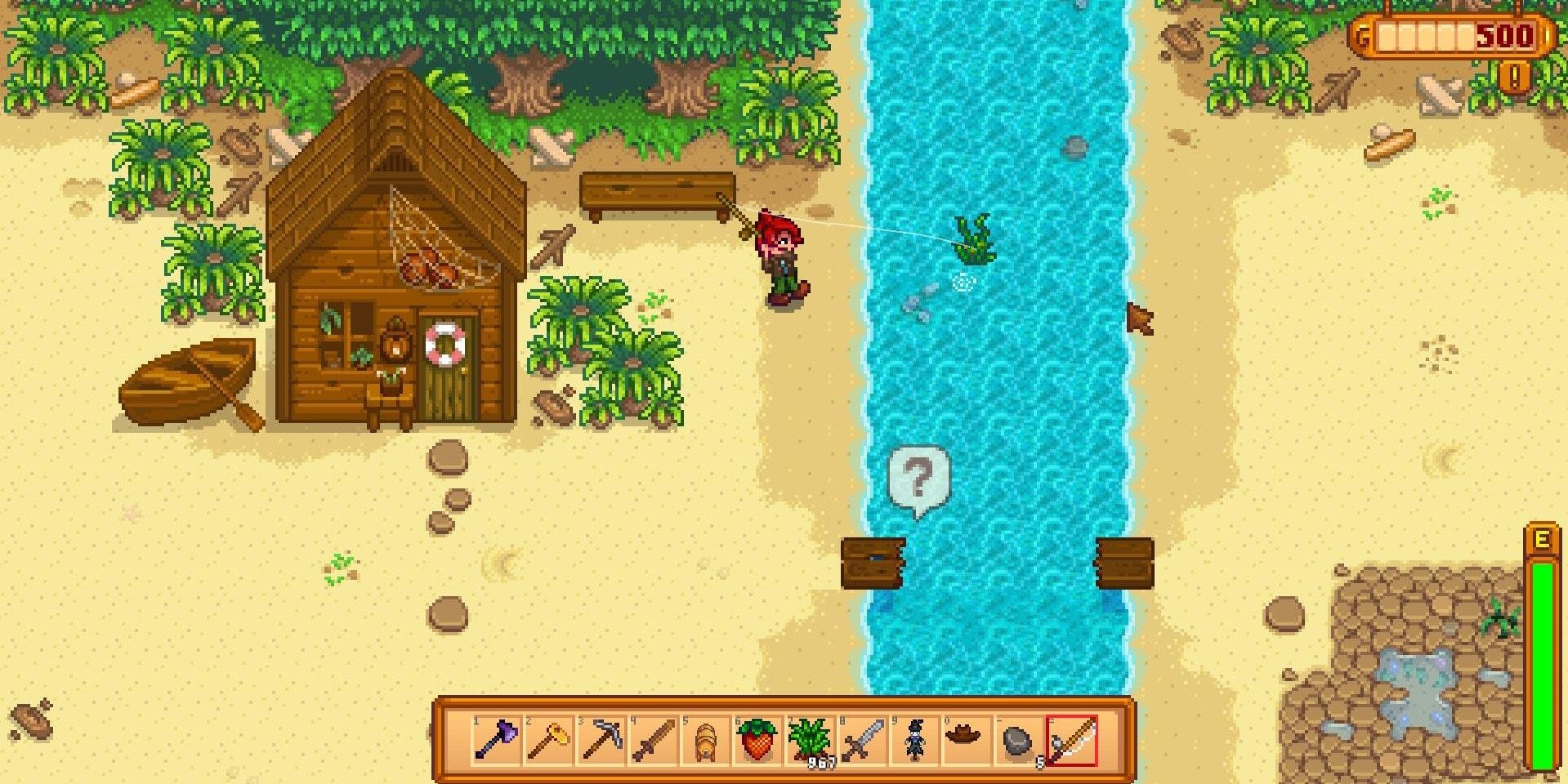 At the beach, there’s a broken bridge that can be repaired using 300 pieces of wood. Across it, there are several tidal pools that contain an exclusive forageable: Sea Urchins. A basic-quality Sea Urchin is worth 160g, and one can be used for the Dye Bundle at the Community Center.

During rainy or stormy weather, the Old Mariner will appear at the edge of the tidal pools, and you can buy a Mermaid’s Necklace from him, which allows you to propose to any villager that you have a ten-heart relationship with.

Both of these reasons to repair the bridge are important, so be sure to use some wood to do it earlier on, rather than later. 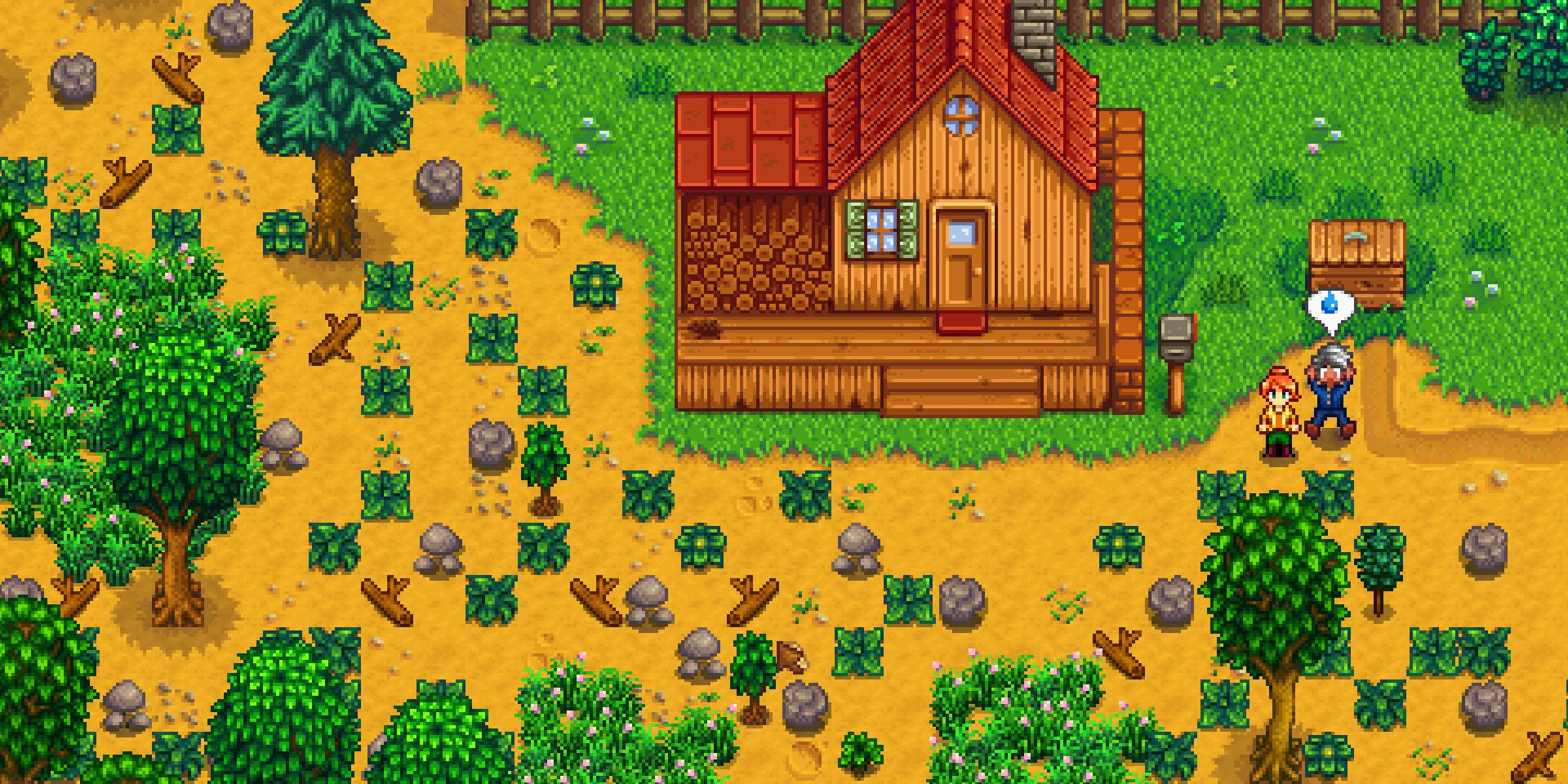 Running out of energy leaves you unable to do anything and staggering along at a snail’s pace. Cutting down trees, smashing rocks, and cutting grass might seem tempting, especially when in the beginning stages of setting up, but it’s important to focus on what actually matters: farming.

Planting, watering, and harvesting crops should be the first thing you do with your energy in the mornings! Once you’ve done your watering, planting, and whatever else you need to do for your crops, it’s then worthwhile to go foraging or socializing with the townspeople. Neither of these activities require any energy, so it’s a much better way to spend the second portion of the day.

4 Giving Out Random Gifts Might Make People Hate You 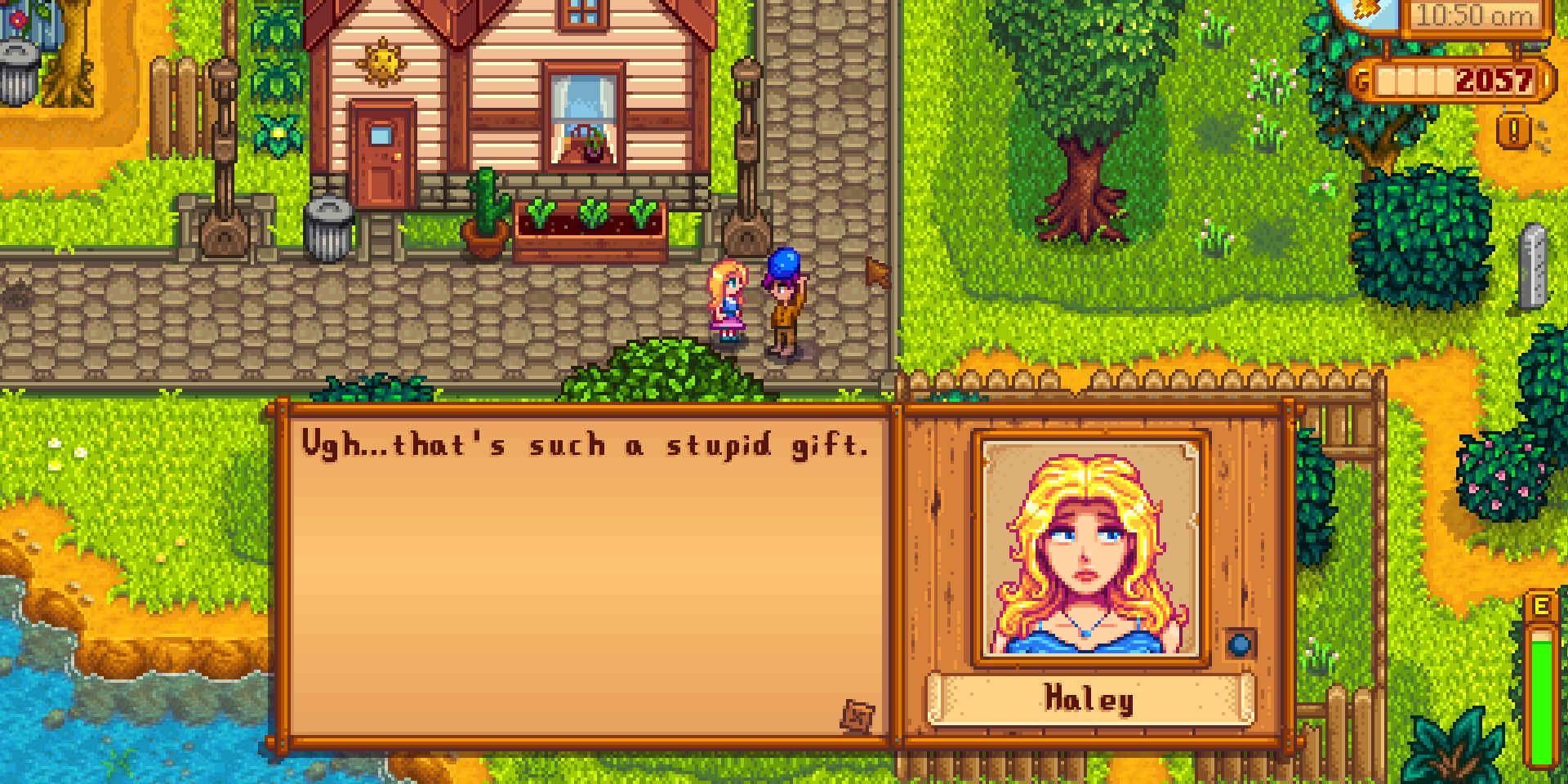 Going around passing out gifts indiscriminately will make winning the villagers’ friendship harder. Each villager has things that they love and things that they hate, and they have a significant impact on your relationships.

For example, Haley dislikes all fruit except for Coconuts, which are one of her favorite things. Taking the time to look into their gift preferences will make playing the social side of the game a lot easier.

It’s important to be careful about what you’re holding in your hand when you talk to a villager, since it will automatically be given to them as a gift!

Once you’ve given someone something as a gift, it’ll show up in the social tab with their preference for it. Use this to keep track of what people — and just as importantly, what they don’t.

3 Wait For A Greenhouse Before You Buy Fruit Trees 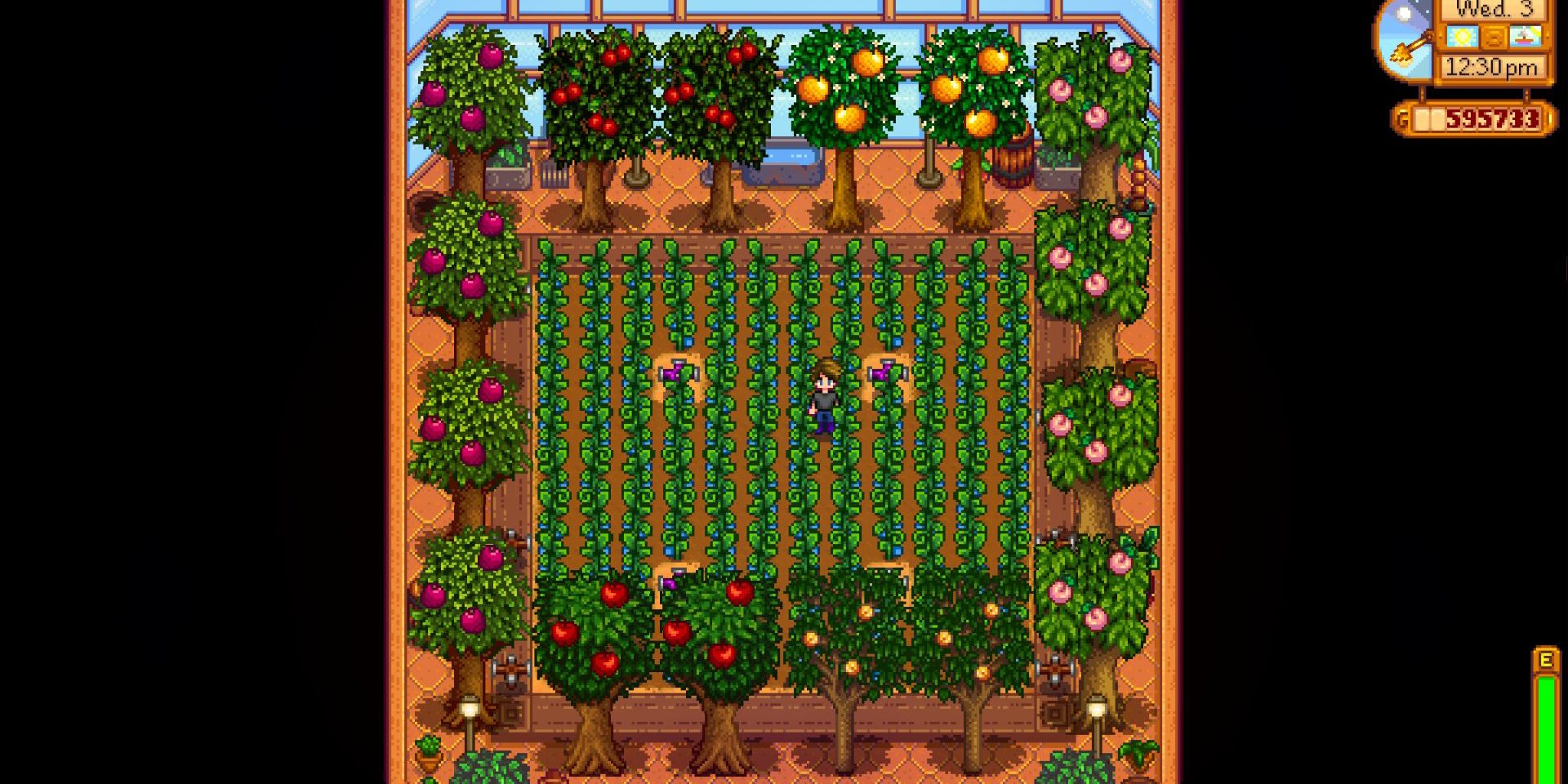 Fruit trees are incredibly expensive so it’s not likely that you’ll be in any rush to sink thousands of gold into one, but even if you are, try to resist that urge! After either completing all of the Pantry bundles in the Community Center or purchasing it from the Joja Community Development Projects, you’ll have access to a Greenhouse.

Inside the Greenhouse, you can grow crops regardless of their season. That’s why it’s the best possible place to plant your fruit trees, but since it’s currently not possible to relocate trees without a mod, it’s a good idea to just wait it out.

Fruit trees will grow in the Greenhouse if you plant them on the tiles around the plot of land where you can grow crops, even though it doesn’t really look like it. They’ll grow and produce fruit regardless of season, so it’s the best place to get your money’s worth from them.

2 Think Very Wisely Before Investing In A Coop 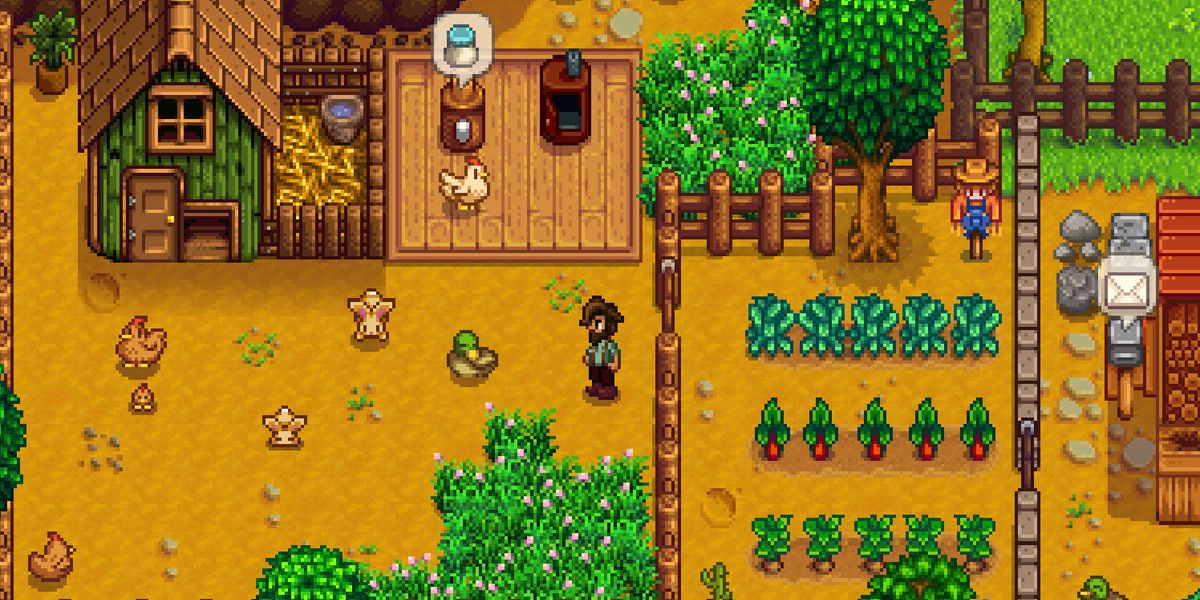 In the first handful of quests given by the game, you’ll be prompted to build a Coop. It seems like a decent starting point for a farm, and it is for some people, but make sure to think it through!

Building a Coop costs 4,000 gold, plus 300 wood and 100 stone. Each chicken will cost 800g and they need to be fed hay, which can be 50g a piece unless you’ve built a Silo. Simply put, it’s a huge investment and it takes a while to make your gold back.

However, Mayo can be a great source of income early in the game, so it’s up to you. Eventually, you’ll be able to build a few Coops if you want, but early on, it’s quite the investment. Don’t feel pressured by the early quest to build a Coop — you have all the time in the world.

1 Those Bundles Are Important (So Save Up For Them Immediately)

After the 5th day of your first Spring, the Community Center will be unlocked, and so will the first few bundles. Assuming that you choose this path instead of selling out to Joja, those bundles are going to be an important part of your gameplay.

It’s a good idea to immediately start saving up at least one of each type of Spring forageable you find so you can complete the Spring Foraging bundle as quickly as possible, which will get you a collection of 30 Spring Seeds as a reward and bring you one step closer to one of the powerful rewards.

Make sure to hold onto at least one Parsnip for the Spring Crops Bundle and look into planting cauliflower, potatoes, and green beans ASAP. One of the bundles requires five gold-quality Parsnips, so make sure you hang on to those to donate. If you choose the Remixed Bundles at the beginning of the game, stacks of five gold-quality Green Beans, Cauliflower, and/or Potatos can also be requested.

Other things to keep an eye out for are Quartz, different types of Mushrooms, and a Sea Urchin (see above!). 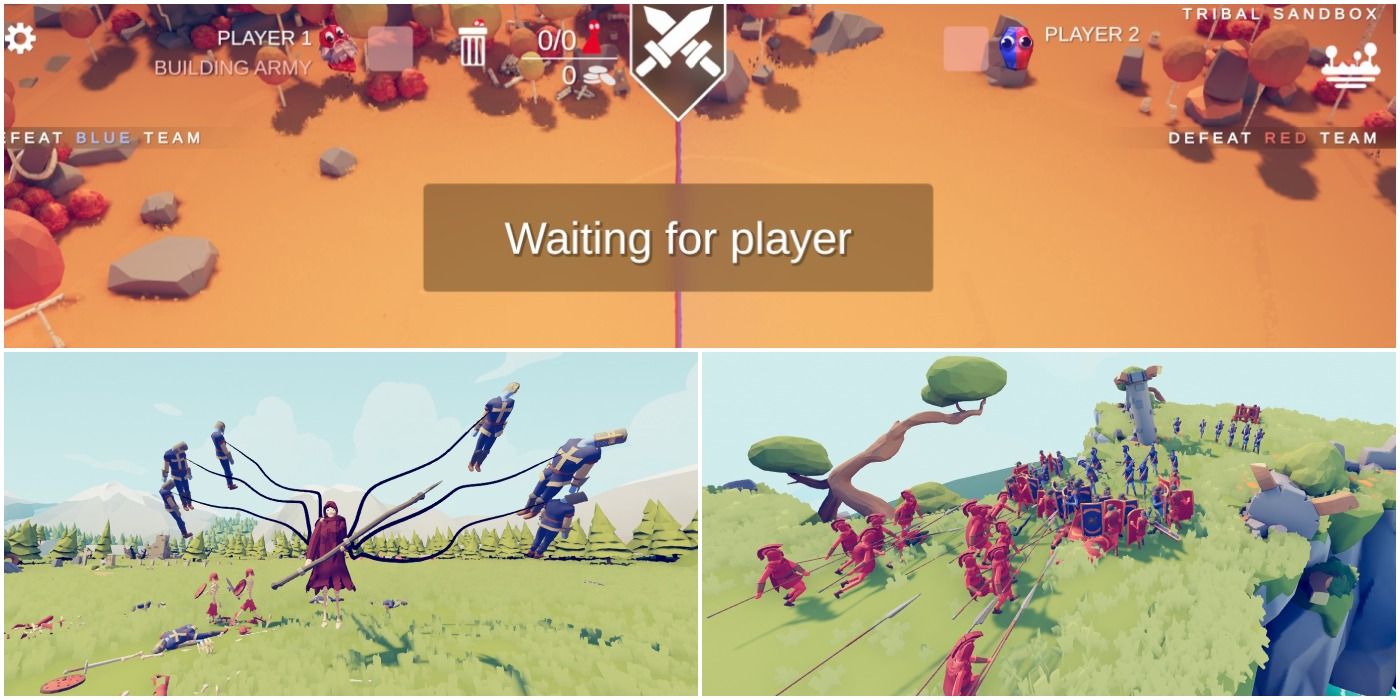