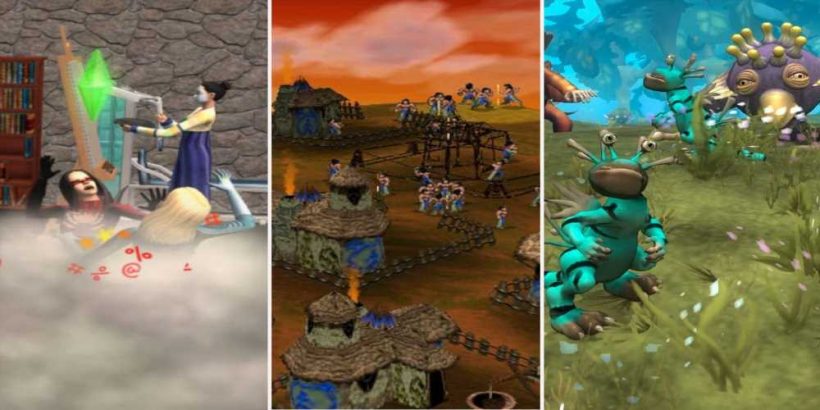 In a God Game, you take on the role of a powerful god or deity that observes and interacts with a large-scale world. These can range from planets spread across galaxies to worlds outside our existence – like heaven and hell – or even just a single city. Within these worlds live inhabitants that will live or die based on the role you choose to take as a god. 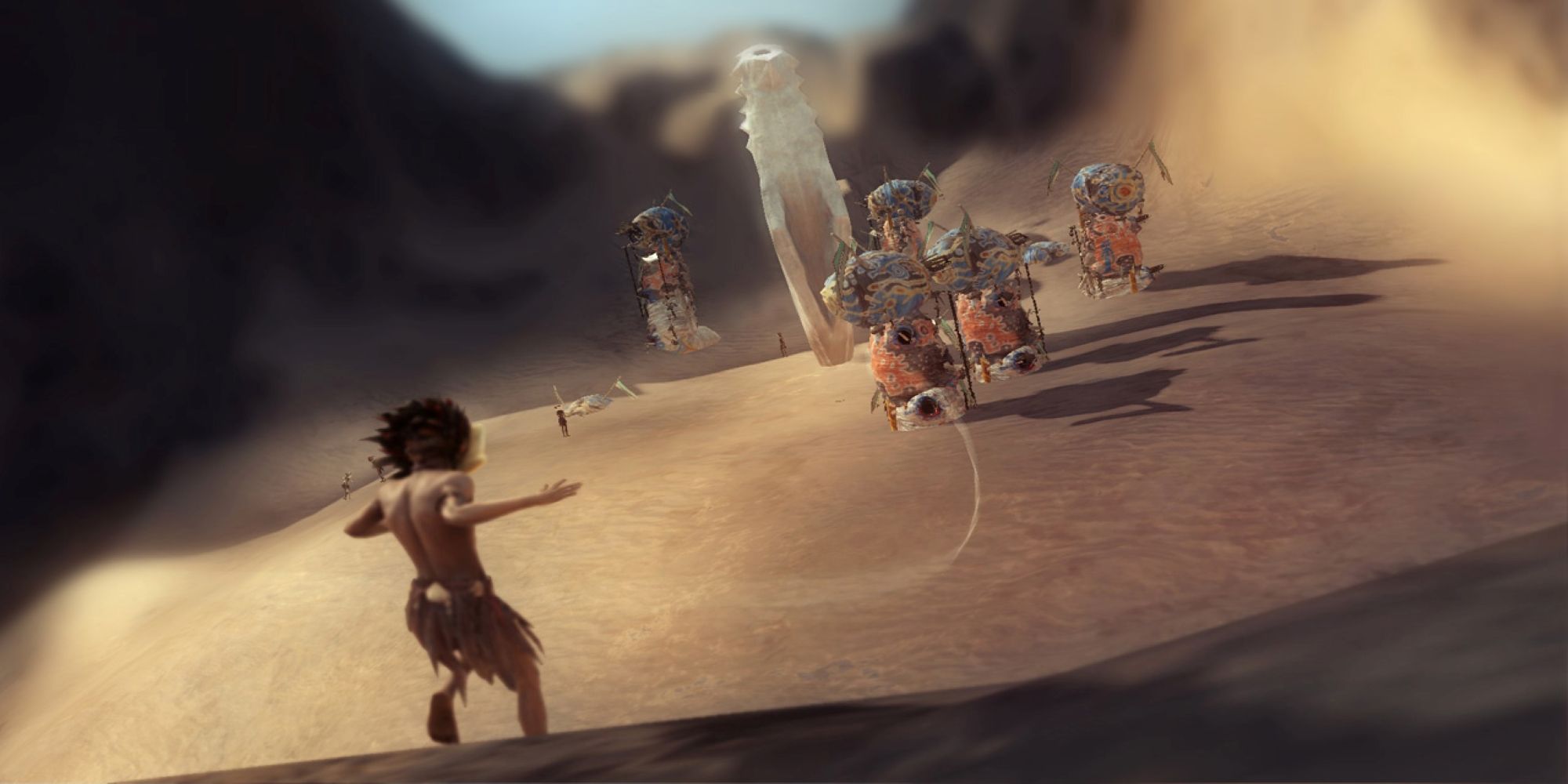 You take on the role of a God who has control over the unique elements of Nature. Your goal is to battle mother nature herself to protect your tribe as she tries to take them down by using tsunamis, volcanoes, earthquakes, and wildfires.

From Dust features a state-of-the-art nature simulation where the world dynamically evolves throughout your playthrough. There are thirteen different areas, each with its natural forces. From Dust offers online leader boards where you can compare your score in the Challenge Mode with others across the globe. 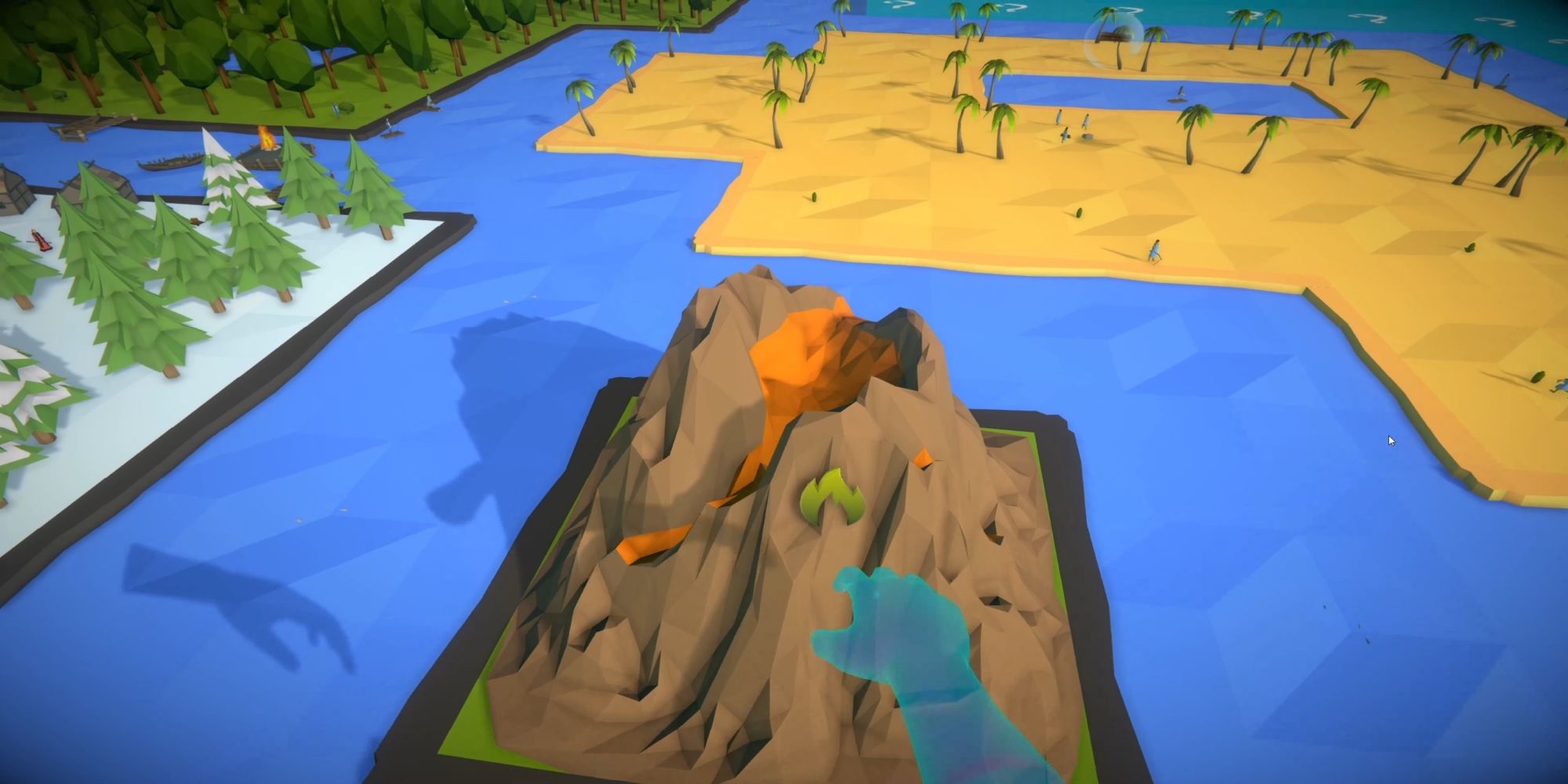 Deisim is the only VR title on this list, and it is essential to know that you must have a VR headset to play this game. Build a world, populate it with humans, and watch it evolve in a sandbox environment.

The game is still in early access so the developers can put more effort into the game’s mechanics – which are extremely well done. The graphics and music are very simple but work well enough in the VR play space. So much so that Deisim won the 2021 AR/VR Game of the Year award. 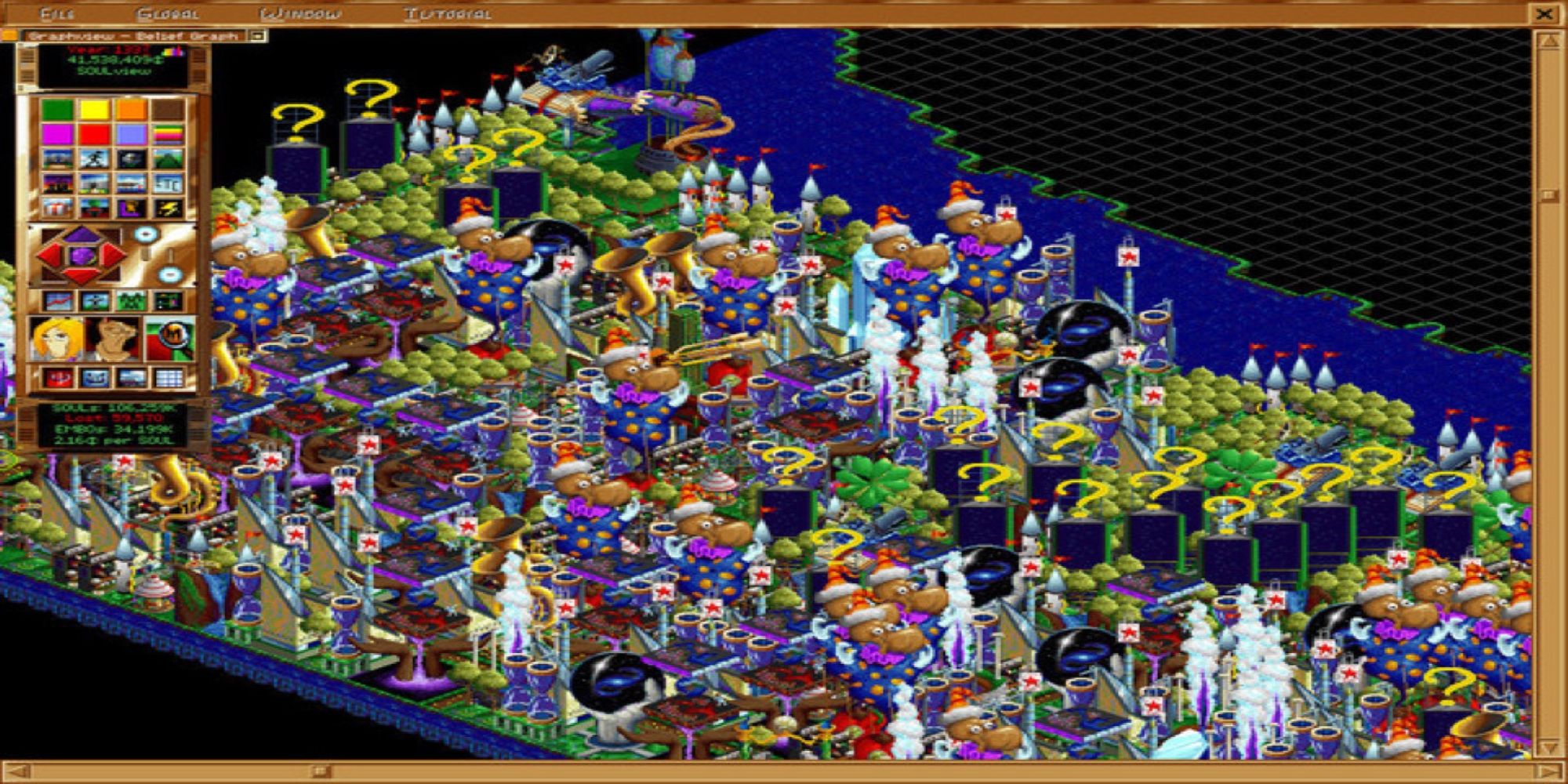 The LucasArts created Afterlife was launched in 1996 on DOS, MAC, and WIN9X but is now available on platforms like Steam and GOG. You take on the role of the Regional Spiritual Director, who is responsible for creating two places called heaven and hell.

Once you have started building heaven and hell, you will be accountable for rewarding those in heaven and punishing those in hell while navigating supernatural disasters that threaten the population. There are over two hundred rewards and punishments at your disposal. There are also almost three hundred tiles, buildings, maps, and charts that will aid you in your new position. 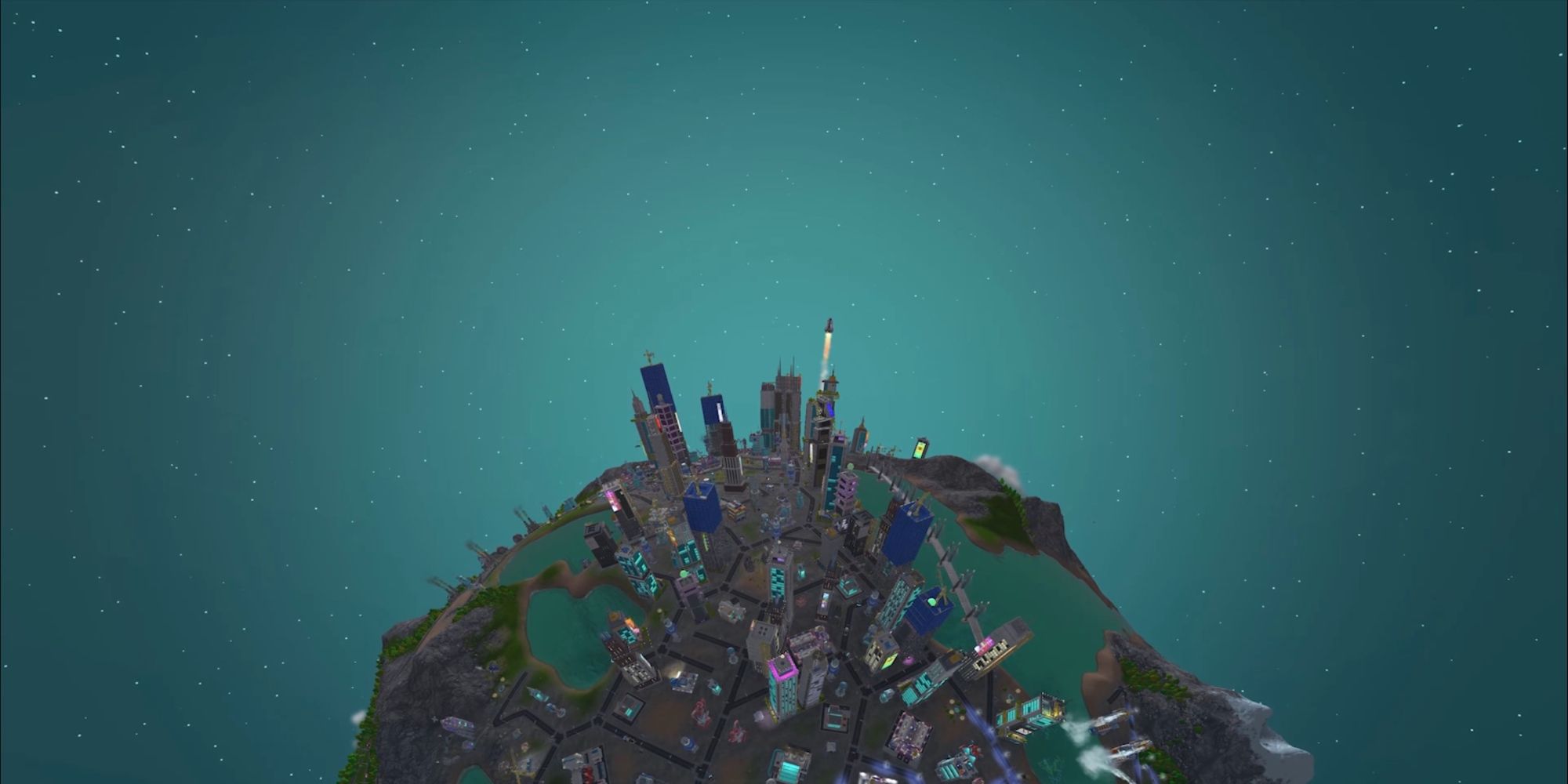 Crytivo’s goal with The Universim is to bring the God game back to its roots while keeping it modern. As a god, you will guide a civilization from its beginnings and watch them evolve as they advance with your influence.

What is unique about this game is the built-in interconnected ecosystem where every action your creations do will affect the world they live in. Taking care of their world is integral to their survival, just like our world. Hunting can cause species to become extinct and high levels of pollution can raise the world’s temperature. 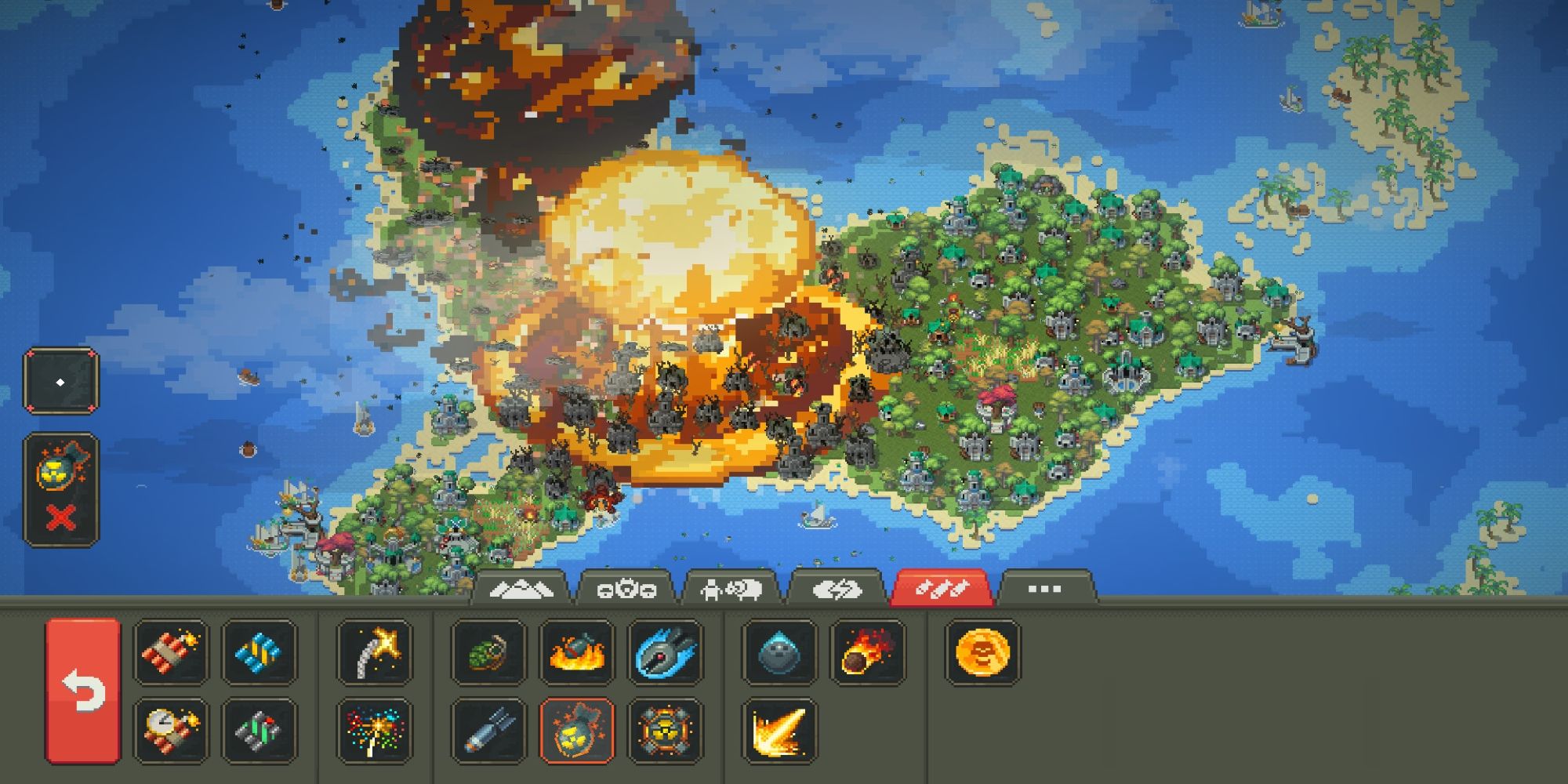 Create, watch, and interact with an entire living world. You can use destructive powers like lightning, acid rain, plague, and dragons to wreak destruction in your world. You can also release creatures like zombies, UFOs, and demons to do the destruction for you.

WorldBox features four different races, each with its own design and race traits. These races are humans, orcs, elves, and dwarves. If you ever wanted to create a world like the one in Lord of the Rings, this is the game for you! 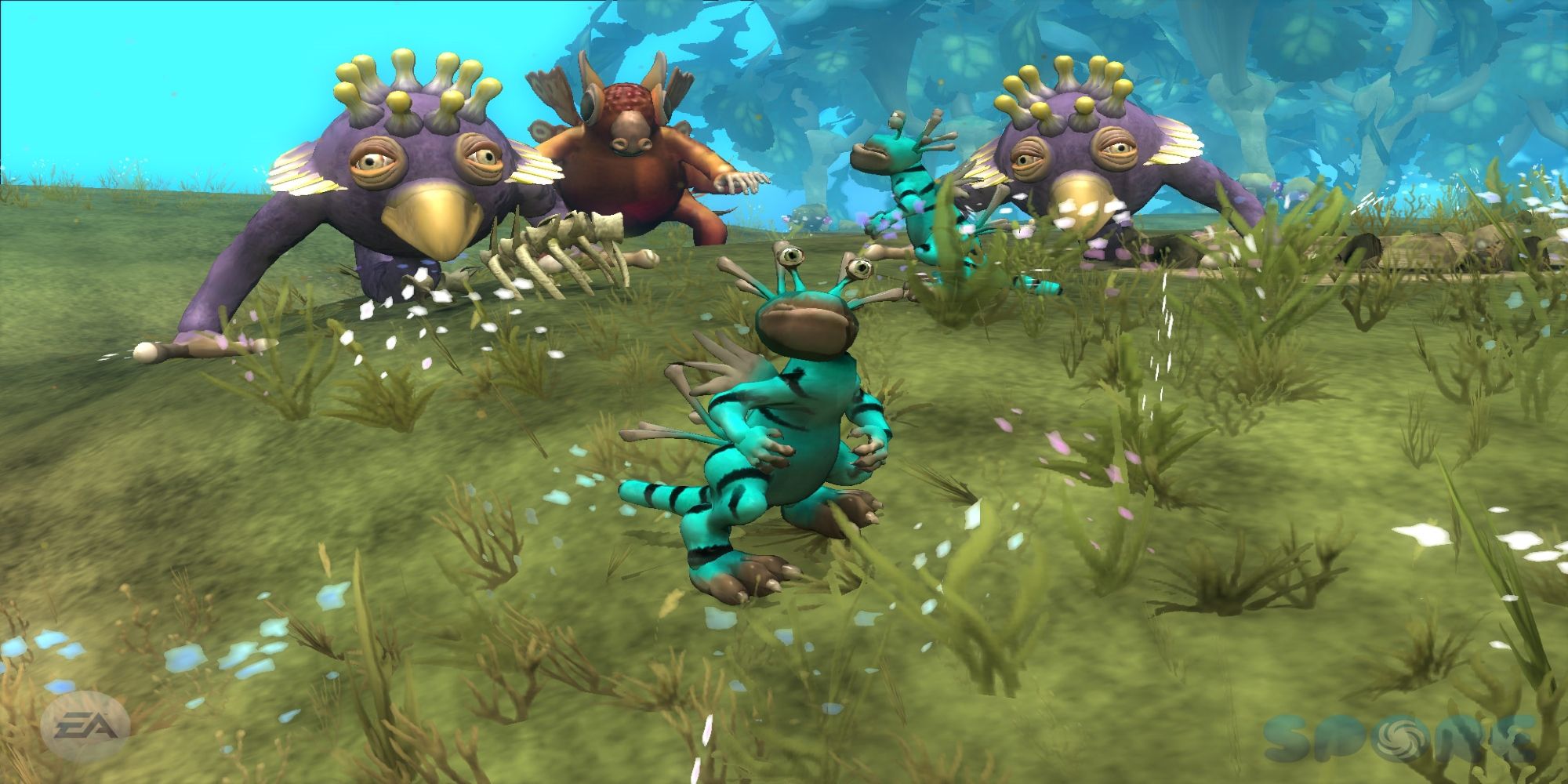 Spore is the last game visionary designer Will Wright developed before leaving Maxis. Create your civilization from single-cell organisms to galactic civilizations. There are two available options available to you in Spore. You can start with a single species or jump straight into creating entire species on new planets.

The game features creation tools that let you control every aspect of your creations. This includes the creatures, buildings, vehicles, and spaceships. Two additional DLCs are available, called Galactic Adventures and Creepy & Cute Parts Pack. 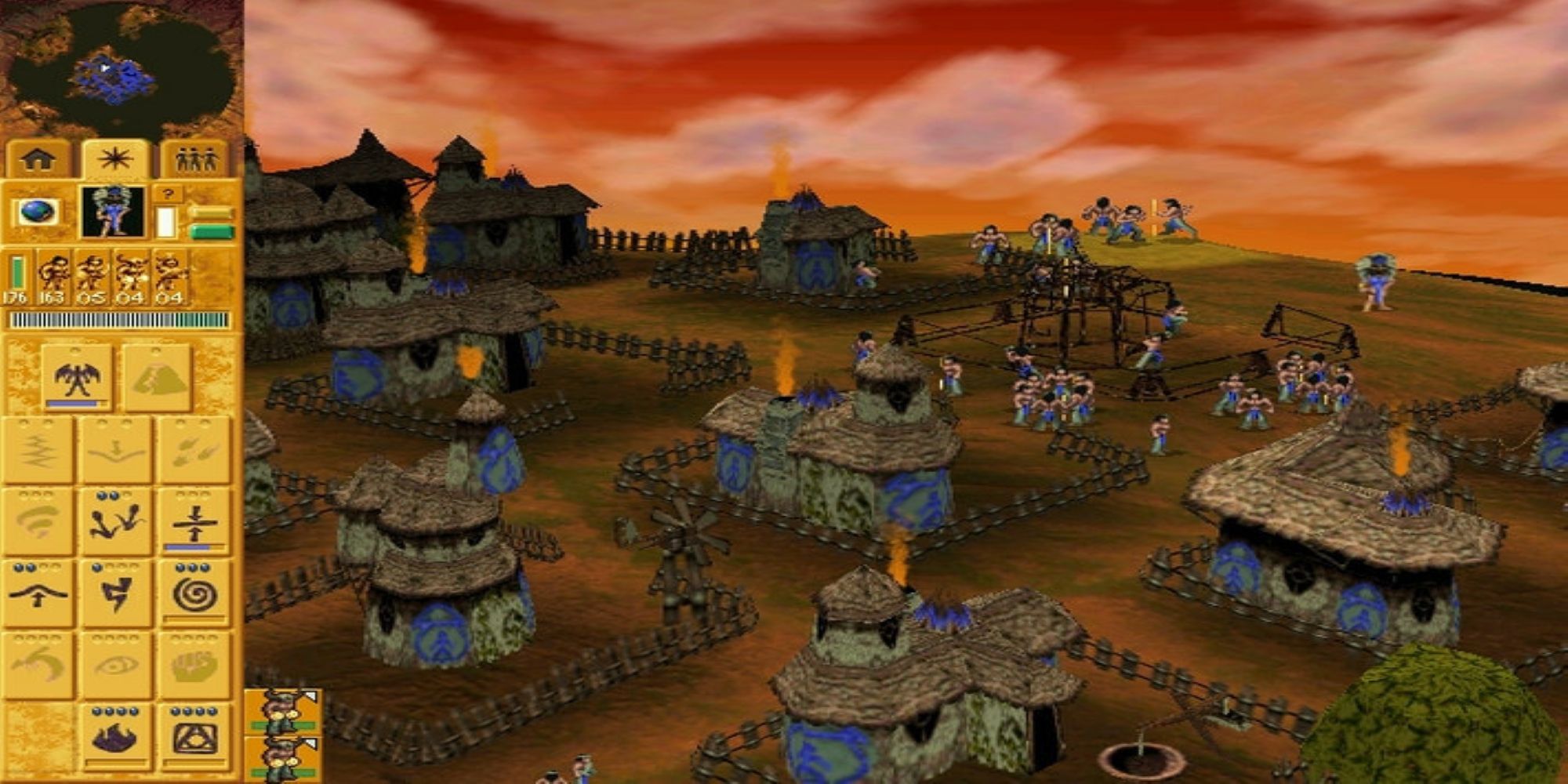 Populous: The Beginning is the third entry to the series and was the first to be fully 3D, which was groundbreaking for the time. You take on the role of a god whose goal is to lead your followers to victory by defeating other gods and their followers, conquer twenty-five planets, and ascend to the heavens as a God.

Assign tasks to your followers, like gathering, building, and attacking, to ensure they survive. Assist your followers in defeating your enemies by using powers like hurricanes, lightning, deadly swarms, and meteors. 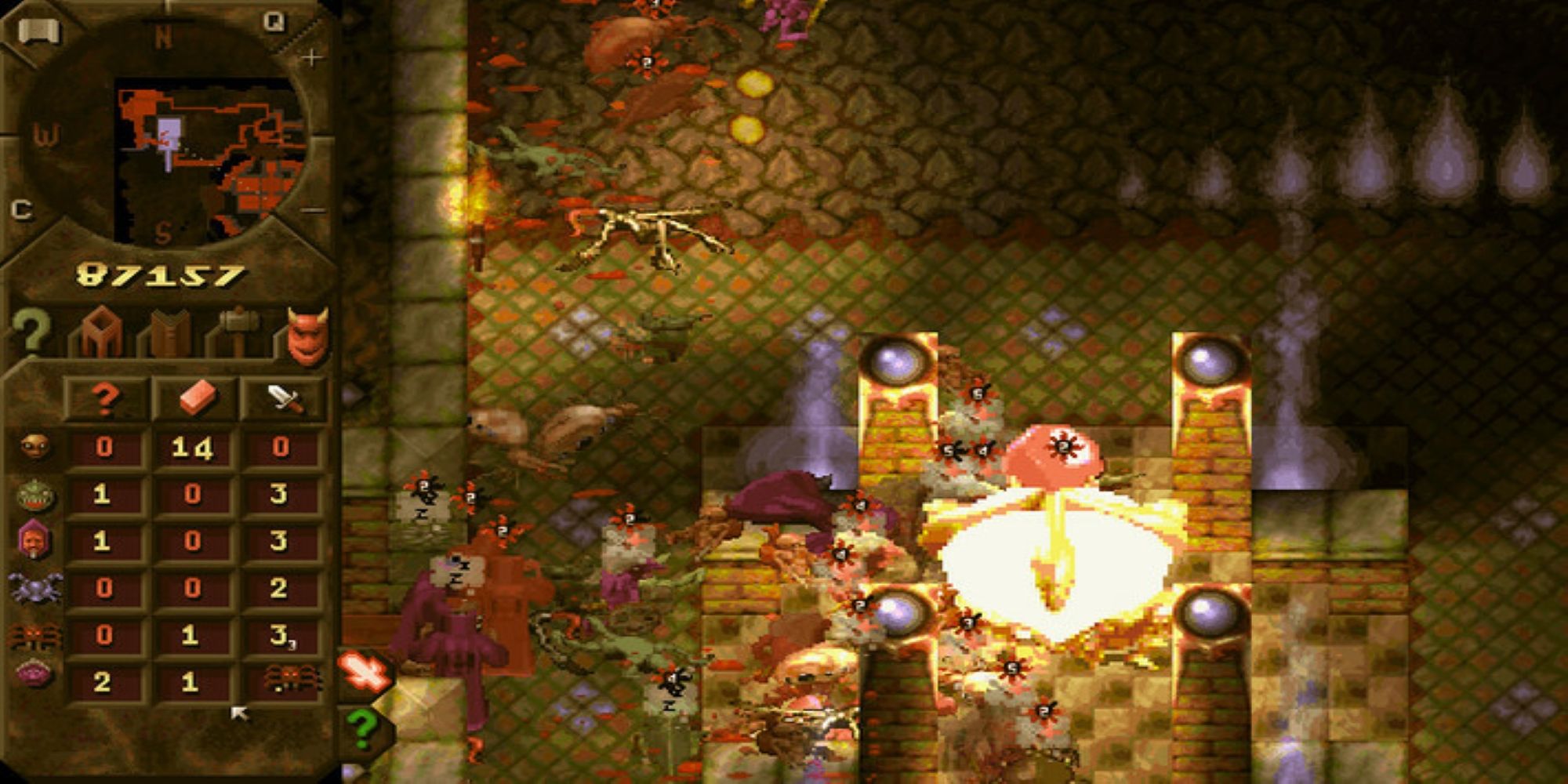 Take on the role of a dungeon keeper whose job is to bring in many nasty creatures to live in your dungeon. You will need to make sure you train, feed, and entertain them, so they are happy. Happy creatures are more than willing to fight for you and go up against the forces of good.

Recruiting and taking care of creatures is only half the battle. You can directly influence your dungeon by changing its layouts and building tunnels and caves to make the battle conditions favorable for your minions. 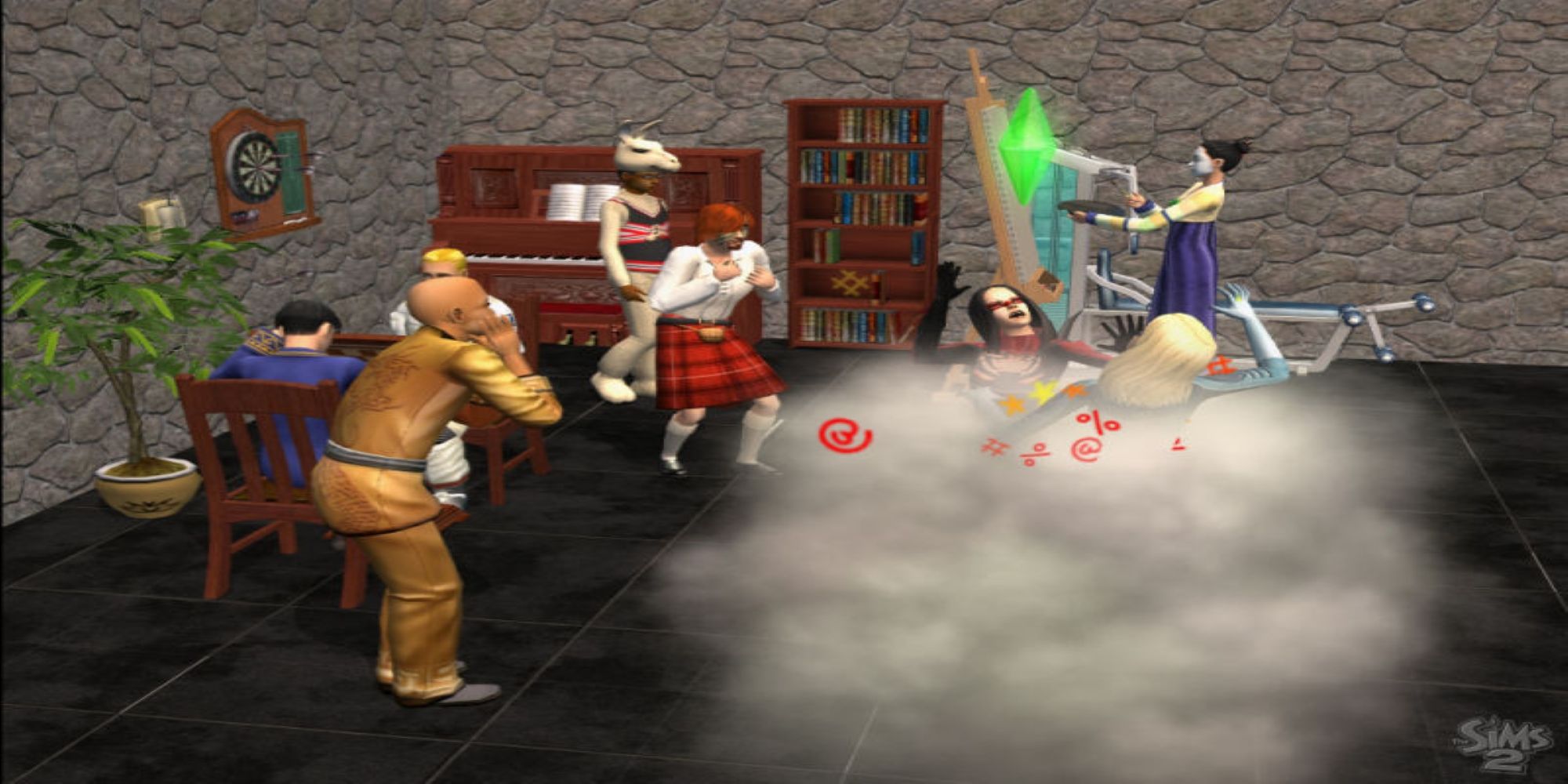 The Sims 2 allows you to direct the entire life of your in-game characters called Sims. Navigate them through different scenarios while attempting to achieve their goals. You have total control over all aspects of your Sims’ world. Your Sims will have their DNA passed down to future generations of Sims, making for unique characters.

A new feature to the game is the ability for your Sims to store memories and be aware of their world. They will react to other Sims based on previous interactions. The Sims 2 offers a split-screen, two-player mode where you and another player can take over the same neighborhood. 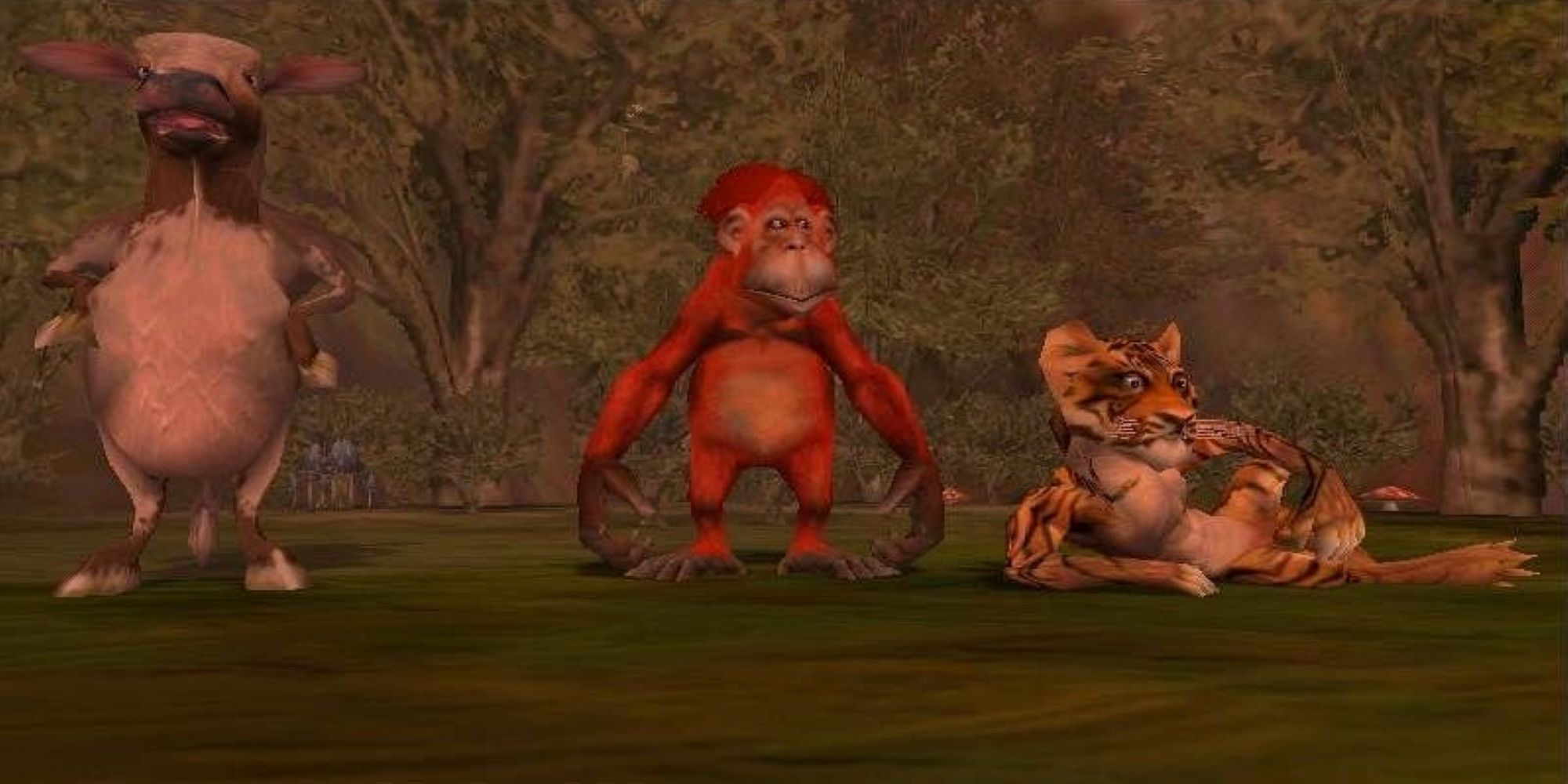 In Black & White, you play the role of a god who shapes the world and its inhabitants by gaining them as your followers. One of the more unique aspects of the game is being able to choose a pet that represents you as a god to your followers and who will destroy your enemies.

The developers of Black & White wanted to revolutionize the God Game genre by adding unique elements and mechanics to the game. They both accomplished and failed this goal, as these advanced features can cause frustration for some. Things like the slow pace of the game, advanced but buggy AI system, and your animal’s quirky behavior quickly removed the shine from this fantastic game. Regardless, this is one of the best entries into the God Game genre.