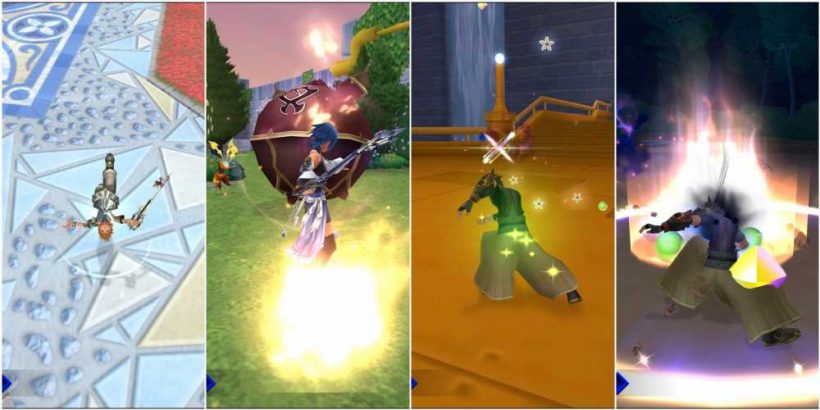 Kingdom Hearts: Birth By Sleep's central mechanic is the Command Deck, allowing for a vast array of ways in which you can defeat your enemies. Regardless of what you end up filling the deck with, you always work towards using a Finish Command, which is an especially powerful move that doesn't take up any slots in the Command Deck.

Instead, Finish Commands activate when the bar is full, and are as varied as they are destructive. Some can be used by all three of the protagonists, Terra, Aqua and Ventus, but others are exclusive to one of the three. It can take a bit of grinding to unlock the most powerful Commands, but they're worth it nonetheless. 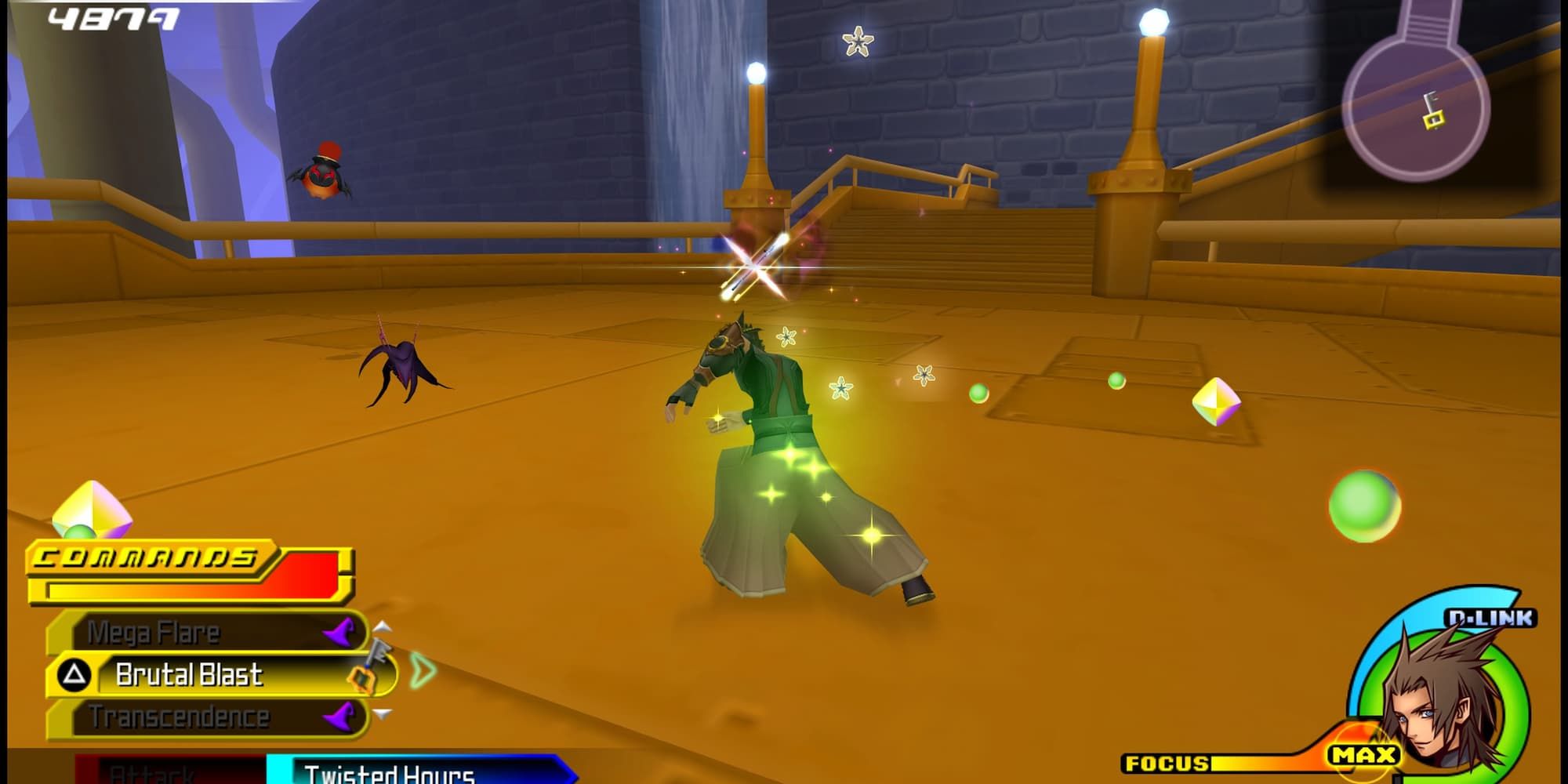 Twisted Hours is an enhanced version of the Strike Raid command, allowing you to throw the keyblade three times instead of just once. Each throw has a chance of inflicting Stop and Slow on enemies, and you don't take damage during its duration.

However, the timing between throws is a tad strict, so it's easy to accidentally waste your shots. At the same time, you can end the animation early by not pressing a button, which is useful if the first throw has already killed the last enemy. 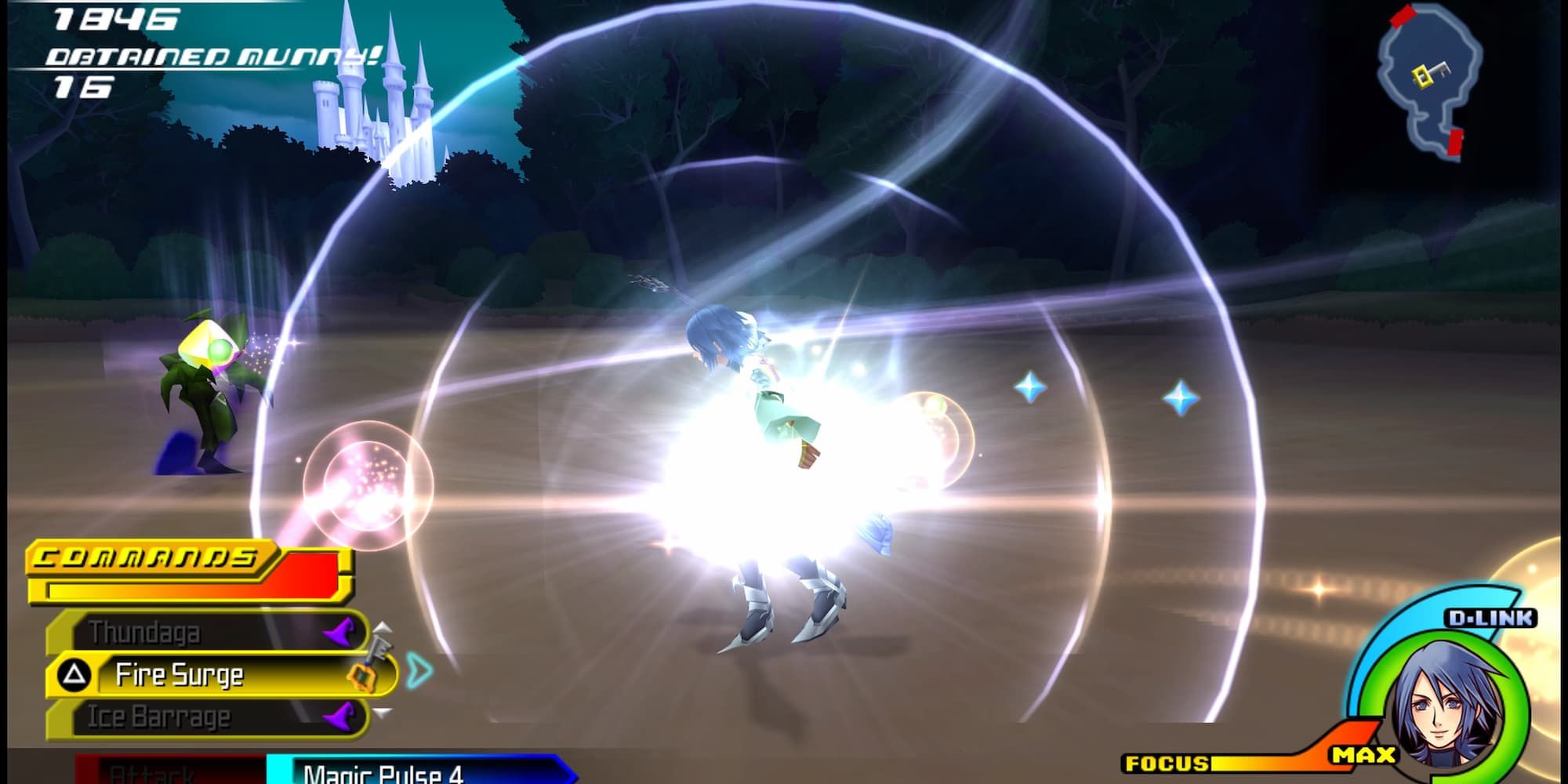 Magic Pulse causes Aqua to deal damage in a wide area, whilst also applying negative status effects to enemies such as confusion or freezing them.

Magic Pulse 4 is the strongest level of this Finish Command, and thus it has a far greater radius, effect variety, and damage output than the lower versions, especially since it deals three blasts of damage. It does require that you perform a QTE for each blast of damage, but thankfully it's rather lenient. 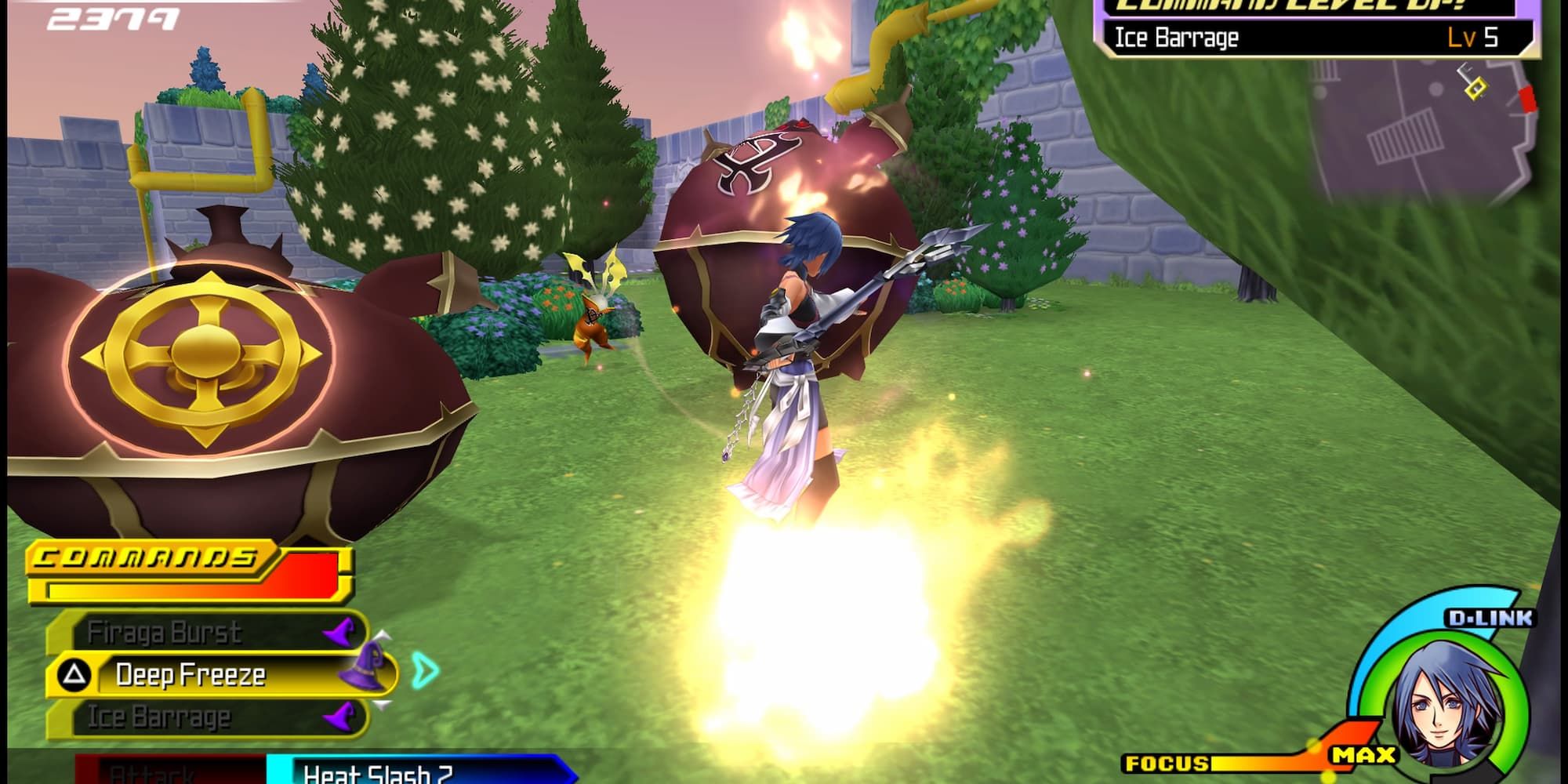 Heat Slash 2 causes Aqua to strike the ground in front of her and follow it up with a spin attack. Both attacks wreath her in flame, causing strong fire damage to opponents. You have to time the second attack correctly with the prompt, and it can be a bit tight, especially during the heat of battle.

Perhaps the best feature about this command is that it's only a Level 3 Finish Command, and unlocking it only requires that you use Firestorm 12 times with Heat Slash 1 equipped. 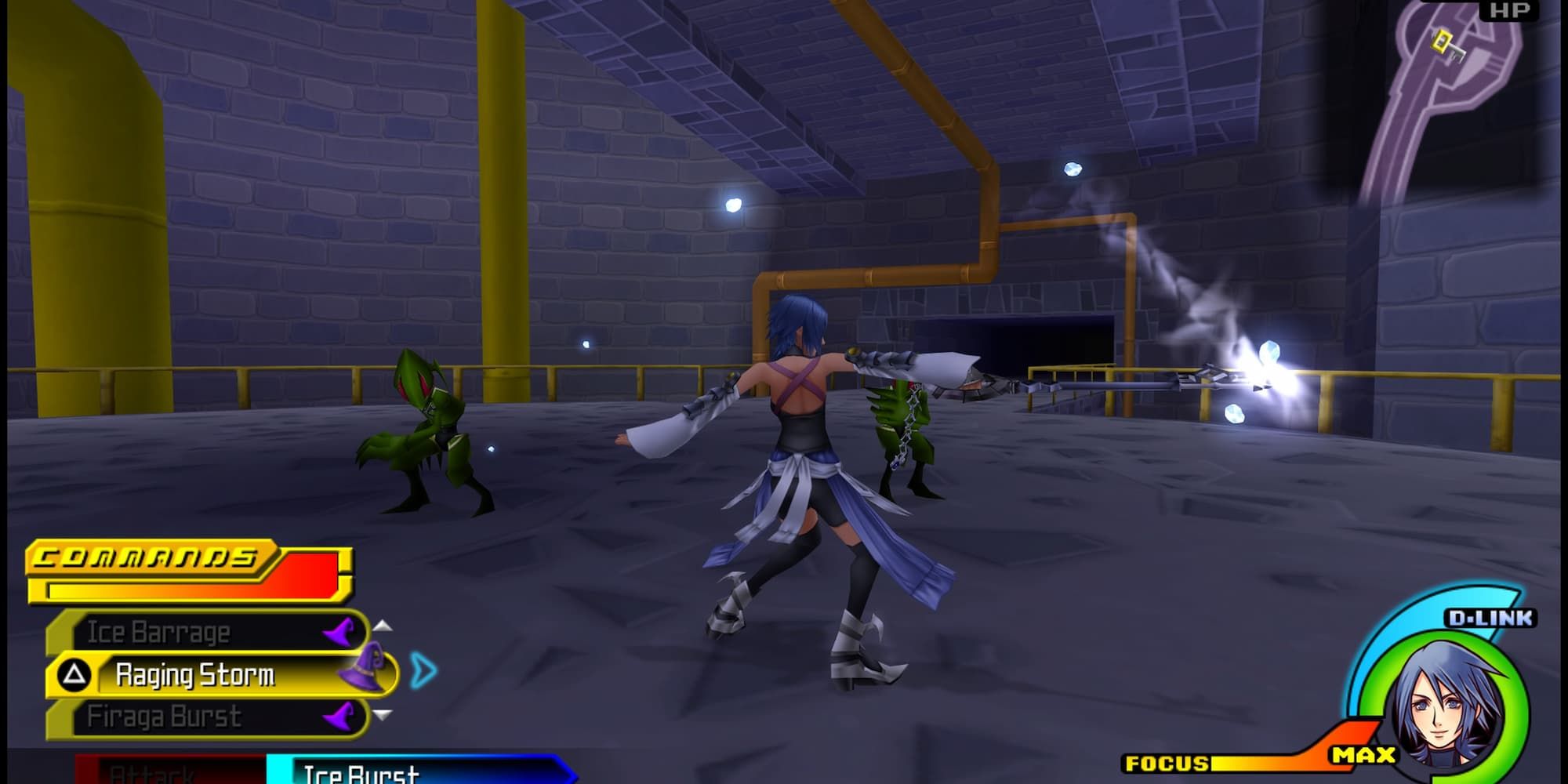 Ice Burst acts similarly to the various Blizzard spells, since it causes Aqua to fire three shots of ice towards an enemy after an initial spin attack. Thankfully, you don't need to time any button presses for the ice shots because they happen automatically.

The unlock requirements are also fairly simple, since you just need to equip Magic Pulse 3 and use Diamond Dust 15 times. In fact, it's possible to unlock Ice Burst in as few as two rooms, depending on how many enemies you face in them. 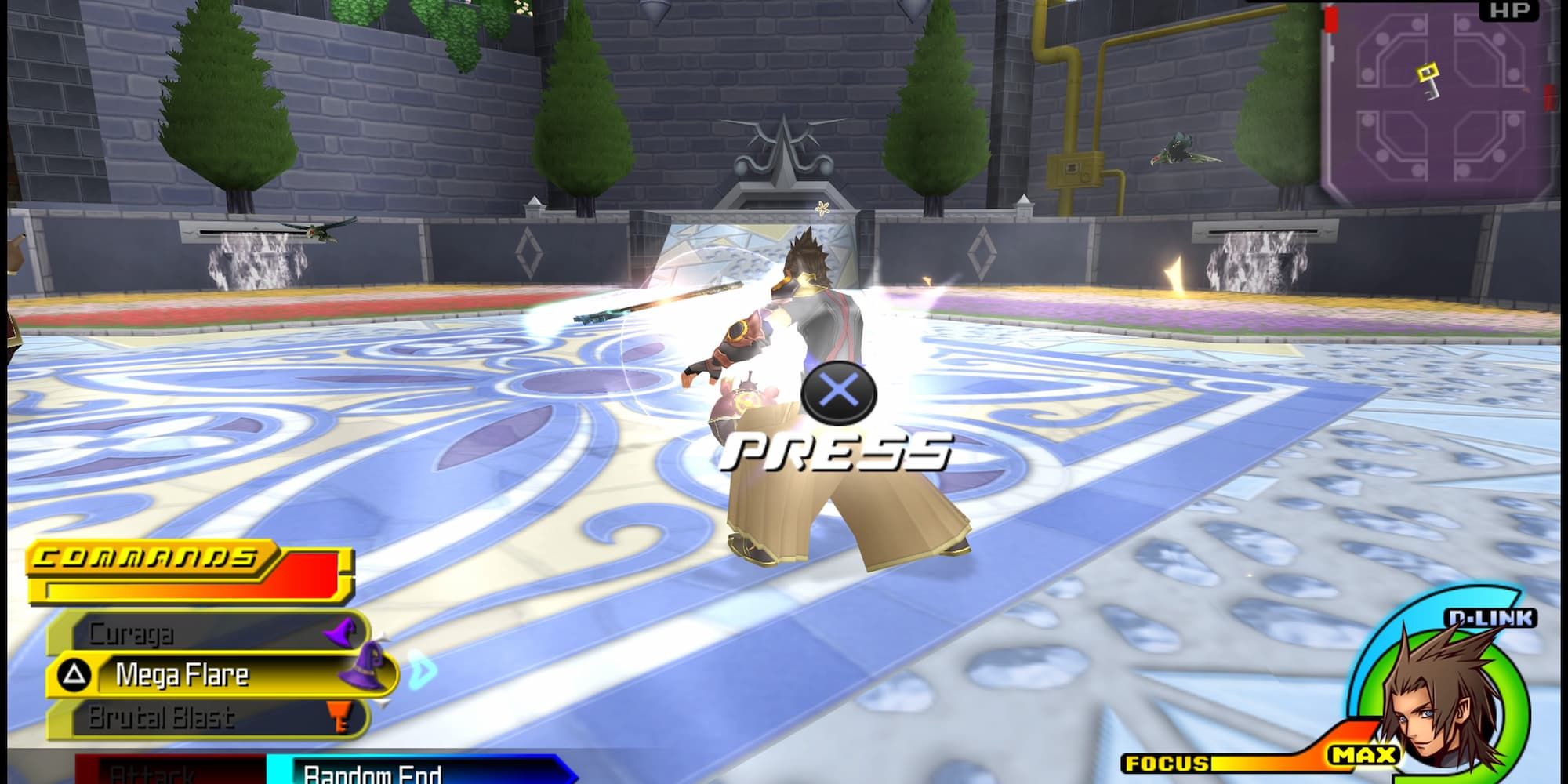 As per its name, Random End acts as a combination of various Attack Commands. As long as you succeed on the button presses, Terra will do a long chain of random attacks, such as dashing towards an enemy, throwing the keyblade at them, or doing a jump attack.

Also, each time you damage an enemy, there's a chance you'll give them a negative status effect. Unlocking Random End is a surprisingly easy process; all you just need to do is walk 8000 steps with Twisted Hours equipped. 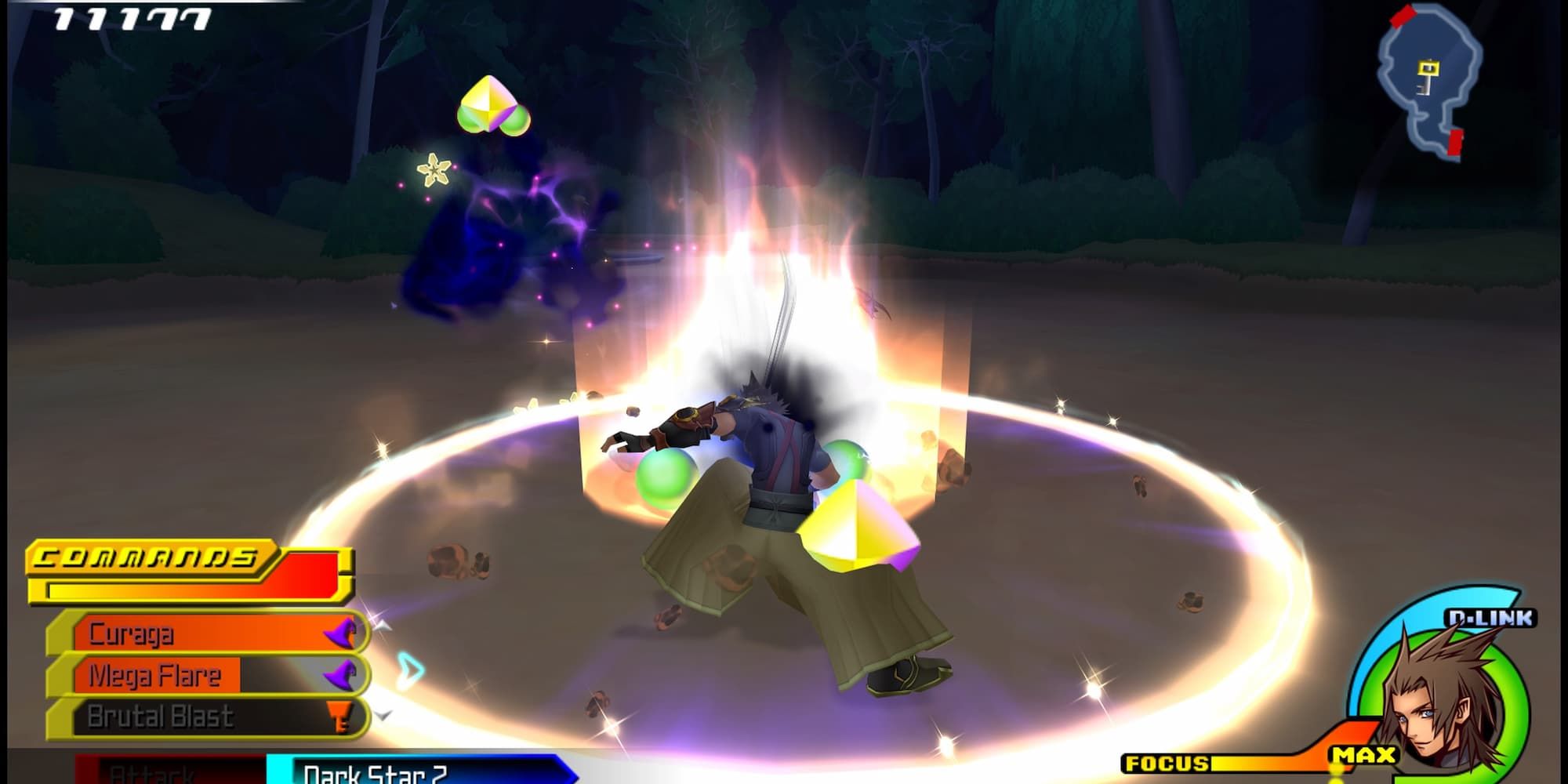 Dark Star 1 is already an excellent Finish Command for Terra, so it should come as little surprise that Dark Star 2 manages to improve upon it even further. When activated, Terra will do a spin attack and summon three meteors instead of Dark Star 1's single meteor.

As can be imagined, these meteors do a lot of damage to enemies, and there's also a chance that they'll blind or stun any survivors, leaving you with the perfect opportunity to finish them off after the animation has finished. 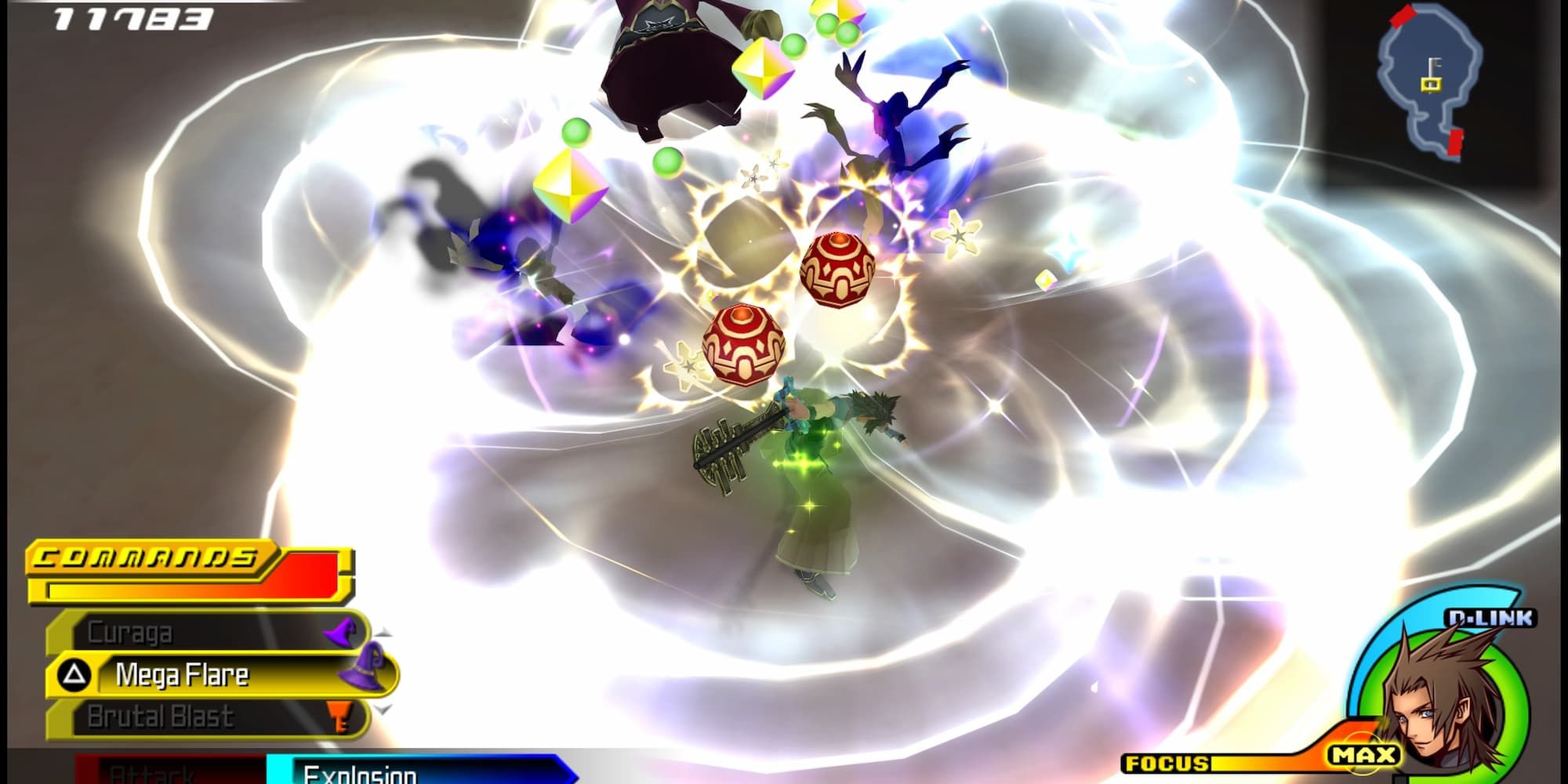 Exactly what it sounds like, Explosion causes you to jump into the air and slam into the ground, which unleashes an enormous detonation in the process. It deals heavy damage to enemies and stuns any that somehow survive. You're also invulnerable whilst the animation occurs, so you can't be knocked out of it.

Explosion itself acts rather similarly to the Mega Flare spell, albeit with slightly less range and a lower damage output to balance out the lack of a recharge period and the damage is still very strong regardless. 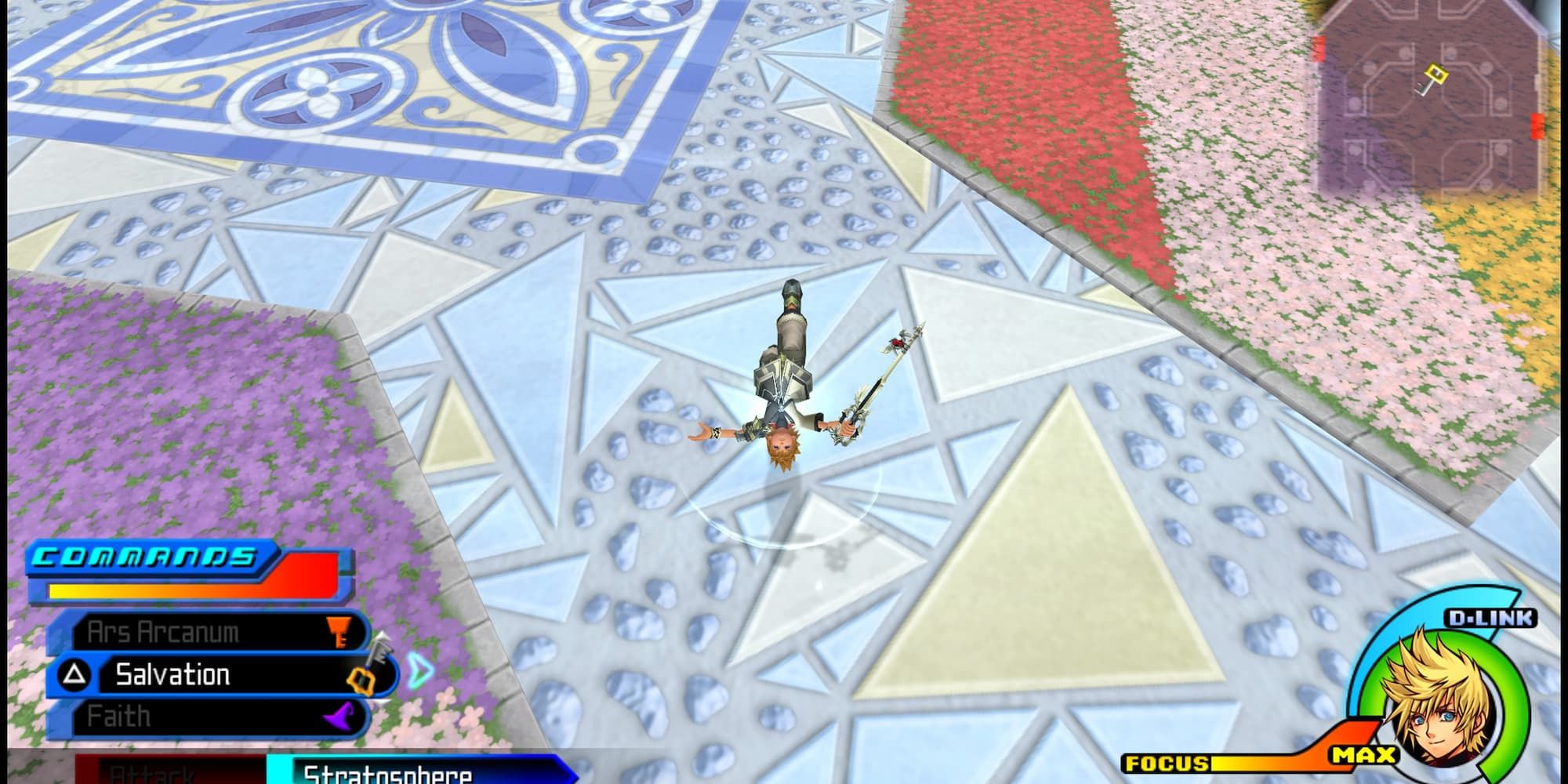 Stratosphere is Ventus' strongest Finish Command, causing you to launch into the air and do a series of dive attacks towards enemies, so long as you press the buttons when prompted. Aqua and Terra can use a similar finisher called Air Dive via Ventus' D-Link Command, but only once they've maxed it out.

The ability to strike airborne targets makes Stratosphere one of the most useful Commands in the whole game, especially since the various flying Unversed tend to be amongst the most annoying to fight in the whole game. 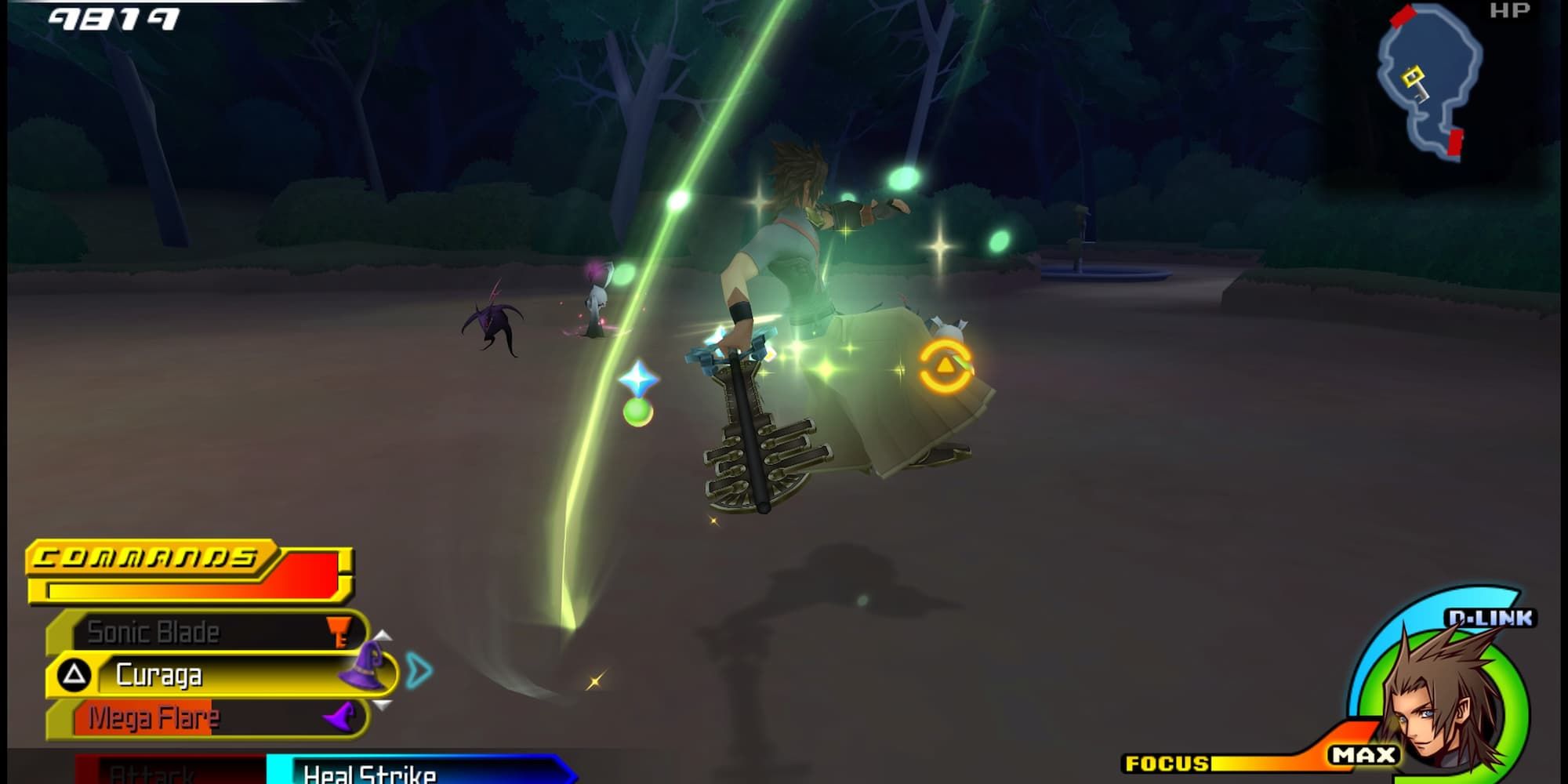 Heal Strike requires you to press the attack button three times during its animation, causing you to charge forwards and then deal two spin attacks. As the name implies, this Finish Command can heal you, although this only applies to the spin attacks.

Fortunately, the attacks don't actually need to hit an enemy in order for the healing to happen. As such, Heal Strike is ideal for difficult boss fights or the Mirage Arena, especially if you're waiting for your other healing commands to recharge. 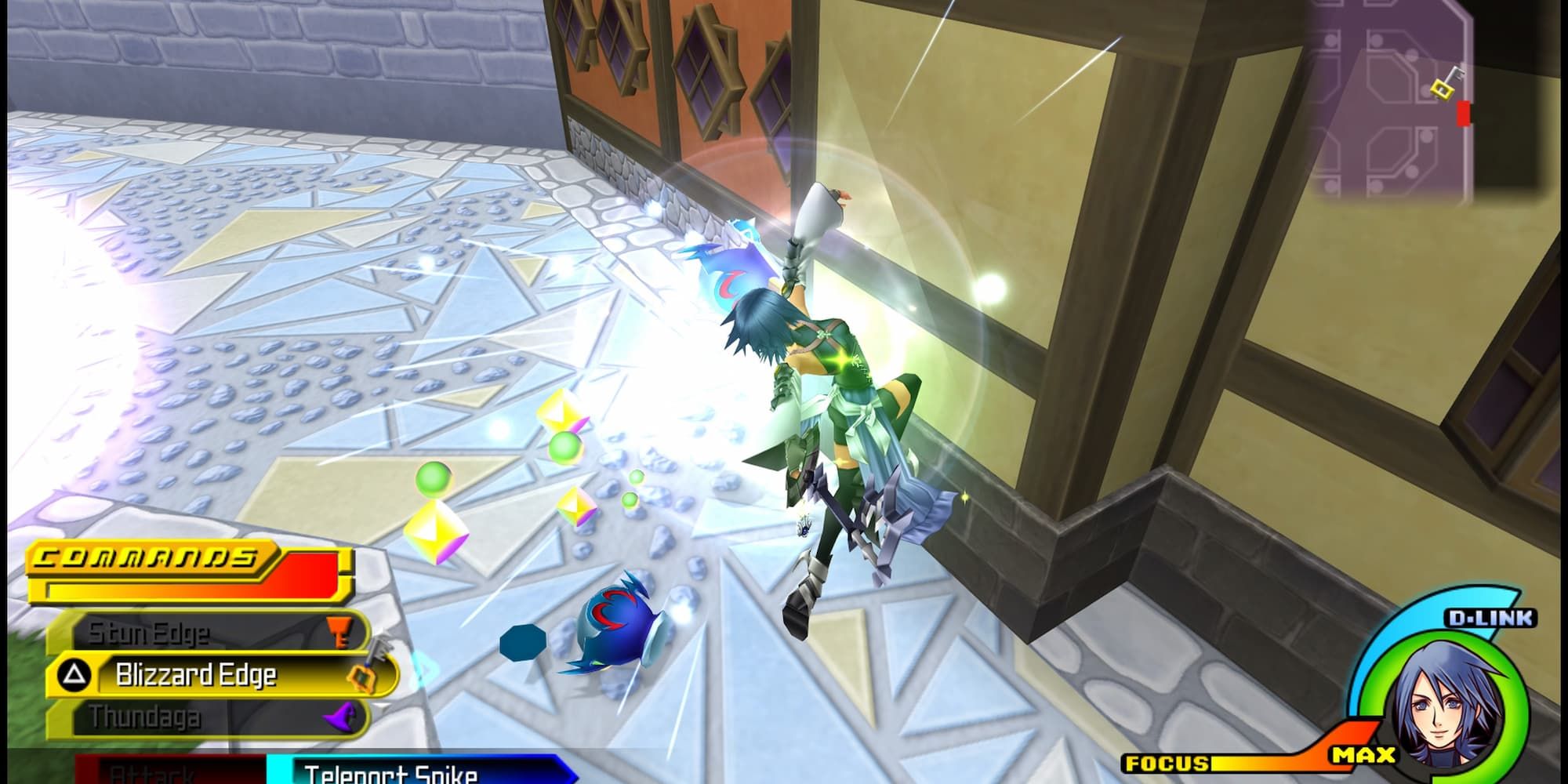 Teleport Spike (otherwise known as Teleport Blast) is Aqua's strongest Finish Command and arguably the best one in the game. She summons eight orbs in the air, then teleports up to them and strikes them towards her enemies, one at a time. This one Command can effectively clear an entire wave of enemies.

It takes a while to complete the animation, but you can choose to end it early by intentionally not striking the next orb in the chain. And best of all, you're invulnerable whilst the animation happens.