The four different realms include Ardenweald, Bastion, Maldraxxus, and Revendreth. Through the animated shorts, players will get to discover the journey that souls take after crossing the eternal veil as well. 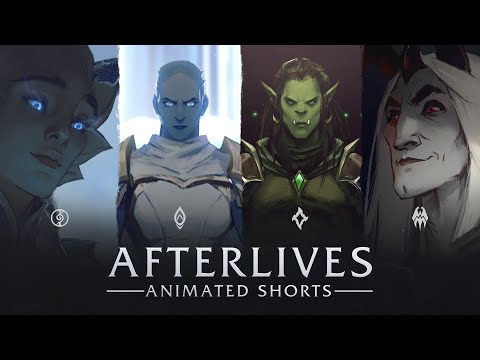 In the series trailer, Uther is seen together with Arthas on the battlefield. However, Arthas is not the only World of Warcraft character teased to appear in the animated series. For instance, what appears to be Garrosh Hellscream is seen in chains and facing punishment.

The image of the former Warchief of the Horde is reminiscent of the artwork of the War Crimes novel. The novel, written by Christie Golden, featured Garrosh’s trial in Pandaria. Well-known World of Warcraft characters from both the Horde and Alliance gathered during the trial period to debate and decide on what fate awaited the orc.

While Baine Bloodhoof had the role of defending Garrosh, Tyrande Whisperwind was on the opposing side. She went over the orc’s history and actions that lead him to his chains.

Meanwhile, characters such as Thrall, Jaina, Sylvanas, Anduin, and Wrathion had their own battles and roles to play within the novel. Ultimately, the ending of the book bridged World of Warcraft fans who quested during the Mists of Pandaria expansion to the Warlords of Draenor one.

Garrosh Hellscream on the cover of the War Crimes novel. Image provided by Blizzard Entertainment.

The new Afterlives series will premiere on August 27 at 2 PM ET. World of Warcraft players can watch the livestream over on YouTube, where the Gamescom: Opening Night Live 2020 event will take place along with other premieres. In the meantime, those interested in Shadowlands can pre-purchase the expansion over on the Blizzard website.

Resident Evil Village Might Come To PS4 And Xbox One, But “No Promises”