This weekend, the Duels of Runeterra community tournament expanded to include the Southeast Asia shard. The event was a combination of a new patch, that notably nerfed the aggro king of the meta, and a less-explored regional meta, which has traditionally been very interesting in other card games like Hearthstone.

After a 128-man Swiss and 16-man single elimination, Hearthstone veteran TheOzzy took the whole thing, beating SloggySlopster 2-1 in the finals, dropping just one game in his entire playoffs run. TheOzzy used a line-up of midrange and control decks, also showcasing one of the potential new Tier S decks in the Patch 1.2 meta — the Swain/Sejuani midrange. 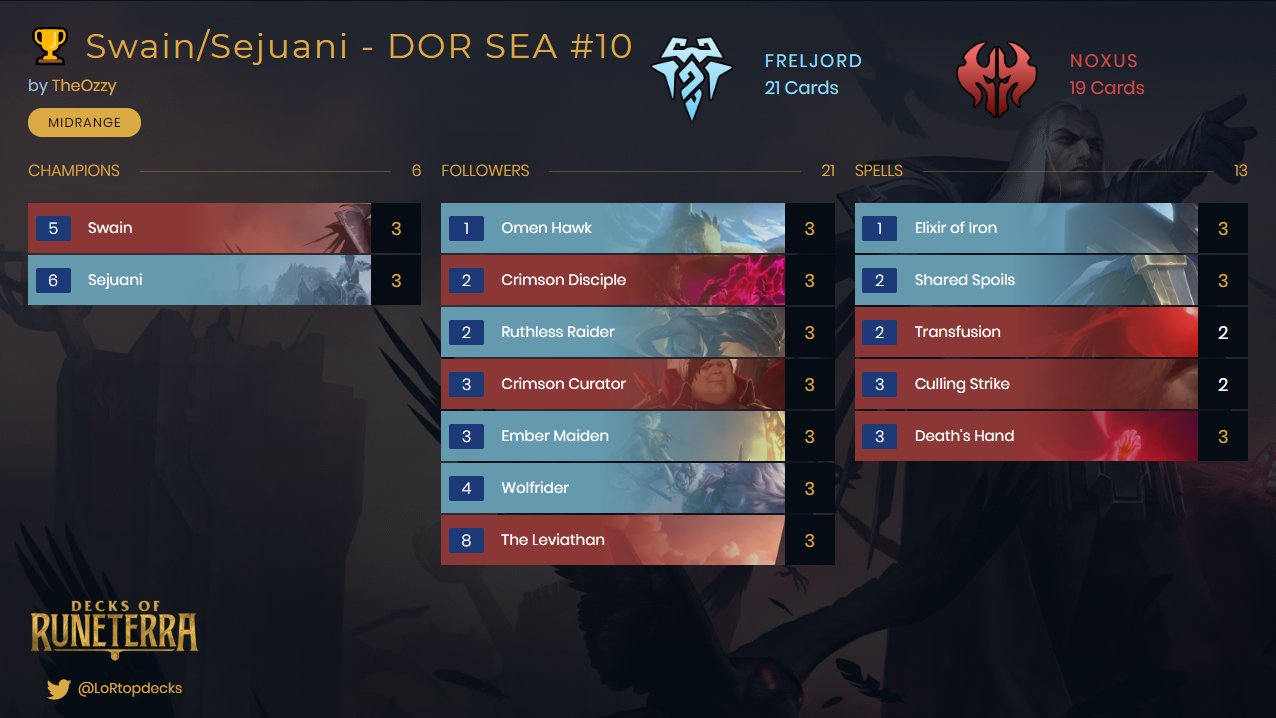 Swain/Sejuani is a fast midrange deck that is becoming more and more popular in Patch 1.2. In the early game, it aims to level up both Swain and Sejuani at the same time, by dealing chip Nexus damage and applying some early pressure through Ruthless Raider, Ember Maiden/Crimson Disciple, and Death’s Hand.

Once in the mid/late game, the deck aims to complete its stun-lock combo of Leviathan plus a leveled up Swain and Sejuani, decimating all defensive play from the opponent and just walking freely into the enemy Nexus. 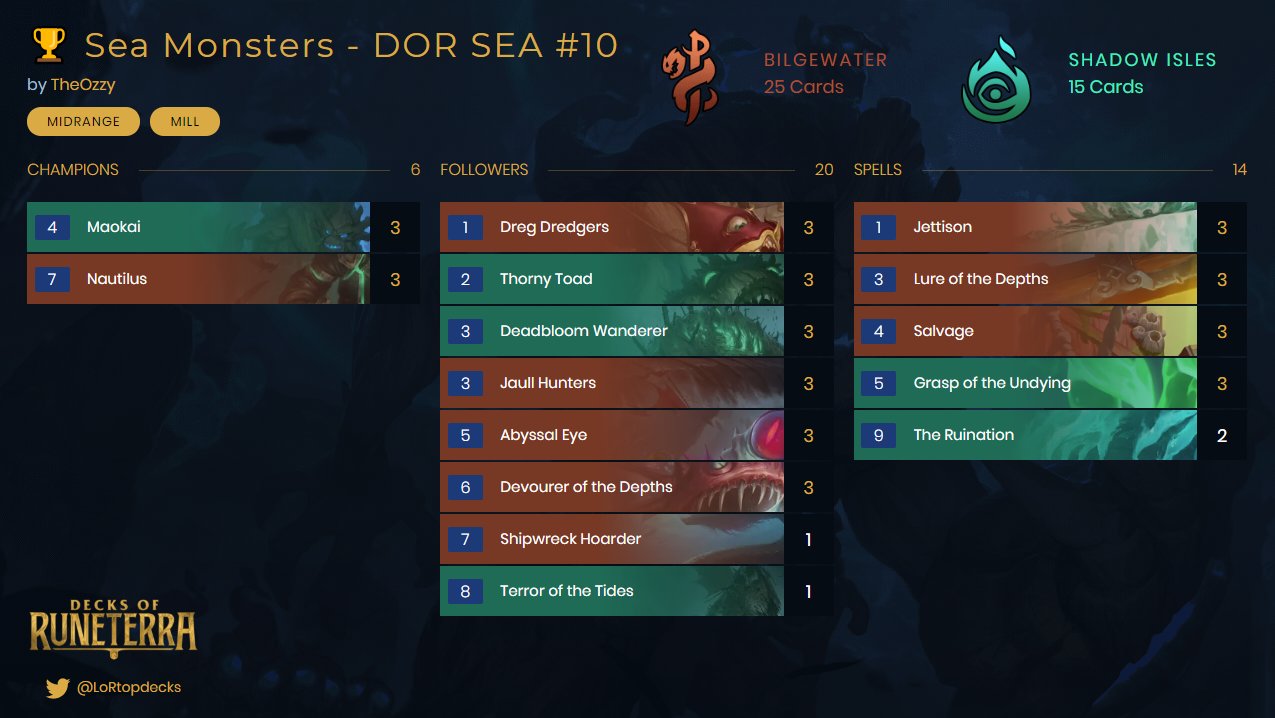 Sea Monsters is a familiar Rising Tides archetype, which didn’t change at all with Patch 1.2, preserving its midrange and late-game potency. The deck wants to go Deep (have 15 or fewer cards in the deck), when its Sea Monsters get +4/+4 and start packing a serious punch.

With Burn Aggro and Brood Awakening nerfed, TheOzzy has cut Withering Wail, which was present in most Sea Monsters list before the patch, and keeps Grasp of the Undying and 2x Ruination as his board clear tools, but his followers line-up has remained more or less standard. 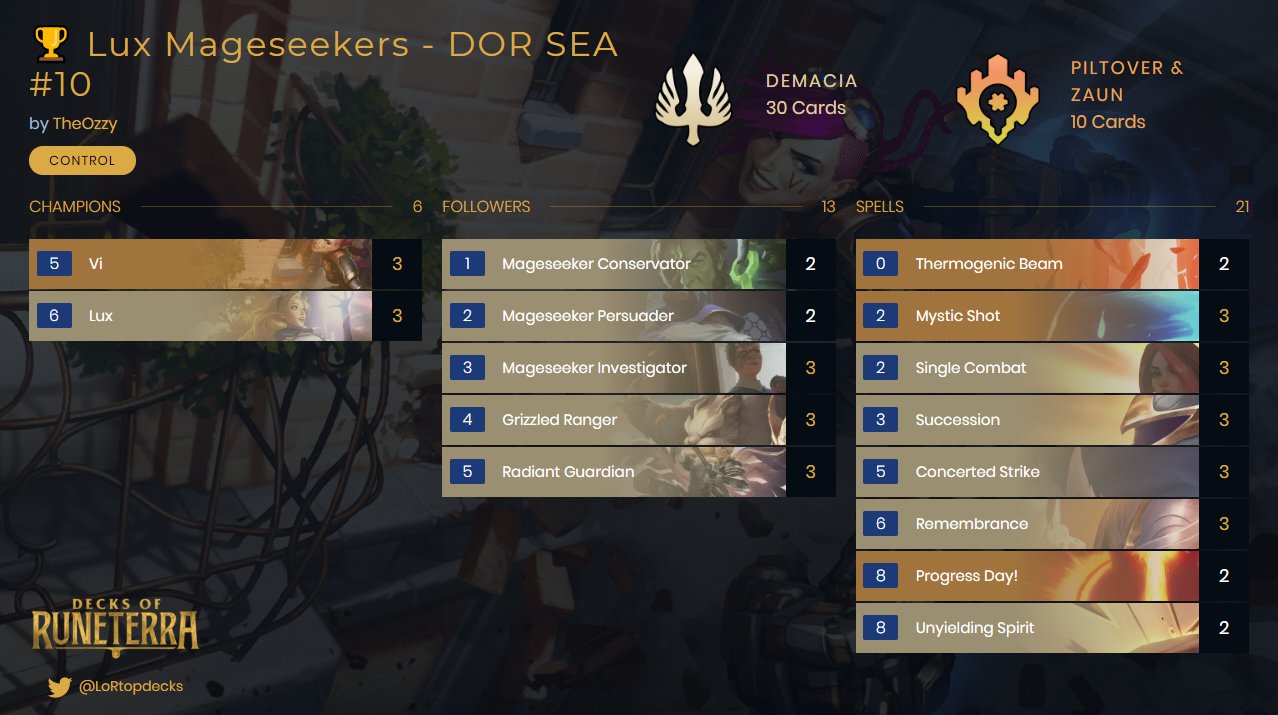 Lux Mageseekers is an older archetype, which rose to prominence with the rework of all Mageseekers, but it quickly fell out of favor when other, stronger control decks emerged.

Now, the deck seems to be back in power. Despite the slight nerf to Vi in Patch 1.2, she still makes great company to Lux, helping the deck survive till the late game where it takes over the game fully by generating endless amount of removal in the form of free Final Sparks or Detains from Mageseeker Investigator.

Disclaimer: The author of this article is associated with the Duels of Runeterra tournaments.