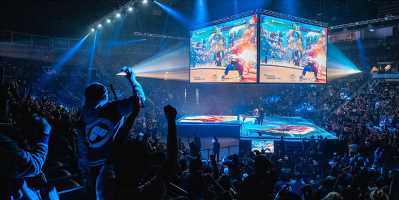 At the Evolution Championship Series in 2017, Japanese fighting game legend Hajime “Tokido” Taniguchi claimed his first ever Evo victory, upsetting Victor “Punk” Woodley, the heavy favorite to win the Street Fighter V event. Evo is critical to a player’s legacy in fighting games, and while Taniguchi was already undisputed as one of the best all-around fighting game players, that Street Fighter Evo championship had eluded him for years. As he claimed victory, the audience cheered not only for the culmination of an incredible weekend of competition, but for the achievement earned by a player who truly deserved the recognition that comes with such a prestigious win.

After striking a pose for the audience and reclaiming his emotions, a microphone was placed in front of Taniguchi so that he could address the emotional crowd. Esports interviews are always something of a challenge, particularly when English is not the player’s first language, but the crowd grew silent to listen to their champion. “Just one thing I want to say,” he began. “Fighting game … is something so great.” The audience, interviewer, and commentators broke down in that moment. They understood the core of Taniguchi’s message as one of the great truths of esports — fighting games are great.

If you’re not a fighting game fan, it’s difficult to describe just how special this corner of the esports industry is. The storylines that play out between fascinating characters over a weekend of Marvel vs Capcom or Guilty Gear action are like nothing else in this space. The emotion with which commentators proselytize for the games they love I have not seen replicated in any other esports broadcast. From a fan perspective, I would argue there is nothing better than investing yourself in the loser’s bracket run of a beloved fighting game underdog and watching them risk everything on a raw uppercut to dethrone a champion.

Unfortunately, some of that same passion, combined with slow, fumbled, or simply a lack of support from developers has left the Fighting Game Community behind its peers as the esports industry has grown. Viewership for big events is certainly there, engagement levels for the brands who understand the space is unparalleled, but it remains a very entrenched, tradition-focused community that is difficult for anyone to penetrate from the outside — even if that person or company wants to inject much-needed capital into the space.

Some of this resistance to the modernization of esports is for good reason. If someone tried to replicate the Overwatch League in fighting games, it would remove everything that makes the FGC so special. The FGC is at its best for fans and brands when it is raw, grassroots, and fueled by passion. It’s just very difficult to create brand deals with big non-endemics or bring in major investment capital while also protecting that atmosphere.

This is why I am personally so excited about the acquisition of Evo by Sony Interactive Entertainment and RTS. The fighting game space needs more resources, it deserves to be discussed in business circles right alongside Rocket League or Rainbow Six Siege. The value is there for brands and investors if they are willing to learn how to enter the space the right way – to treat authenticity as more than just a buzzword.

While it is still early days and we have yet to see what an in-person Evo looks like under the new ownership, the early signs indicate that Sony and RTS are entering the fighting game space the right way. They are providing much-needed resources and business structure to an important pillar of the space, but allowing the people who understand that space to make it an authentic FGC experience.

Rather than coming in and turning Evo into a promotional PlayStation event, Evo staff immediately took to social media to make it clear other platforms and all titles would still be considered for inclusion in the event. By all accounts at this stage, the core of what makes Evo special isn’t going away, but the opportunity to sell sponsorships for the event, to effectively network and put the brand in front of new people (with money to spend) is so much greater.

Evo is the best, and perhaps only tournament that could have pushed the FGC forward in this way. It was already the biggest event in the space, and the closest to a “corporatized” tournament due to the more active involvement of publishers, sponsor interest, and simply its sheer scale compared to other events. However, there are plenty of other tournaments that can provide similar value and arguably have even greater growth potential. SIE and RTS recognize not only the value of the FGC, but of owning a first-party event in the space post-pandemic.

Fighting games will explode in 2022 like never before. No one is ready for just how much growth the scene will see. The combination of so much pent up demand for live events and huge new releases (remember how Riot Games is making a fighting game that will make a major lasting impact on the space even if it’s only like a 7/10?) means that those who properly entrench themselves in this space during one of its lowest moments will have the potential to reap major returns in the coming years.

Any FGC fan knows how special this part of esports is, and just how criminally slept on it has been by the industry as a whole. There’s plenty of blame to go around for that, but Sony has planted a flag showing every other entity monitoring esports that this is a space worth understand, engaging with, and ultimately investing into.