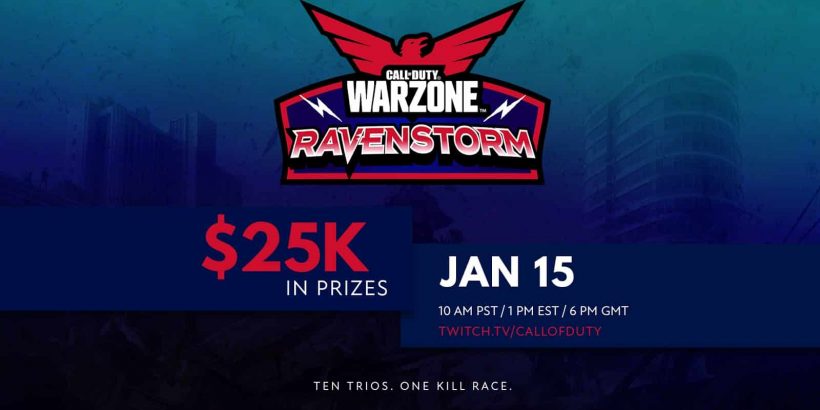 The Royal Ravens will be the first team to host a Warzone tournament in 2021 with the Ravenstorm.

Call of Duty fans were gifted with numerous Warzone tournaments through December, however, we are yet to see one in the new year. Well, the London Royal Ravens have heard us and will be hosting a $25K Warzone tournament titled “Ravenstorm”. Here’s everything you need to know.

Unfortunately, the Royal Ravens are yet to confirm the format of their Warzone tournament. However, with only 10 teams competing, we expect this to be a Public Match Kill Race. This means that teams of three or four will jump into Warzone public matches and earn points for kills and placement. They will play for a period of time, with their highest three or four games counting towards their final score.

As with the format, the Teams are yet to be announced. However, as it’s hosted by the London Royal Ravens, we expect to see their Call of Duty League roster of Seany, Dylan, Alexx and Zer0 to compete. Along with them, we expect to see some of London’s content creators such as Jukeyz, along with Royal Ravens co-owner, Vikkstar.

Schedule and How to Watch

The Ravenstorm $25K Warzone tournament kicks off at 1 PM ET on January 15. You can watch on Call of Duty’s Twitch Channel, but your favorite competitor will also stream their POV.