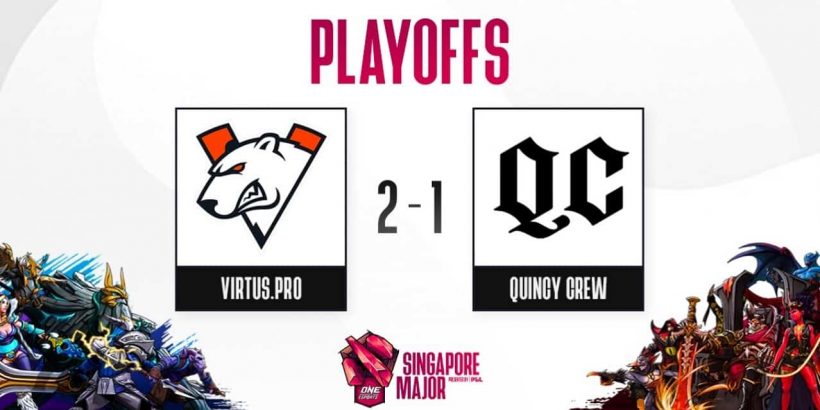 The Lower Bracket games are underway. Giving teams an opportunity to get back in a sound position in the major. ESTNN looks at the matches in round 1 of the series.

After a dramatic day of Upper Bracket games, the losing teams in the Lower Bracket are now fighting to stay in the competition. The Playoff games included Fnatic, OB Esports x Neon, Vici Gaming, Team Liquid, Team Aster, Thunder Predator, Quincy Crew and Virtus.pro. We take you through all the highlights — game by game.

Fnatic vs Neon Esports had a cracker first game with both teams picking early game brawling lineups. Fnatic had the upper hand in the early game with heroes like Lycan and Monkey King, but Neon were never far from being level. After the 20-minute mark, Neon started leading the race for gold and were heading back into the game. After major teamfights, the winning advantage kept swinging between both teams. A chase from Neon after Fntaic’s Monkey King near the river seemed like the final fight before Fnatic’s fall. With cores from Fnatic dead with no buyback, Neon won the first game.

The second was a revenge by Fnatic, where they stomped Neon under 30 minutes. Neon could not stop Alchemist from farming and Fnatic along with Void Spirit and Centaur completely dominated the game.

The third and final game had Fnatic’s Raven in absolute despair. After picking Wraith King, Raven did not get any space to breathe from Neon. Constantly ganking and killing Fnatic’s carry, Neon had enough space and farm to finish the game with their push heavy lineup including heroes like Death Prophet and Leshrac.

Despite some early game flair play from Liquid, Vici had a decent farm on their core Juggernaut. It was around the 20-minute mark everyone noticed how well equipped Vici were after displaying their strength in a small teamfight. It looked like Vici had kept Alchemist as the sacrificial goat while giving all the space to their carry Juggernaut. Even after some sheer dominance from Qojqva’s Razor on Alchemist, Vici still had enough juice to fight with Storm Spirit and Juggernaut and win.

The second game saw Liquid picking a lot of AOE(Area OF Effect) damage heroes like Enigma, Puck and Sven. However, because of high cooldowns on Enigma, Vici could force fights outside Liquid’s comfort zone. The early game score was in favor of Vici, but Liquid had gold advantage thanks to their Sven and Storm.

The match turned to Vici’s advantage when Liquid tried to force a fight near their bottom tier-2 tower. Trapped inside Monkey King’s Wukong’s Command, Liquid’s Sven, Tiny and Enigma died with very little to take. Most teamfights in the game resulted in Liquid’s cores dying early, while Vici survived long enough to take objectives. With lack of proper team fights, Liquid lost the second game.

The fact that Aster could not dominate Thunder, even after picking an early game draft against an Anti Mage, had put things in a strange spot for their team. Unable to close the game early, Aster’s dependence on Troll Warlord and Storm Spirit did not pay off. Picking up an Aegis on AM, around the 40-minute mark, Thunder sieged high ground and won the game.

The second game had a balanced start, with both teams looking to take an advantageous fight. Although Aster took an early Aegis with their Troll Warlord, the team fights they took following that were not great. Losing the Roshan advantage around the 20-minute mark, Aster fell back in gold and level advantage. Aster seemed clueless after Troll’s ultimate usage, whereas Thunder kept picking off heroes with Tusk and Lina duo. Thunder kept getting stronger and ended the game around the 33-minute mark.

The first game between Virtus.pro vs Quincy Crew saw CCnC pick core IO with Yawar on Monkey King. QC had picked Morphling, which is a great against VP’s Venomlancer. The first ten minutes of the game was very passive, with not a lot to separate the two. However, at the 16-minute mark VP smoked to take a fight on QC’s side. As the fight broke, things went south for VP, with both Bounty Hunter and Lion getting obliterated by MK’s damage. QC also caught Morphling in the fight, which proved to be huge for them. Unable to find an answer VP kept getting pushed back and eventually lost to a strong QC side.

The second game was revenge time for VP, and they did exactly that. VP got dominated in the early game and QC tried their best to stop Alchemist from farming. However, VP started turning the flow of the game after the 10-minute mark. Oracle’s saves on VP were on-point in keeping the important heroes alive during fights, and so was the overall team synergy from the CIS stars. After the 20-minute mark, VP were too powerful to close down and won the game.

The third and deciding game started with lots of little skirmishes from both teams. Later, around the 18-minute mark, QC looked to take the Aegis for their Troll Warlord but were interrupted by VP who couldn’t pick up the Aegis but could team wipe QC without it. The gold difference between both teams was not much yet VP were dominating QC. It was only near the 30-minute mark that VP got significantly stronger and could go high ground. After a few frail attempts from QC, VP pushed high ground and won.