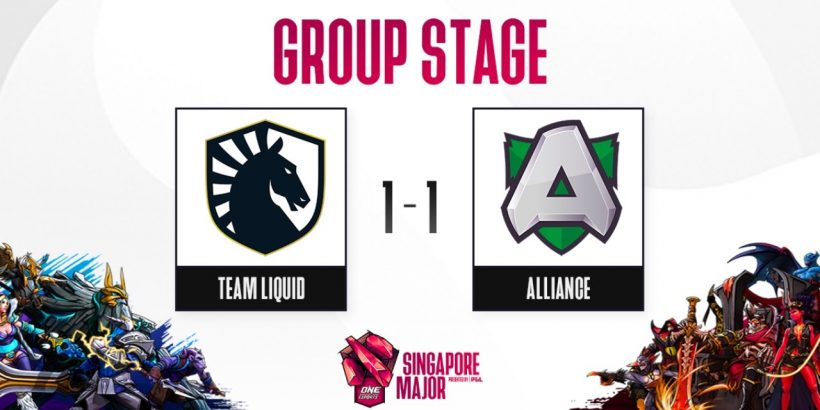 We are now deep in the tournament with the Day 4 of the group stages. ESTNN looks at all the matches from Stream B.

The Day 4 Stream B of group stages had teams Alliance, B Esports x Neon, PSG.LGD, Thunder Predator and Team Liquid battling against each other for places in the playoffs. As the games progressed we kept a close eye on each one to present a recap for people who missed the show.

The first game between Neon and Thunder was equal in the early game, with Thunder looking a bit more in control. Thunder picked Razor to counter Neon’s Troll Warlord, but teamfights looked in Neon’s favor close to the mid-game. Neon had a lot of sustenance with picks like Oracle and Phoenix. It was around the 30-minute mark that Thunder really showed the prowess of their draft. Initiations from Mars and damage from Phantom Assassin, Death Prophet and Razor was too much for Neon who called “Good Game”.

Neon had full control after the early game in their second match. They had plenty of burst physical damage from Templar Assassin and Legion Commander. They had a decent amount of mobility and magical damage coming in from Puck and Earth Spirit. With heroes like Tide Hunter and Wraith King, Thunder couldn’t really match the tempo of the game Neon had put forward. Neon Esports vs Thunder Predator ended in an equal score of 1-1.

Neon played the first game like a typical SEA team. Their early game was filled with small skirmishes which pestered Alliance. With picks like Clockwerk, Tusk, Puck and Slardar, Neon had a very strong start. It was not all Neon in the first game, as Alliance made a pretty promising comeback around the 30-minute mark. However, there was enough space created for Skem’s Juggernaut who was playing carry for Neon. After a successful Roshan, Neon finished the game with good contributions of damage from Puck and Juggernaut.

Alliance tried a few different heroes in their second game. Starting mid with Shadow Fiend and giving Weaver to Nikobaby, Alliance looked solid against Neon. Although there was not much gold difference between both the teams, Neon seemed to gain control from the 30 to 40-minute mark. However, a terrible fight in the Roshan pit took away too much from Neon, giving Alliance the perfect opening they needed to win.

Alliance looked scattered in the first game. The early game was decent for both the teams but repeated attempts from Alliance to take fight for the Aegis failed miserably. This allowed LGD to dominate the game and win it comfortably.

In the second game, Alliance lacked damage to close things off in fights. They had to commit a lot of heroes and resources just to score a kill on LGD’s Spectre. LGD on the other hand were comfortable with their position and farmed with the vast amount of space provided to them by Alliance. Although Nikobaby was a bit farmed on Phantom Assassin, he couldn’t turn the flow of the game. Alliance lost 2-0 to PSG.LGD.

Game one between Alliance and Team Liquid saw a neck to neck fight. Gold advantage between the two was also equal in the early to mid game. It was only around the 30-minute mark that Liquid started pulling ahead with a triple kill on MiCKe’s Phantom Assassin. Alliance barely had a chance to comeback in the game with Qojqva’s Razor and carry PA running the show.

Everyone expected Alliance to lose the second game against Liquid after their recent performances. However, they drafted the game brilliantly. Although Liquid had picked strong heroes like Phantom Lancer and Storm Spirit, Alliance had great advantage of farm on Nikobaby’s Morphling. There is no doubt Nikobaby was MVP in the second game. It was probably his best performance so far in the tournament. Close to the 30-minute mark, Alliance took a great fight which allowed Morphling to shine and take a triple kill.

Liquid still held a sound position with their PL picking up kills. However, the team overextended some fights while pushing high ground. A fight near Liquid’s top Tier 3 proved great for Alliance who got an ultra kill on their Morphling. Alliance outperformed Liquid to win the second game.

The Group Stage of the Major is now a wrap, stay tuned for all the excitement as we move into the Playoffs tomorrow live on the One Esports Twitch.