The news every Call of Duty: Black Ops Cold War fan has been waiting for has finally arrived. Earlier today, Treyarch revealed the brand new Prestige system for its upcoming title. Many fans speculated that the system would take elements from Modern Warfare and previous titles. This speculation was the result of the community widely disliking Modern Warfare‘s take on Prestige. In the end, this speculation turned out to be correct, as the new system is the best of both worlds. There are challenges, extra Prestige levels, seasons, and much more coming in Black Ops Cold War.

Treyarch released a huge blog post that goes into extreme detail about prestiging. While you can read that in its entirety, we’ll be breaking down the highlights and offering direct snippets from that post.

In short, prestiging is back for Black Ops Cold War. However, there’s much more to it than in previous years. In order to keep the same ranking system across Modern Warfare, Warzone, and BOCW though, Treyarch needed to divert from the traditional prestige.

When the game launches on November 13, you’ll have to grind through levels 1-55 (military ranks). This will unlock all of your Create-A-Class items like in every other title. However, once these items are unlocked, you won’t need to unlock them again.

After you hit level 55, you’ll enter Season Level 1. This is basically the first Prestige and you’ll have to work your way up to Season Level 50 and 100 (second and third Prestige). At Season Level 50, you’ll unlock a weapon blueprint and Season Level 100 is the farthest you can go before Season 1 launches. 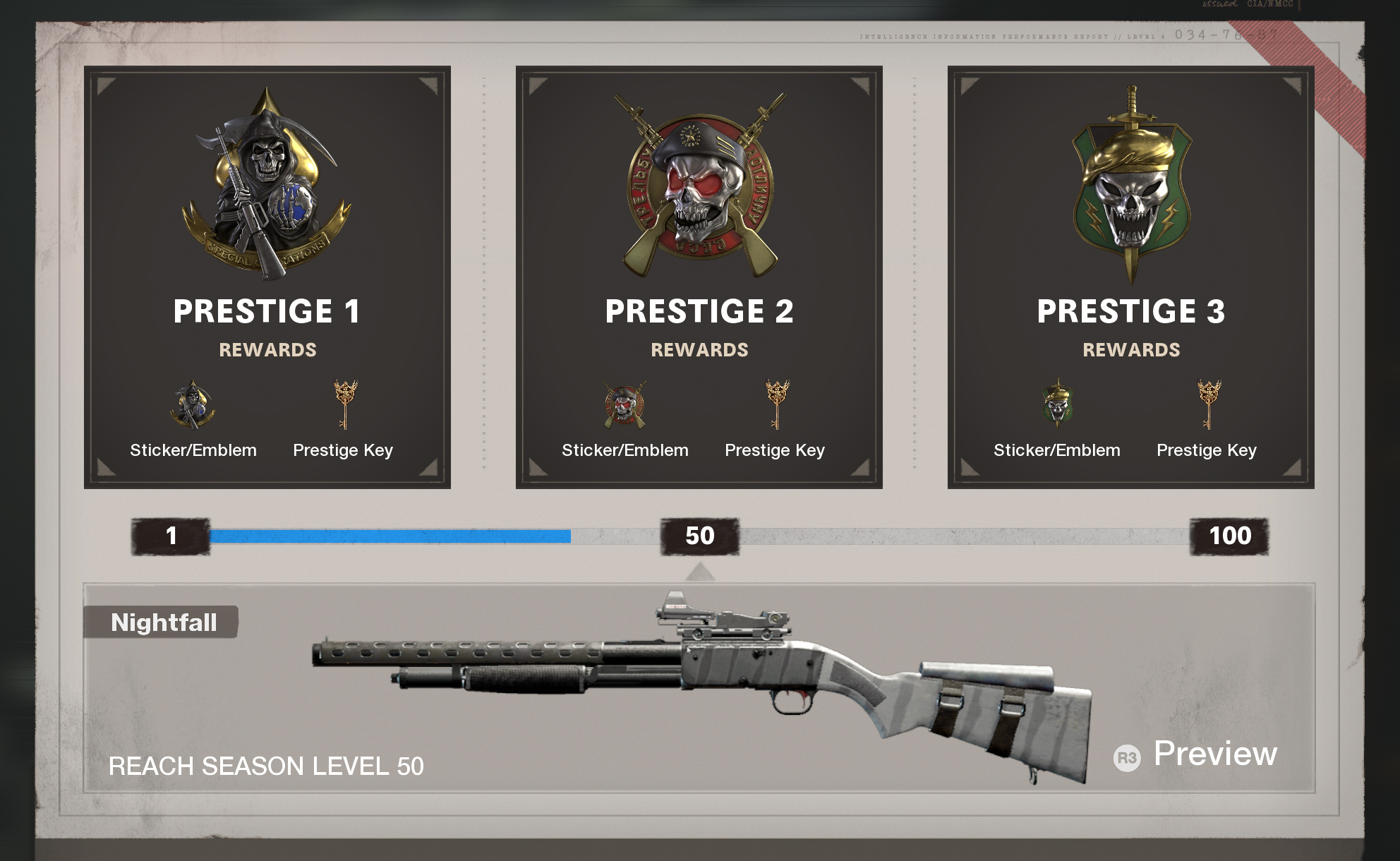 Once Season 1 launches on December 10, your Season Level will be reset to 1. After this happens, you’ll have to work your way back up to Season Level 200. Every 5o levels are considered one Prestige, so Season 1 will feature four prestige. Once you reach level 200, you are done prestiging for that season and will receive the title of Prestige Master. However, you can work up to Season Level 1000 and earn rewards at every 50 levels.

If you do reach Prestige Master, you’ll receive a colored icon next to your name and unlock legacy Prestige emblems. In order to unlock these icons, you’ll need to go to the Prestige Shop. Here, you can unlock emblems from previous Black Ops games in exchange for Prestige Keys. Each time you reach a Prestige in a season, you’ll earn one key to use at the shop.

The last bit of information Treyarch offered concerning the system revolves around Seasonal Challenges. Similar to Officer Rank Challenges in Modern Warfare, these reset with every season. There are two collections of 20 Calling Cards within each season that players have to unlock by completing in-game tasks. One set is for Multiplayer and the other is for Zombies.

If a player completes an entire collection, they’ll unlock an animated Mastery Calling Card. Each new challenge in a collection will be unlocked every 10 levels up to Season Level 200. If you want the Calling Cards, you need to grind.

That’s all of the details we have on the new Prestige system. Make sure to stay tuned to Daily Esports for all Call of Duty news.