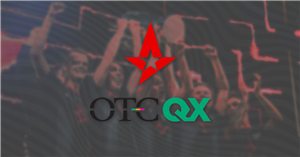 Danish esports organisation Astralis Group has announced its intention to trade in the US market through a dual quotation on the OTCQX Best Market.

According to the release, the organisation has applied to be publicly listed in the country due to ‘growing US investor interest’ in Astralis Group.

If proven successful, US-based investors will be able to purchase Astralis Group shares. The organisation has also stated that the listing is expected to increase liquidity.

Anders Hørsholt, CEO Astralis Group, commented: “We are pleased to potentially trade on the OTCQX Best Market as it will give our current and potential shareholders an additional and larger regulated platform from which they can conveniently trade our shares. From the company’s perspective, it provides added exposure to an expanding US market of esports investors.”

In December 2019, Astralis Group became the first esports team to be publicly listed by entering into the Danish Nasdaq exchange under the ticker ASTGRP. Other publicly listed esports entities include Guild Esports, ESE Entertainment, and Luckbox.

Due to being a publicly listed company, the organisation recently posted its financial report for 2020. Astralis Group claimed ‘satisfactory’ results with its net revenue increasing from £5.59m in 2019 to £5.93m in 2020. The organisation also revealed that 66 percent of its 2020 revenue came from sponsorships.

Astralis Group’s application process to trade on OTCQX is expected to be finalised within four weeks.

Hørsholt added: “Trading on OTCQX will secure increased access for US institutional and retail investors looking to invest in our company and proven business model and it will provide an opportunity to be a part of Astralis Group’s continued development as an international leader in the growing, global esports industry.”

Esports Insider says: Astralis’s decision to enter into the OTCQX Best Market is a smart decision, especially if there is already interest from potential investors. How impactful this process will be for the organisation depends on how much investment is generated.

Considering the size of Astralis’s brand, both in CS:GO and Europe generally, it’ll be interesting to see how US investors see the organisation should it go on OTCQX. Overall, this looks to be one of many steps in the organisation’s planned global expansion.